strikethrough code in markdown on github

I am talking about github markdown here, for files like README.md.

Question: Is it possible to strikethrough a complete code block in markdown on github?

I know how to mark text as a block of code

I also know how to strike through texts using

Independently they work fine, but together not as expected or desired. I tried several combinations of the above mentioned.

For now, I use this:

by using ~~ and ` for every single line.

I would like to have a code formatted text striked through, where the code block is continuous:

or at least with only a small paragraph in between:

unfortunately, also not striked through

Is this possible at all?

I found some old posts and hints on using jekyll, but what I was searching for is a simple way, preferably in markdown.

This would only be possible with raw HTML, which GitHub doesn't allow. But you may be able to use a diff instead.

Code blocks are for "pre-formatted" text only. The only formatting you can get in a code block is the formatting that can be represented in plain text (indentation, capitalization, etc). There is no mechanism to mark up the content of a code block (as bold, italic, stricken, underlined, etc). This was an intentional design decision. Otherwise, how would you be able to show Markdown text in a code block? If you want formatted text, then you need to use something other than a code block.

As the rules state:

HTML is a publishing format; Markdown is a writing format. Thus, Markdown’s formatting syntax only addresses issues that can be conveyed in plain text.

For any markup that is not covered by Markdown’s syntax, you simply use HTML itself.

Therefore you would need to format your own custom HTML code block with the various bits marked up properly:

However, for security reasons, GitHub will strip out any such raw HTML in your Markdown. So while this works where you have full control of the entire stack, on a hosted service it is most likely not possible.

However, I'm assuming you want to show some changes made to a block of code. As it turns out, a specific format already exists for that, namely, a diff. Just use a fenced code block with diff as the language and GitHub will format it correctly:

You can see how GitHub displays the above code block live (you can also see that in raw), but I've included a screenshot below for convenience. 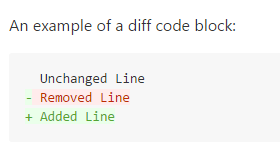 I realize that the formatting does not use strike-through, but it does use a commonly used and understood format. For more complex blocks, you should probably use the diff utility program to generate the diff for you.

This may be obvious to others, but it caught me. When you have indented lines, be sure + or - is the first character on the line or it won't highlight.

After much much trying, I finally got it to work! It boils down to this:

PS.: ``` blocks should always be surrounded by blank lines to work

On the subject of marking up the content of a code block, to tack an italicized string on to the end of a line of "code", try something like:

(You can see this in action at: https://github.com/devonostendorf/post-notif#how-do-you-use-the-stylesheet_filename-attribute-with-the-shortcode)

I had a hard time finding an example that matched this precise use case, so I hope this proves useful for anyone else trying to accomplish a similar effect.

Not the answer you're looking for? Browse other questions tagged github markdown github-flavored-markdown strikethrough or ask your own question.

1882
Comments in Markdown
4446
How do I update or sync a forked repository on GitHub?
1222
GitHub relative link in Markdown file
444
Is there a command line utility for rendering GitHub flavored Markdown?
2896
How to add images to README.md on GitHub?
1481
Changing image size in Markdown
530
Superscript in markdown (Github flavored)?
774
GitHub satanically messing with Markdown - changes 666 to DCLXVI
600
How to draw checkbox or tick mark in GitHub Markdown table?