Is there real value in multi-touch interface for a desktop?

I was lucky enough recently to be involved in a Surface project at Microsoft writing an educational game for an upcoming "trade show". I can really see how the collaborative nature and natural interaction of the Surface could be huge in the education space, I really can't get excited by touch or multi-touch on a "normal" machine.

I can see how multi-touch is useful in a mobile machine like the iPhone, but I just don't see how or why I'd want to put my sticky fingers all over my desktop or laptop, or what software would really take advantage of it (especially if it's restricted to "just" 2 inputs. I'd imagine it's quicker for me to resize a picture with my mouse than it is to reach from the mouse to the screen and do it there :)

Do I just not get it? Is anyone working on exciting multi-touch apps that might change my mind? :)

Apple bought the patent portfolio of a company called FingerWorks so that it could build multitouch into its own devices. FingerWorks made a keyboard replacement called the TouchStream that was the single best input device I have ever owned. 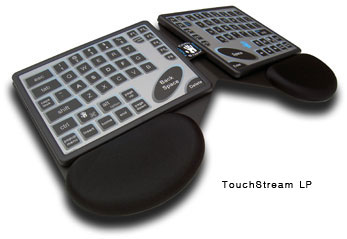 As a keyboard, it allowed me to touch type at full speed with zero force required for a key "press" to register. The right half of the keyboard also acted as a mousepad, complete with left-, right-, and middle-click, double-click, etc. It included multi-finger gestures for cut, copy, paste, zoom in, zoom out, page up, page down, switching apps, and dozens of other common operations for which you'd ordinarily use key combos, special keys, or menus. It allowed me to attach macros to application-sensitive gestures - with a twitch of my left hand, I could compile the app I was working on in Visual C++; the same twitch did other things in other apps. A different twitch could be tied to another macro, or insert an HTML template, etc.

My productivity was improved greatly by this device - I never had to move my hands away from the home row to use a mouse or to execute a gesture, and I could still use regular old Ctrl-Alt-Shift-foo key combos if I needed to (which of course one does, in emacs).

I miss the TouchStream greatly, but unfortunately the mechanical design of the thing was fragile, and after the company disappeared I opted to sell the keyboard (for significantly more than I paid for it - the TouchStream enthusiast community is still out there) rather than put up with an unplanned breakage.

All this to say: Those who pooh-pooh the idea of multi-touch being the primary interface - especially for programmers - have simply not seen it done well. I have. And I'm ready for it to come back.

Check out the concept video for 10/GUI for a taste in how a multi-touch desktop might work.

I think the core concept here is that multi-touch has some domains where it excels (like iPhone and Surface), while it would probably fail for mundane tasks that you would perform every day with a computer.

My Macbook Air has multi-touch (to an extent), but I never really seem to use it other than the 2 finger scrolling. It would be interested to know the usability stats behind multi-touch interfaces like Macbook Air where it is not the primary source of input/use.

You'll have to pry my keyboard out of my cold, dead hands.

IT professionals, productivity workers and software developers are infinitely more productive with a real keyboard than anything else. I also have a problem with the notion of all this "up in the air", Minority Report-like interface - nobody has the upper arm strength to keep their hands in that position all day long. I further question the precision they expose as compared to a conventional mouse or trackball.

Well maybe I could see multi-touch on a laptop to tablet. If the screen does not get to dirty. But I really see the touchless SDK (http://www.codeplex.com/touchless/Release/ProjectReleases.aspx?ReleaseId=17986) making multi-touch more approachable for home use. Where you can do gestures in the air in front of you web cam to give the computer commands or control picture sizes and orientation.

I think the only real advantage is in replacing your mouse.

I find Apples multi-touch touchpad much more natural these days than a PC touchpad. I never thought I'd get used to only having one button, now two buttons are just annoying when resting two fingers on the touchpad (which you are already touching anyway) and clicking does the same thing.

I think it would have to be the same kind of thing with your computer display. Imagine three of them embedded in a non-programmers desktop at, say a 30 degree angle with no external input device.

It would be extremely natural to use, and much more "Lightweight" than having to deal with a keyboard and mouse.

I agree with Sarat, multi touch will have its own areas to excel in. I also think that once multi touch becomes more mainstream people will get used to it and applications will follow. Interacting with a computer can change profoundly (multi touch also means multi user) and can make it more social. I'm keeping an eye on the technology because it might become a big thing in the future.

Not the answer you're looking for? Browse other questions tagged pixelsense multi-touch or ask your own question.