How to override the path of PHP to use the MAMP path?

After screwing up entirely my PHP configuration on MAC trying to get the SOAP module working (-bash: /usr/bin/php: No such file or directory ....) I now have to use MAMP but each time I have to type the path

How to just type php instead the entire path on MAC ? I double checked and i do not have a file named .profile nor bash_profile

In your home folder /Users/David for exmaple, you can create a .bash_profile. In here you can export variables and then add them to your path.

Open up the file to edit it in your favourite editor, I use vim.

Then you can add in your path

You want your bit ahead of the $PATH as that already includes /usr/bin which is where the system PHP lives. So the system will always find your MAMP version first.

Save this file and then reboot your Terminal and you'll see that you should get your MAMP version.

To test I use php -v as OSX Lion uses 5.3.10 and my MAMP is using 5.3.6
You can also test using which php which will output the path to your current php executable.

The fact that the previously accepted answer refers to php 5.3.6, while the current version of MAMP ships with 7.2.1 as the default (as of early 2018), points out that this is not a very sustainable solution. You can make your path update automatically by adding an extra line to your .bash_profile or .zshrc to get the latest version of PHP from /Applications/MAMP/bin/php/ and export that to your path. Here’s how I do it:

(Use source ~/.bash_profile after making your changes to make sure they take effect.)

As others have mentioned, you will likely also want to modify your shell to use MAMP’s mysql executable, which is located in /Applications/MAMP/Library/bin. However, I do not recommend exporting that folder, because there are a bunch of other executables there, like libtool, that you probably don’t want to be giving priority to over your system installed versions. This issue prevented me from installing a node package recently (libxmljs), as documented here.

My solution was to define and export mysql and mysqladmin as functions:

I used functions instead of aliases, because aliases don’t get passed to child processes, or at least not in the context of a shell script. The only downside I’ve found is that running which mysql and which mysqladmin will no longer return anything, which is a bummer. If you want to check which mysql is being used and make sure everything is copacetic, use mysql --version instead.

Note: @julianromera points out that zsh doesn’t support exporting functions, so in that case, you’re best off using an alias, like alias mysql='/Applications/MAMP/Library/bin/mysql'. Just be aware that your aliases might not be available from subshells (like when executing a shell script).

Everytime you save MAMP config (PHP section), it saves the current version of PHP on ~/.profile file and creates the alias for php, pear and pecl, to point to the current configured version. (Note: you need to check "Make this version available on the command line" option in MAMP)

However, you need to refresh your terminal (open another session) to get this file refreshed. You can also type source ~/.profile to refesh the aliases manually.

If you want to extract this curerent version in a PHP_VERSION variable - as commented above - for further use, you can do:

And then you'll have $PHP_VERSION available with the current version of MAMP.

Finally, if you want to run your php using the current configured version on mamp, you just need to add to your ~/.bash_profile the following:

Now, even script that relies on /usr/bin/env php will read the correct version from Mamp config.

I found that on Mavericks 10.8 there wasn't a .bash_profile and my paths were located in /etc/paths

In order to have the new path (whether this is a mamp or brew install of php) take effect it needs to be above the default /usr/bin/php in this paths file. eg.

AFter the change, open a new terminal window and run 'which php' that should now point to your updated path

edit as follows below, save, quite and restart terminal or alternately

and in the fashion of the DavidYell's post above, also add the following. You can stack various variables by exporting them followed by a single PATH export which I demonstrated below

If you have to type

in your command line then add

to your PATH to be able to call php from anywhere.

This one worked for me:

For XAMPP users you can use this:

And you can check it with:

Sometimes, it's easier to do this:

Mamps version of PHP at the time of posting was php5.6.10, so make sure you change that to the version you're using.

You'll be up in a jiffy.

Explanation: Terminal / Mac tries to run a search on the PATHS it knows about, in a hope of finding the program, when user initiates a program from the "Terminal", hence the trick here is to make the terminal find the php, the user intends to, by pointing it to the user's version of PHP at some bin folder, installed by the user.

P.S I'm still a lost sheep around my new Computer ;) 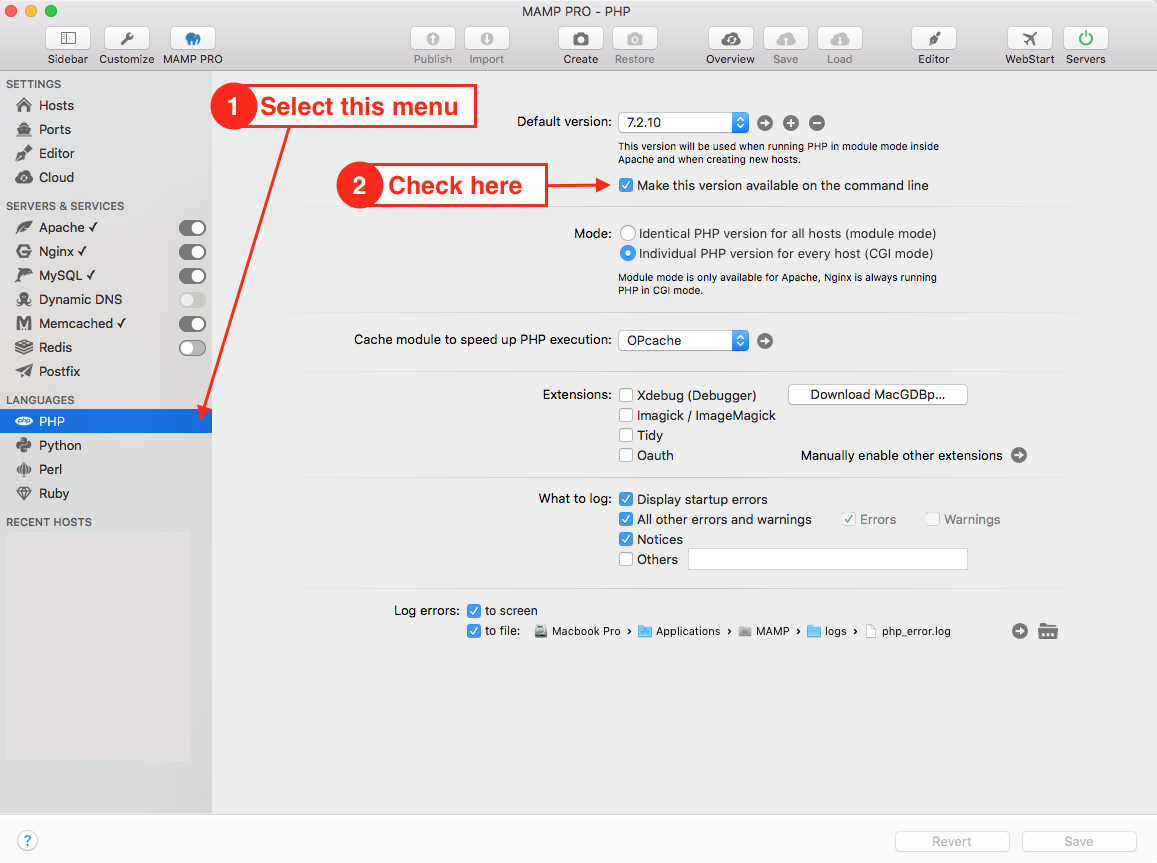 This is not an ideal solution as you have to manage two ini files however, I managed to work around this on windows by copying the php ini file in mamp from the conf folder to your active php version in the bin folder.

To compliment the current accepted answer, if you assume that MAMP uses the most recent version of php5 as the default, you can add grep 'php5' in the middle:

and you are guaranteed to get the most recent php5 regardless of MAMP version.

Not the answer you're looking for? Browse other questions tagged php macos shell path mamp or ask your own question.