How can I back out a merge in Mercurial and later remerge with that branch?

I have two branches, default and branch1. By mistake one person in our team merged branch1 with default. The content in branch1 is not yet ready to merge with default (it contains a major rework of the build & deploy environment).

We did an experiment with 'hg backout', backing out the merge (not sure this is the right way to do it). Then the changes from branch1 gets deleted on default, which is fine - but we can not remerge with branch1.

How should we solve this issue?

There are many scenarios here where you might want to do this, I'll make each scenario a headline, so that you can find the scenario that fits your case. Note that I'm still learning Mercurial, and I'd like pointers if something I say is wrong, using the wrong terminology, could be done better, etc.

No further changes, merge not shared (no pushes/pulls)

The programmer has merged, but not done anything else, nor has (s)he shared the changes with anyone, in any way

In this case, simply discard the local clone, and get a fresh clone from a safe repository.

Local changes on top of merge, not shared

The programmer has merged, and continued working based on that merge. The changesets that followed the merge should be kept, but the merge itself should be removed. The changes (merge + following changesets) have not been shared with anyone

In this case I would do one of four:

To get rid of the merge changeset + all the following changesets, there's a couple of options:

Merge pushed to others, control over clones

The programmer has pushed to master repository, or to someone else, or someone pulled from the programmers repository. However, you (as in the group of developers) have control over all the repositories, as in, you can contact and talk to everyone before more work is done

In this case, I would see if step 1 or 2 could be done, but it might have to be done in a lot of places, so this might involve a lot of work.

Merge pushed, you don't have control over clones

The programmer pushed the mergeset, and you don't know who will have the merge changeset. In other words, if you succeed in eradicating it from your repositories, a stray push from someone who still has it will bring it back.

Ignore the merge changeset and work in the two branches as though it never happened. This will leave a dangling head. You can then later, when you've merged the two branches, do a null-merge for this head to get rid of it.

Then later you merge the two, the real merge you want:

You can then do a null-merge to get rid of the dangling head. Unfortunately I don't know how to do that except through TortoiseHg. It has a checkbox where I can discard the changes from one of the branches.

With TortoiseHg, I would update to the merge I want to keep (the topmost, lowercase m), then select and right-click on the dangling merge head below, and then check the "Discard all changes from merge target (other) revision": 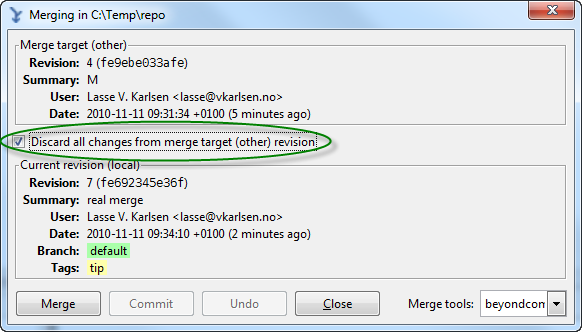 We did an experiment with 'hg backout', backing out the merge (not sure this is the right way to do it). Then the changes from branch1 gets deleted on default, which is fine - but we can not remerge with branch1.

I use backout for merge cancel. You can not remerge, but you able to "backout backout merge", i.e. when you want remerge, you make 'hg backout' on "Backed out merge changeset ..." commit and then merge branch again.

Thanks to everyone for the great input! Since we were kind of in a rush to solve the problem, and our group is relatively new to Mercurial, we used a very pragmatic solution.

On our repository server we created a new repository, then we cloned the old repository up until the revision right before the merge. Then pushed the new clone to the server and sent out the new link to everyone. Luckily we are a quite small development team.

Perhaps not the most cosher way to solve the problem, but it worked :)

You cannot really backout a merge nicely. IMO, the best way to handle this would be just to abandon the merge and continue the strand of changesets from before the merge, leaving a dangling head (which can be stripped). If other changes have happened since the merge, they can be rebased onto the new "good" head.

This answer assumes that you have already pushed

I love HG and use it avidly, but their idea of a branch can drive someone batty when coupled with a history that is (by design) intentionally immutable.

I usually clone a backup (locally) of the repo prior to doing a branch merge, for just this reason. I always check before pulling.

Eric Raymond is working on something that is more or less DVCS agnostic that can (hopefully) help in situations just like the oops you described, but I don't think he's going to have HG support fully implemented for another week or two. Still, it might be worth watching.

But, only useful if nobody has pulled the 'ooopsie' tip.

I had this exact issue. A coworker accidentally merged my branch into the default branch while it was still incomplete. Initially I just backed out that merge which seemed to work fine until I wanted to merge my branch into default for keeps. Files that I needed were being marked for deletion upon merging.

The solution was to go all the way back to my original back out that fixed my coworker's mistake and back out that back out. This stopped the files from being marked as deleted and let me successfully merge my branch into default.

Not the answer you're looking for? Browse other questions tagged version-control mercurial dvcs or ask your own question.

39
How to merge to get rid of head with Mercurial command line, like I can do with TortoiseHg?
16
Mercurial - backout an old merge
24
Mercurial: Any way to "merge and discard changes"?
1
Mercurial: How to re-include ignored files after the merge

2999
I ran into a merge conflict. How can I abort the merge?
77
Backing Out a backwards merge on Mercurial
854
Git for beginners: The definitive practical guide
1025
Git workflow and rebase vs merge questions
19181
How do I delete a Git branch locally and remotely?
633
How to get back to the latest commit after checking out a previous commit?
250
Mercurial — revert back to old version and continue from there
44
How to catch-up named mercurial branch from default branch without merging the two into one?
210
Mercurial: Can I rename a branch?
4
How can I back out a backout of a merge in mercurial?