Why is "npm install" really slow?

What am I doing wrong when setting up my packages ? Is there any way to speed this up ?

When inside the folder if I run

I get the following which can take hours to fully setup: 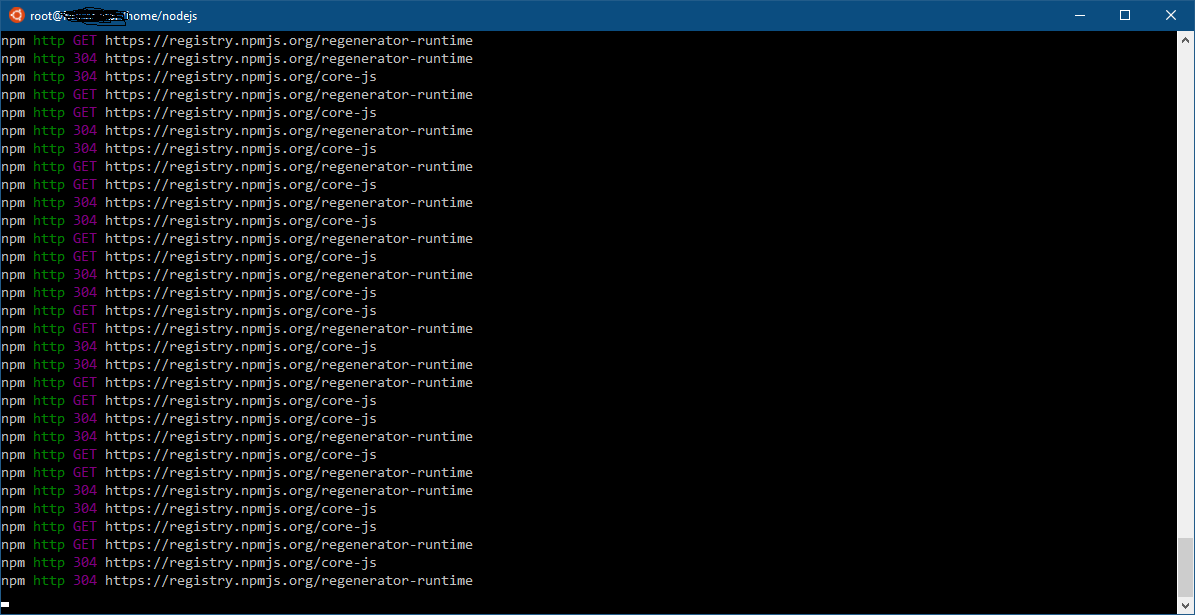 This is not a general computing or hardware issue. Comparative speeds are below :

I suspect there is something wrong with my packages.json or the command I am running npm install. From the image, it seems there are numerous attempts to retrieve the same file. Possibly there is a way to force npm to retrieve from a more stable mirror ? Possible the mirror selection it uses by default is wonky ? Just some suggestions -- I don't know the specific cause which is why I am asking.

This problem also occurs on my Linode, Digital Ocean, and VULTR boxes -- so I suspect it is something specific with npm, the way I am using (something missing), or my packages.json.

I was able to resolve this from the comments section; outlining the process below.

I installed modules here in less than 1 min with your package.json with npm v3.5.2 and node v4.2.6. I suggest you update node and npm.

v1.3.0 didn't even have flattened dependencies introduced on v3 that resolved a lot of annoying issues

Generally speaking, don't rely on package managers like apt to maintain up-to-date software. I would strongly recommend purging the node/npm combo you installed from apt and following the instructions on nodejs.org to install the latest release.

Following their advice, I noticed that CentOS, Ubuntu, and Debian all use very outdated versions of nodejs and npm when retrieving the current version using apt or yum (depending on operating systems primary package manager).

Get rid of the outdated nodejs and npm

To resolve this with as minimal headache as possible, I ran the following command (on Ubuntu) :

The next objective was to get a current version of both nodejs and npm which I can snag nodejs directly from here and either compile or use the binary, however this would not make it easy to swap versions as I need to (depending on age of project).

I came across a great package called nvm which (so far) seems to manage this task quite well. To install the current stable latest build of version 7 of nodejs :

Use nvm to install nodejs 7.x

After installation I was pleasantly surprised by much faster performance of npm, that it also now showed a pretty progress bar while snagging packages.

For those curious, the current (as of this date) version of npm should look like the following (and if it doesn't, you likely need to update it):

DO NOT USE YOUR OS PACKAGE MANAGER TO INSTALL NODE.JS OR NPM - You will get very bad results as it seems no OS is keeping these packages (not even close to) current. If you find that npm is running slow and it isn't your computer or internet, it is most likely because of a severely outdated version.

I am using Linux and have nvm and working with more than 7 version of node As of my experience I experienced the same situation with my latest project (actually not hours but minutes as I can't wait hours because of hourly project :))

Disclaimer: don't try below option until you know how cache clean works

and then all working fine for me so it's looks like sometimes npm's cache gets confused with different versions of Node.

Official documentation of Npm cache can be found here

I see from your screenshot that you are using WSL on Windows. And, with Windows, comes virus scanners, and virus scanning can make NPM install very slow!

Adding an exemption or disabling virus scanning during install can greatly speed it up, but potentially this is undesirable given the possibility of malicious NPM packages

I have not profiled extensively myself though

Problem: NPM does not perform well if you do not keep it up to date. However, bleeding edge versions have been broken for me in the past.

Solution: As Kraang mentioned, use node version manager nvm, with its --lts flag

Then use this often to upgrade to the latest "long-term support" version of NPM:

Big caveat: you'll likely have to reinstall all packages when you get a new npm version.

I was having this problem and none of the solutions in SO helped. I figured it out so I am posting it here in case any one else has a similar issue.

I was trying to run npm i on an amazon instance. The problem ended up being the fact that linux only opens up a certain amount of ports, and when npm i runs, it opens like more than a thousand connects to the registry to download all the packages. So it would work but then just freeze for like 15 minutes. Then the timeout would occur and it would eventually move on to another port. So in my security group in AWS I added a rule for All TCP at 0.0.0.0/0 in outgoing only, letting npm open as many outgoing connections as it likes and that fixed it.

I was having the same problem, i am on the nodejs version: 8.9.4 and npm version: 5.6.0. I tried a lot solutions online, including the ones on this post, none worked for me, then i found about yarn package manager which solved the problem for me, so if all fails, i think "yarn" is worth checking out.

It seems npm has problems when it is outdated, updating it has helped me as well.

This link helped me boost npm installs. Force npm to use http over https and disable progress display.

I had the same problem on Debian, yarn was the solution for me.

we also have had similar problems (we're behind a corporate proxy). changing to yarn at least on our jenkins builds made a huge difference.

there are some minor differences in the results between "npm install" and "yarn install" - but nothing that hurts us.

I had similar problems. I was also confused by some solutions leaving me with different versions displaying for different users. If you have any problems at all, I would first check every account your using any implementation of node

Finally, this solution appears to solve this issue 100%, giving me the confidence that my versions were universal no matter what user privileges I wanted to use:

If you're still having a problem, next try looking inside your /usr/local/bin directory. If you find either a large binary document named node or a folder named npm, delete them.

Personally, before I deleted those, two of my user accounts were using the latest version of node/npm installed correctly via nvm, while a third account of mine remained stubborn by still using a far older installation of both node and npm apparently located inside my /usr/local/bin/ directory. As soon as I deleted both of them with the two above commands, that problematic user account implicitly began running the correct installation, having all three accounts mutually the intended versions.

(Implemented while using Centos 7 Blank x64. Some source code used above was originally supplied by 'phoenixNAP Global IT services' 1)

This didn't work well for me (didn't remove everything):

but this did solve my issue:

There's one more element of Windows that causes NPM to be slow as well. Windows is notoriously heavy when downloading files in general, this is normally not noticed because most of the time we are downloading a single file or zip of files and so we are only downloading from a single source and file.

With npm we are downloading 1000s of files that can get easily into the GBs total download. The way this was described to me in the past, and might be a bit too simplistic, but it made it make sense to me is: Each file that Windows downloads is wrapped in whatever network protocol is being used (TCP) and then run through Windows networking. Usually is negligible, but in the case of these tiny 1kb files it explodes.

Wish I had a more official source for you, so if anyone can help me provide one I'd be grateful. Best I found was this: https://with.raidrive.com/t/very-slow-download-speed-with-small-files/3423/4

For me I'm the source, as we ran into this problem a long time ago when we used to run SVN. It was super slow and we found it was the combination of the network packets and the virus scanner.

install nvm and try it should help, use below command:-

I found this solution in Windows:

Note that if you need to publish your own package in the future, you need to rollback this change:

One thing I noticed is, if you are working in new project(folder) you have to reconfigure proxy setting for the particular path

1630
How do I completely uninstall Node.js, and reinstall from beginning (Mac OS X)
8
npm is really slow while installing/updating packages from private git repositories
0
create-react-app my-app takes 2 - 2.5 hours? Any idea why?

1342
Where does npm install packages?
1991
How can I update NodeJS and NPM to their latest versions?
2771
Find the version of an installed npm package
1361
How can I uninstall npm modules in Node.js?
1124
How to install a previous exact version of a NPM package?
1871
What is the difference between Bower and npm?
2632
What's the difference between dependencies, devDependencies and peerDependencies in npm package.json file?
2811
What is the --save option for npm install?
2184
Do I commit the package-lock.json file created by npm 5?
858
Why does "npm install" rewrite package-lock.json?