I have created ANN with two RELU hidden layers + linear activation layer and trying to approximate simple ln(x) function. And I am can't do this good. I am confused because lx(x) in x:[0.0-1.0] range should be approximated without problems (I am using learning rate 0.01 and basic grad descent optimization).

For the configuration above NN is just learning to guess y = -1.00. I have tried different learning rates, couple optimizers and different configurations with no success - learning does not converge in any case. I did something like that with logarithm in past in other deep learning framework without problem.. Can be the TF specific issue? What am I doing wrong?

What your network has to predict 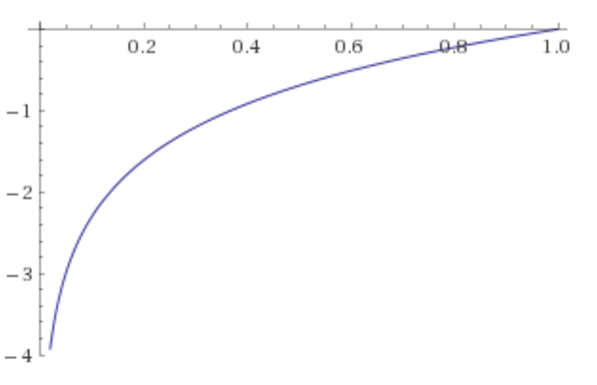 What your architecture is

My first thought was that ReLU is the problem. However, you don't apply relu to the output, so that should not cause the problem.

Changing the initialization (from uniform to normal) and the Optimizer (from SGD to ADAM) seems to fix the problem:

Training this for 1 minute gave me:

So the answer might be that your optimizer is not good / the optimization problem starts at a bad point. See

The following image is from Alec Radfords nice gifs. It does not contain ADAM, but you get a feeling for how much better one can do than SGD:

However, my experience with regression problems is quite limited.

First of all, your input data is in range [0, 1), which is not a good input to a neural network. Subtract mean from x after computing y to make it normalized (also ideally divide by standard deviation).

However, in your particular case it was not enough to make it work.

I played with it and found two ways to make it work (both require data normalization as described above):

My guess would be that 10 neurons do not have sufficient representation power to pass enough information to the last layer (obviously, a perfectly smart NN would learn to ignore the second layer in this case passing the answer in one of the neurons, but the theoretical possibility doesn't mean that gradient descent will learn to do so).

I have not look at the code but this is the theory. If you use an activation function like "tanh", then for small weights the activation function is in the linear region and for large weights the activation function is either -1 or +1. If you are in the linear region across all layers then you can not approximate complex functions (i.e. you have a sandwich of linear layers hence the best you can do is linear aproximations) but if you have bigger weights then the nonlinearly allow you to approximate a wide range of functions. There are no free lunches, the weights need to be at the right values to avoid over-fitting and under-fitting. This process is called regularization.

Not the answer you're looking for? Browse other questions tagged tensorflow neural-network regression deep-learning gradient-descent or ask your own question.