Why is Collections.counter so slow?

I'm trying to solve a Rosalind basic problem of counting nucleotides in a given sequence, and returning the results in a list. For those ones not familiar with bioinformatics it's just counting the number of occurrences of 4 different characters ('A','C','G','T') inside a string.

I expected collections.Counter to be the fastest method (first because they claim to be high-performance, and second because I saw a lot of people using it for this specific problem).

But to my surprise this method is the slowest!

Method 1 is way faster than method 2 and 3 for both experiments!!

So I have a set of questions:

It's not because collections.Counter is slow, it's actually quite fast, but it's a general purpose tool, counting characters is just one of many applications.

On the other hand str.count just counts characters in strings and it's heavily optimized for its one and only task.

That means that str.count can work on the underlying C-char array while it can avoid creating new (or looking up existing) length-1-python-strings during the iteration (which is what for and Counter do).

Just to add some more context to this statement.

A string is stored as C array wrapped as python object. The str.count knows that the string is a contiguous array and thus converts the character you want to co to a C-"character", then iterates over the array in native C code and checks for equality and finally wraps and returns the number of found occurrences.

On the other hand for and Counter use the python-iteration-protocol. Each character of your string will be wrapped as python-object and then it (hashes and) compares them within python.

So the slowdown is because:

Note the reason for the slowdown is similar to the question about Why are Python's arrays slow?.

I did some additional benchmarks to find out at which point collections.Counter is to be preferred over str.count. To this end I created random strings containing differing numbers of unique characters and plotted the performance:

and the result was plotted using matplotlib:

The results for Python 3.6 are very similar so I didn't list them explicitly. 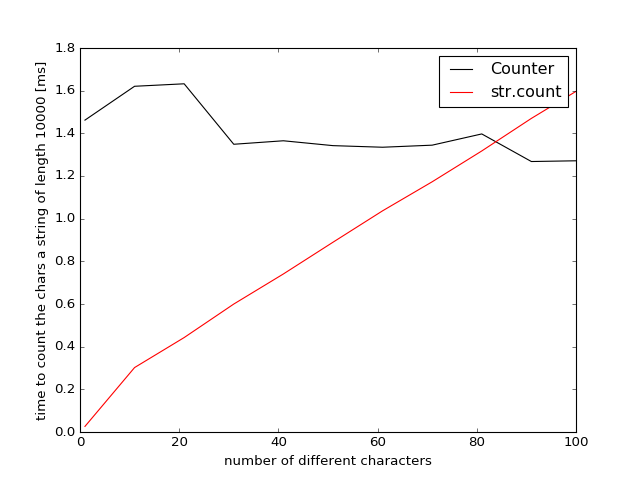 So if you want to count 80 different characters Counter becomes faster/comparable because it traverses the string only once and not multiple times like str.count. This will be weakly dependent on the length of the string (but testing showed only a very weak difference +/-2%). 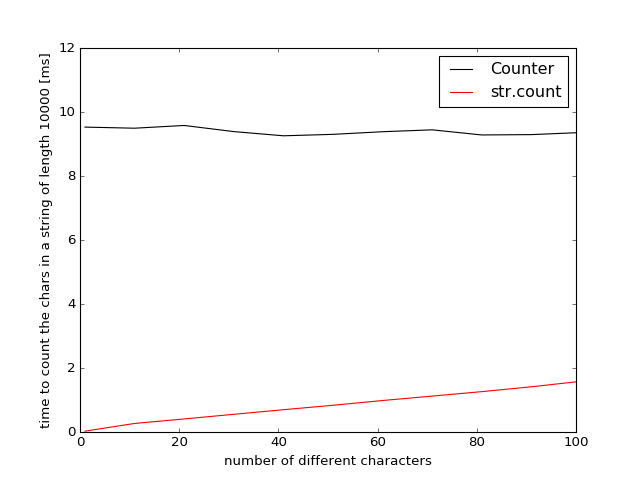 In Python-2.7 collections.Counter was implemented using python (instead of C) and is much slower. The break-even point for str.count and Counter can only be estimated by extrapolation because even with 100 different characters the str.count is still 6 times faster.

The time difference here is pretty simple to explain. It all comes down to what runs within Python and what runs as native code. The latter will always be faster since it does not come with lots of evaluation overhead.

Now that’s already the reason why calling str.count() four times is faster than anything else. Although this iterates the string four times, these loops run in native code. str.count is implemented in C, so this has very little overhead, making this very fast. It’s really difficult to beat this, especially when the task is that simple (looking only for simple character equality).

Your second method, of collecting the counts in an array is actually a less performant version of the following:

Here, all four values are individual variables, so updating them is very fast. This is actually a bit faster than mutating list items.

The overall performance “problem” here is however that this iterates the string within Python. So this creates a string iterator and then produces every character individually as an actual string object. That’s a lot overhead and the main reason why every solution that works by iterating the string in Python will be slower.

The same problem is with collection.Counter. It’s implemented in Python so even though it’s very efficient and flexible, it suffers from the same issue that it’s just never near native in terms of speed.

As others have already noted, you are comparing fairly specific code against fairly general one.

Consider that something as trivial as spelling out the loop over the characters you are interested in is already buying you a factor 2, i.e.

Your method1() is the fastest but not the most efficient, as the input is looped through entirely for each char you are inspecting, thereby not taking advantage of the fact that you could easily short-circuit your looping as soon as a character gets assigned to one of the character classes.

Unfortunately, Python does not offer a fast method to take advantage of the specific conditions of your problem. However, you could use Cython for this, and you would then be able to outperform your method1():

Not the answer you're looking for? Browse other questions tagged python performance collections counter bioinformatics or ask your own question.

297
numpy: most efficient frequency counts for unique values in an array
157
Why are Python's arrays slow?
5
Count characters in a string from a list of characters
3
Why does a dictionary count in some cases faster than collections.Counter?
3
Rewrite char frequency of string as comprehension
-1
Python List and count all unique values in list
0
Fastest way of merging (while preserving values) multiple dictionaries in Python?
1
How to parse a Timestamp() with Python?
0
Calculate rolling sum of array in PySpark and save as dict?