Use placeholders in yaml

Is there a way to use placeholders in yaml like this:

Consider the following example YAML. It is well-formed YAML syntax, however it uses (non-standard) curly-brace placeholders with embedded expressions.

The embedded expressions do not produce the desired result in YAML, because they are not part of the native YAML specification. Nevertheless, they are used in this example only to help illustrate what is available with standard YAML and what is not. 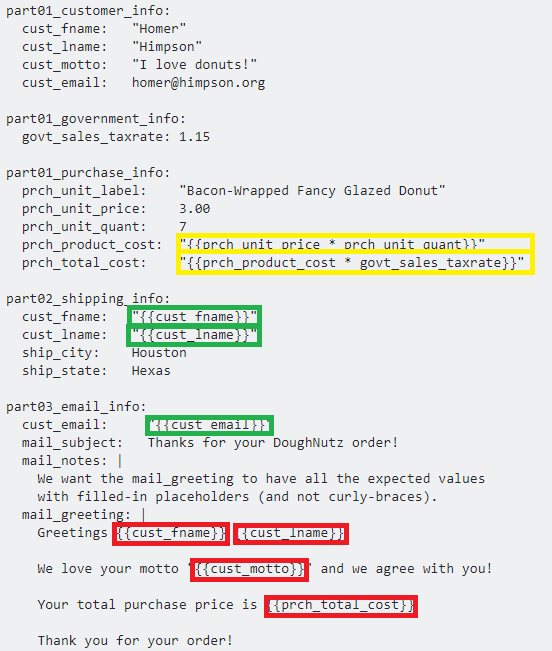 A frequently-requested feature for YAML is the ability to insert arbitrary variable placeholders that support arbitrary cross-references and expressions that relate to the other content in the same (or transcluded) YAML file(s).

YAML supports anchors and aliases, but this feature does not support arbitrary placement of placeholders and expressions anywhere in the YAML text. They only work with YAML nodes.

YAML also supports custom type declarations, however these are less common, and there are security implications if you accept YAML content from potentially untrusted sources.

There are YAML extension libraries, but these are not part of the native YAML spec.

I suppose https://get-ytt.io/ would be an acceptable solution to your problem

With Yglu Structural Templating, your example can be written:

Disclaimer: I am the author or Yglu.

Not the answer you're looking for? Browse other questions tagged yaml computed-properties indirection template-variables or ask your own question.

310
How can I include a YAML file inside another?
151
how to reference a YAML “setting” from elsewhere in the same YAML file?
63
How to set dynamic values with Kubernetes yaml file
82
Use YAML with variables
38
Passing variables inside rails internationalization yml file
14
String interpolation in YAML
13
How to use Property placeholders in .yml file
9
Ruby strings with embedded variables
10
How do I use variables in a YAML file?
6
Can one YAML object refer to another?
See more linked questions

777
What is the difference between YAML and JSON?
663
How can I parse a YAML file in Python
1457
How do you do block comments in YAML?
2
Symfony2 YAML parsing fails
96
Is there YAML syntax for sharing part of a list or map?
369
How do I install the yaml package for Python?
449
YAML: Do I need quotes for strings in YAML?
375
Is it .yaml or .yml?
0
How to set the values from command line for placeholders in spring-boot's Yaml file