Is this the correct way of whitening an image in python?

I am trying to zero-center and whiten CIFAR10 dataset, but the result I get looks like random noise!
Cifar10 dataset contains 60,000 color images of size 32x32. The training set contains 50,000 and test set contains 10,000 images respectively.
The following snippets of code show the process I did to get the dataset whitened :

and trying to show the resulting image :

Could this be a visualization issue only? if so how can I make sure thats the case?

Update :
Thanks to @AndrasDeak, I fixed the visualization code this way, but still the output looks random : 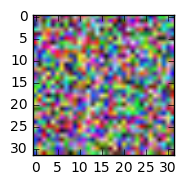 Update 2:
This is what I get when I run some of the commands given below : As it can be seen below, toimage can show the image just fine, but trying to reshape it, messes up the image. 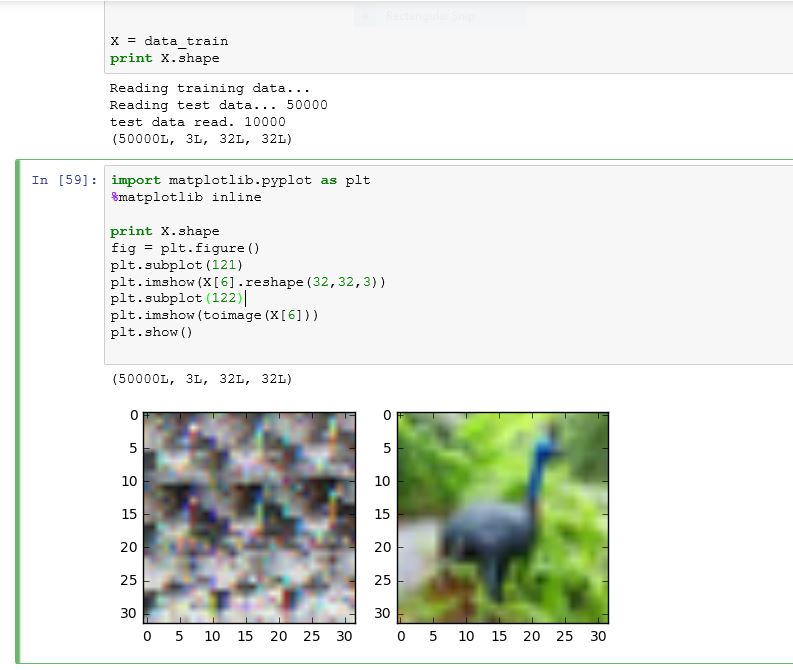 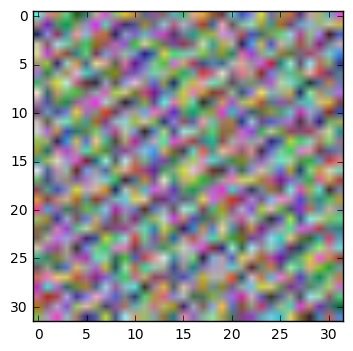 for some wierd reason, this was what I got at first , but then after several tries, it changed to the previous image. 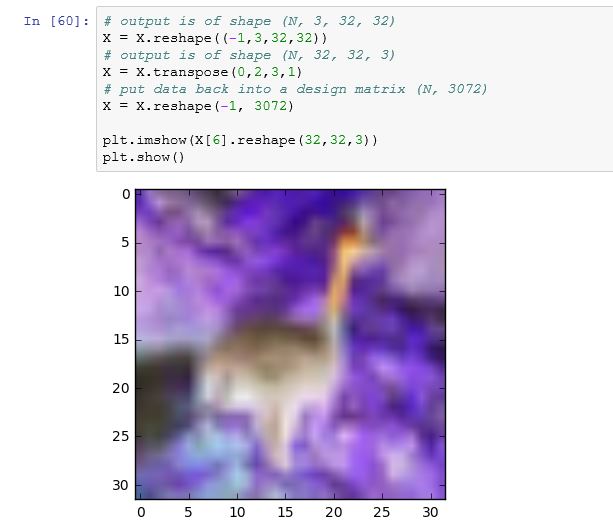 Let's walk through this. As you point out, CIFAR contains images which are stored in a matrix; each image is a row, and each row has 3072 columns of uint8 numbers (0-255). Images are 32x32 pixels and pixels are RGB (three channel colour).

It turns out that the columns are ordered a bit funny: all the red pixel values come first, then all the green pixels, then all the blue pixels. This makes it tricky to have a look at the images. This: 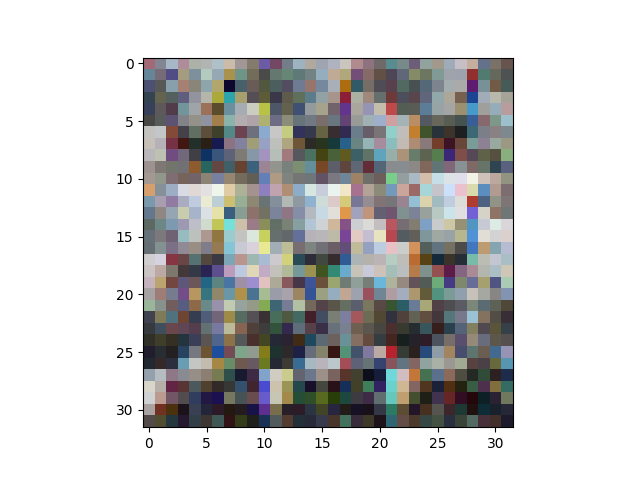 So, just for ease of viewing, let's shuffle the dimensions of our matrix around with reshape and transpose: 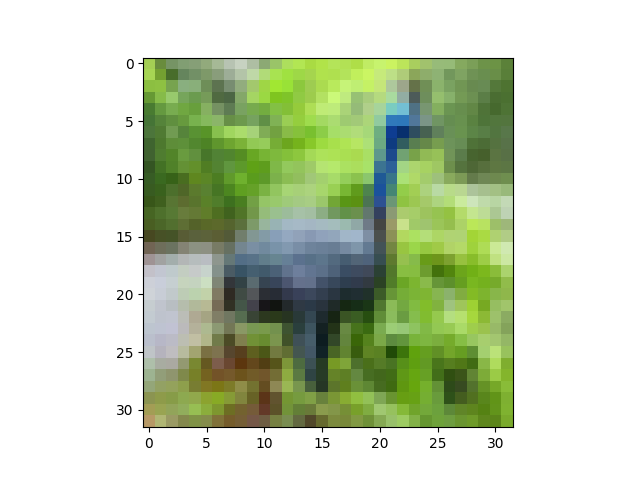 OK, on to ZCA whitening. We're frequently reminded that it's super important to zero-center the data before whitening it. At this point, an observation about the code you include. From what I can tell, computer vision views color channels as just another feature dimension; there's nothing special about the separate RGB values in an image, just like there's nothing special about the separate pixel values. They're all just numeric features. So, whereas you're computing the average pixel value, respecting colour channels (i.e., your mean is a tuple of r,g,b values), we'll just compute the average image value. Note that X is a big matrix with N rows and 3072 columns. We'll treat every column as being "the same kind of thing" as every other column.

At this point, let's also do Global Contrast Normalization, which is quite often applied to image data. I'll use the L2 norm, which makes every image have vector magnitude 1:

One could easily use something else, like the standard deviation (X = X / np.std(X, axis=0)) or min-max scaling to some interval like [-1,1].

Nearly there. At this point, we haven't greatly modified our data, since we've just shifted and scaled it (a linear transform). To display it, we need to get image data back into the range [0,1], so let's use a helper function:

The peacock looks slightly brighter here, but that's just because we've stretched its pixel values to fill the interval [0,1]: 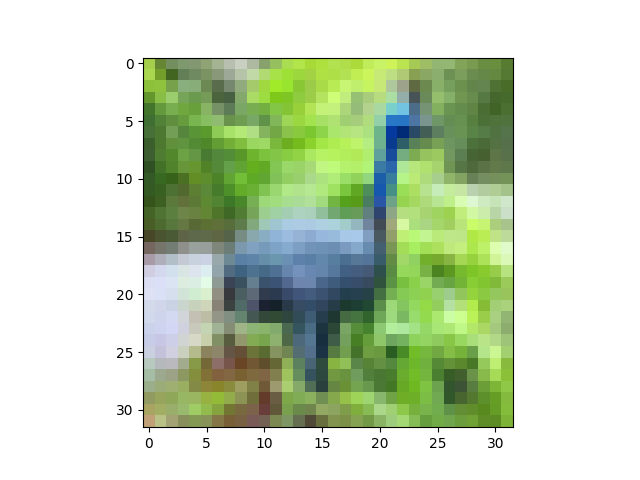 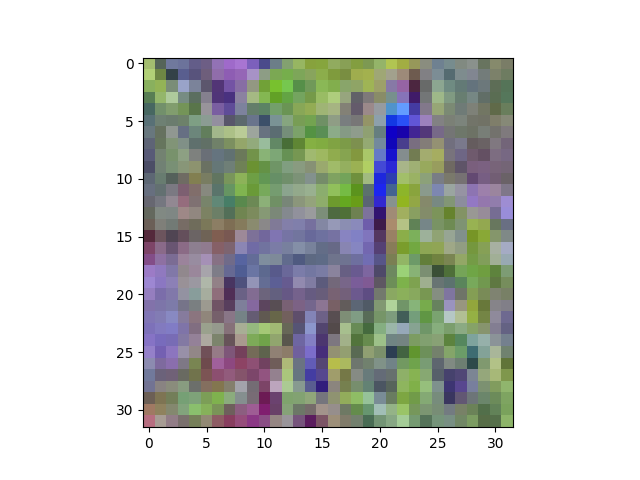 Now the peacock definitely looks different. You can see that the ZCA has rotated the image through colour space, so it looks like a picture on an old TV with the Tone setting out of whack. Still recognisable, though.

Presumably because of the epsilon value I used, the covariance of my transformed data isn't exactly identity, but it's fairly close:

I'm not entirely sure how to sort out the issues you're having; your trouble seems to lie in the shape of your raw data at the moment, so I would advise you to sort that out first before you try to move on to zero-centring and ZCA.

One the one hand, the first plot of the four plots in your update looks good, suggesting that you've loaded up the CIFAR data in the correct way. The second plot is produced by toimage, I think, which will automagically figure out which dimension has the colour data, which is a nice trick. On the other hand, the stuff that comes after that looks weird, so it seems something is going wrong somewhere. I confess I can't quite follow the state of your script, because I suspect you're working interactively (notebook), retrying things when they don't work (more on this in a second), and that you're using code that you haven't shown in your question. In particular, I'm not sure how you're loading the CIFAR data; your screenshot shows output from some print statements (Reading training data..., etc.), and then when you copy train_data into X and print the shape of X, the shape has already been reshaped into (N, 3, 32, 32). Like I say, Update plot 1 would tend to suggest that the reshape has happened correctly. From plots 3 and 4, I think you're getting mixed up about matrix dimensions somewhere, so I'm not sure how you're doing the reshape and transpose.

Note that it's important to be careful with the reshape and transpose, for the following reason. The X = X.reshape(...) and X = X.transpose(...) code is modifying the matrix in place. If you do this multiple times (like by accident in the jupyter notebook), you will shuffle the axes of your matrix over and over, and plotting the data will start to look really weird. This image shows the progression, as we iterate the reshape and transpose operations:

This progression does not cycle back, or at least, it doesn't cycle quickly. Because of periodic regularities in the data (like the 32-pixel row structure of the images), you tend to get banding in these improperly reshape-transposed images. I'm wondering if that's what's going on in the third of your four plots in your update, which looks a lot less random than the images in the original version of your question.

The fourth plot of your update is a colour negative of the peacock. I'm not sure how you're getting that, but I can reproduce your output with: 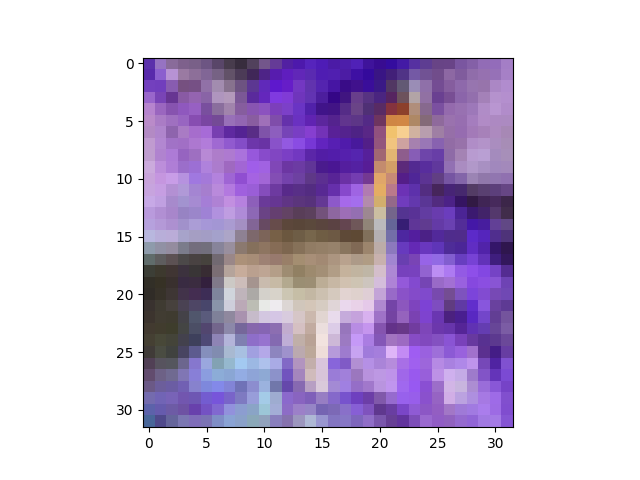 One way you could get this is if you were using my show helper function, and you mixed up m and M, like this:

I had the same issue: the resulting projected values are off:

NOTICE: use this function only for visualization!

However notice how the "decorrelation" or "whitening" matrix is computed @wildwilhelm

This is because the U matrix of eigen vectors of the correlation matrix it's actually this one: SVD(X) = U,S,V but U is the EigenBase of X*X not of X https://en.wikipedia.org/wiki/Singular-value_decomposition 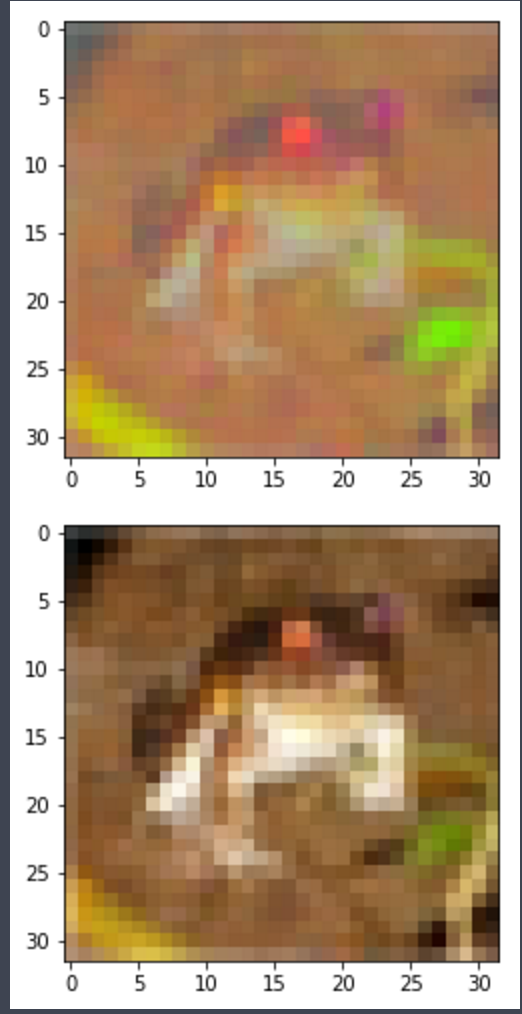 IMAGE EXAMPLE2: NO ZCA transform performances in train and loss

If you want to linearly scale the image to have zero mean and unit norm you can do the same image whitening as Tensofrlow's tf.image.per_image_standardization . After the documentation you need to use the following formula to normalize each image independently:

Keep in mind that the mean and the standard deviation should be computed over all values in the image. This means that we don't need to specify the axis/axes along which they are computed.

The way to implement that without Tensorflow is by using numpy as following:

Not the answer you're looking for? Browse other questions tagged python image-preprocessing image-whitening or ask your own question.

4
Getting negative S value from SVD decomposition in Numpy?

5253
How to execute a program or call a system command from Python
2089
Is there a way to run Python on Android?
1433
What's the canonical way to check for type in Python?
11067
What does the “yield” keyword do?
3212
How to get the current time in Python
2893
How do I concatenate two lists in Python?
1474
Why can't Python parse this JSON data?
3596
Does Python have a string 'contains' substring method?
1166
Correct way to write line to file?