I've got a Jenkins pipeline job; it is configured to build on remote trigger which is being called by a BitBucket webhook. This works and is triggering the build.

I also need to access the payload data sent by BitBucket (described here) to get details about the push such as the specific branch.

The BitBucket plugin would usually parse this payload and present it to the job as an environment variable, but I can't set the pipeline job as being connected to a specific repo for that plugin, so it doesn't help.

I tried testing to see if the data was available in a few different ways like so:

These don't work (nor did I really expect them to).

Is there any way to get hold of this payload data? The only thing I can come up with is having a freestyle job and setting up the connection to BitBucket on that, then calling this job afterwards with the data reformatted. That seems horribly clunky though.

Ultimately I had to settle for a workaround.

my-build-trigger is straightforward. It has a git repo set up in the SCM section and Build when a change is pushed to BitBucket checked in the build triggers section.

In post-build actions I selected Trigger parameterized build on other projects.

The above is important. Build other projects will not trigger a Pipeline job. It will simply say my-build is not buildable.

Pass your payload parameter onto your downstream (Pipeline) job under predefined parameters, entering as payload=${BITBUCKET_PAYLOAD}. 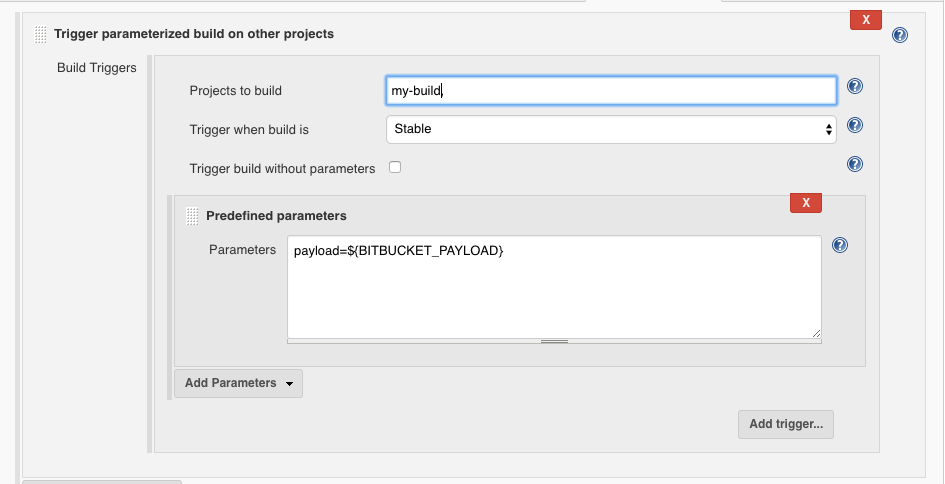 On your pipeline job, you should then create a corresponding parameter called payload (String type).

In your Jenkinsfile you can use this payload like so:

Be warned, you may get a serialization error in your job (java.io.NotSerializableException: groovy.json.internal.LazyMap). That is explained in this question. In short, you need to nullify the payload and other JSONObject vars after use.

Any comments or improvements are always appreciated.

Here is how we solved it:

The latter allows you to receive data in the application/json format, which is what BitBucket sends.

In your job settings, make sure to enable the following options: 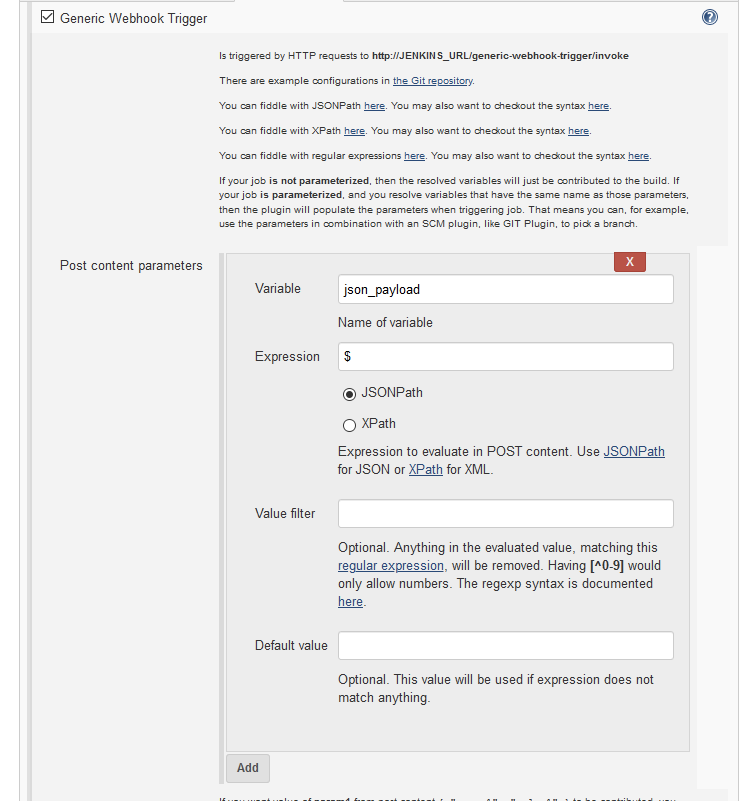 Also, make sure to check both:

This will show in your jenkins console all the variables it receive, also decomposing the json and converting it to plain variables. After you see the variables names that you want, make sure to "register" them as normal variables for your project.

I know you asked about using Jenkins Pipeline and this explanation is using the WebUI. The documentation of generic-webhook-trigger covers code snippets for exactly your case. I decided to add WebUI explanation so you can understand the gist of it.

Not the answer you're looking for? Browse other questions tagged jenkins bitbucket jenkins-plugins jenkins-pipeline or ask your own question.