Why Does my Debugging Proxy Report Google Responses with Garbage Content

I'm using Charles to debug HTTP responses made via a mobile device on my Network (i.e. there's no view source in the iPhone). I've notice that, when I make requests to google.com, Charles reports back a bunch of garbage looking stuff as the content of the response. 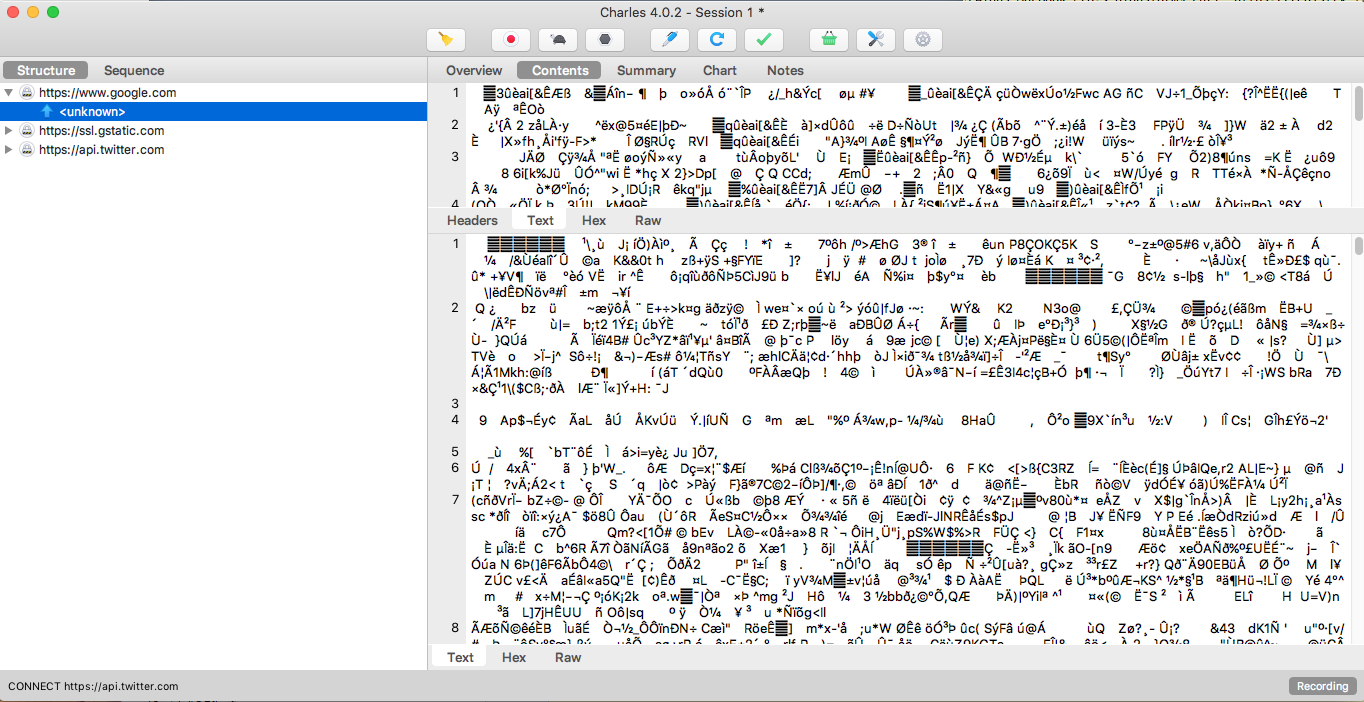 I'm not asking for charler support (or, not asking here -- I've already sent the proxy author a support ticket). I want to know what, exactly, Google's doing here. I don't think this is gzip encoding (at least the headers don't indicate it is), but I don't know if this is some sort of special, non-standard optimzation Google does, or if it's some part of HTTP/2 I'm not familiar with.

So, with the context that I'm a programmer who learned HTTP back in the late 90s -- what exactly is Google sending over the wire these days and/or what would be a good first step to understanding modern HTTP/2?

This is because the request is made over SSL. You are seeing the encrypted traffic. You need to tell CharlesProxy to proxy the requests for Google by going to Proxy -> SSL Proxying Settings and adding the hostname to the list of locations under the SSL Proxying tab. This will allow Charles to MITM you and decrypt the traffic before forwarding it to Google.

At least on MacOS you might need to also trust the Charles root cert. See https://www.charlesproxy.com/documentation/using-charles/ssl-certificates/

Not the answer you're looking for? Browse other questions tagged google-chrome http http2 charles-proxy or ask your own question.

215
What is the difference between HTTP status code 200 (cache) vs status code 304?
41
gzip compression of chunked encoding response?
222
What is the http-header "X-XSS-Protection"?
7
Charles Proxy SSL certificate not accepted by browsers
5
Understanding the value of the header HTTP2-Settings used for http/2 requests and upgrade
154
Google Chrome accessible tree cache issue with UI Automation
3
Keep-Alive http header with timeout not used by google, stackoverflow, etc?
164
What's the net::ERR_HTTP2_PROTOCOL_ERROR about?
1
Charles Proxy certificate is installed on device but calls are blocked Android