How to fix map boundaries on d3 cartographic raster reprojection?

I try to use the raster reprojection of a map following this example. If I change the example kavrayskiy7 projection by the Azimuthal Equidistant projection,

it should project the Earth onto a disc (the image of the projection map). However, the raster reprojection goes beyond that disc and fills the entire canvas with an extended picture (the inverse projection function is not injective, several x/y points on the map correspond to a single lon/lat coordinates). In the original example, this should be avoided with the line

but for this example that does not work. I found other glitches for instance when using the Mollweide projection (two lines appear at the poles) due to the same efect.

To solve this, one way would be to fix the inverse projections so they return error or None when the x/y input is out of range. My attempt was to check if a point is on range using the forward projection of the whole sphere to obtain a SVG path with the boundary of the map, as given by this code:

(see for instance this example). However, I found no easy method to check whether a point [x,y] is inside a SVG closed path.

So my questions are:

Edit: I went through all the 44 projections in this example and I found glitches on the following 25:

I'm using a second answer only because this is a different approach to the same problem. Again, this answer is an alternative approach that tries to avoid a point in polygon solution that uses an svg outline of the projection extent.

This alternative should (I've only tried a handful) work for any projection while my other answer works only for projections projected to a disc. Secondly, this approach doesn't attempt to define the projection area to determine if a pixel should be rendered, but uses d3.projection itself.

As multiple points can return the same value with projection.invert, we can run a forward projection to verify if a pixel should be drawn.

If projection(projection.invert(point)) == point then the point is within the bounds of our projection.

Granted, there may be some precision/rounding errors in this, so some degree of tolerance could be specified.

This check fits within the for loop:

As with the other answer, I built a block out of it here.

I haven't checked this answer for performance, and it seems odd that this sort of check is needed, but it might be a suitable alternative approach to the svg approach proposed in your question.

While I'm pretty sure you are using the projection.inverse function correctly, relying on :

to clip the projection will always fail as projection.inverse appears to always return angles within 180 degrees east/west. While there may be a way to modify the projection itself to return values greater than 180 degrees, it is likely more difficult than other approaches (And honestly, that goes well beyond any answer I can give).

Likewise, using an SVG path to represent the world outline and then using that as the basis to determine if a point should be drawn is probably complicating the matter.

Instead, assuming a circular disc, you can easily compute the radius of the disc and from there determine if a pixel should be drawn:

Using the radius of the disc, we can then compute if a pixel falls on the disc or beyond it in the for loop:

Together, these gave me: 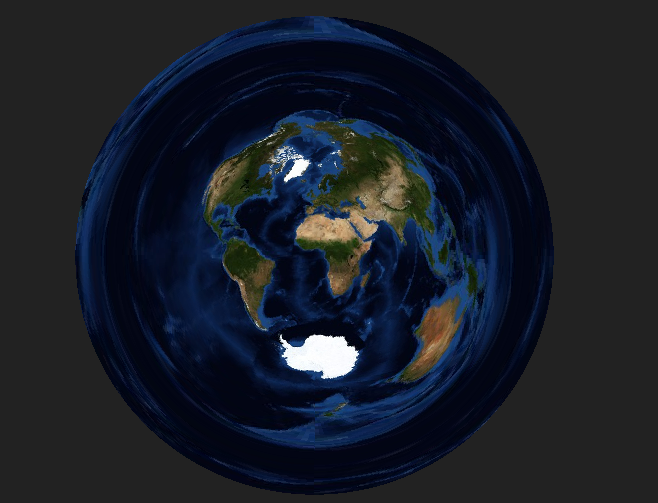 For aesthetic effect, it might be worthwhile trimming the radius down by a certain percent. Of course for different projections this approach may be either difficult or impossible.

I've put the code into a bl.ock here (I moved it to d3 v4 in the process, partly to see if the behavior of projection.inverse is the same).

For the third part of your question, you could try d3's graticule (graticule.outline) function for some info on how d3 gets the boundary profile of a projection.

Not the answer you're looking for? Browse other questions tagged javascript d3.js raster map-projections d3.geo or ask your own question.