Pros and cons of RNGCryptoServiceProvider

According to the responses, here are the pros and cons of using RNGCryptoServiceProvider so far:

A cryptographically strong RNG will be slower --- it takes more computation --- and will be spectrally white, but won't be as well suited to simulations or Monte Carlo methods, both because they do take more time, and because they may not be repeatable, which is nice for testing.

In general, you want to use a cryptographic PRNG when you want a unique number like a UUID, or as a key for encryption, and a deterministic PRNG for speed and in simulation.

System.Random is not thread safe.

Yes, there is only one more. As Charlie Martin wrote System.Random is faster.

The RNGCryptoServiceProvider is the default implementation of a security standards compliant random number generator. If you need a random variable for security purposes, you must use this class, or an equivalent, but don't use System.Random because it is highly predictable.

For all other uses the higher performance of System.Random, and equivalent classes, are welcome.

In addition to the prior answers:

System.Random should NEVER be used in simulations or numerical solvers for science and engineering, where there are material negative consequences of inaccurate simulation results or convergence failure. This is because Microsoftʼs implementation is deeply flawed in several respects, and they cannot (or will not) easily fix it due to compatibility issues. See this post.

I recently encountered this issue very tangibly when working on a Monte Carlo simulation intended to test the effects of different usage patterns for medical devices. The simulation produced results that went mildly in the opposite direction of what would have been reasonably expected.

Sometimes when you canʼt explain something, thereʼs a reason behind it, and that reason could be very onerous!

Hereʼs a plot of the p‑values that were obtained over an increasing number of simulation batches: 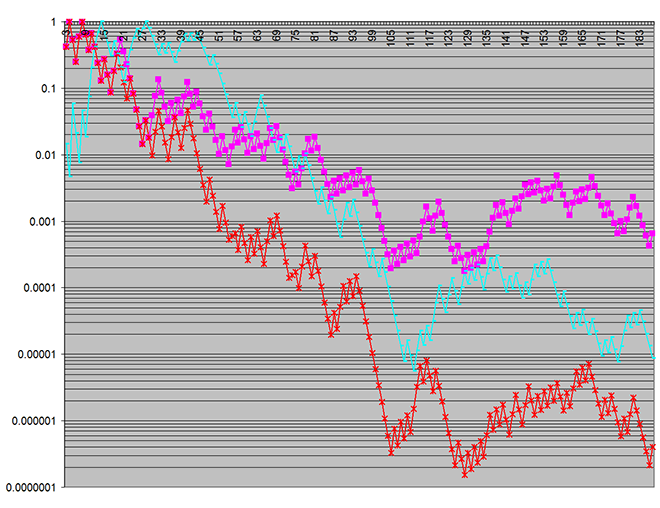 The red and magenta plots show the statistical significance of differences between the two usage models in two output metrics under study.

The cyan plot is a particularly shocking result, because it represents p‑values for a characteristic of the random input to the simulation. (This was being plotted just to confirm the input wasnʼt faulty.) The input was, of course, by design the same between the two usage models under study, so there should not have been any statistically significant difference between the input to the two models. Yet here I was seeing better than 99.97% confidence that there was such a difference!!

Initially I thought there was something wrong in my code, but everything checked out. (In particular I confirmed that threads were not sharing System.Random instances.) When repeated testing found this unexpected result to be highly consistent, I started suspecting System.Random.

I replaced System.Random with a Mersenne Twister implementation — no other changes, — and immediately the output became drastically different, as shown here: 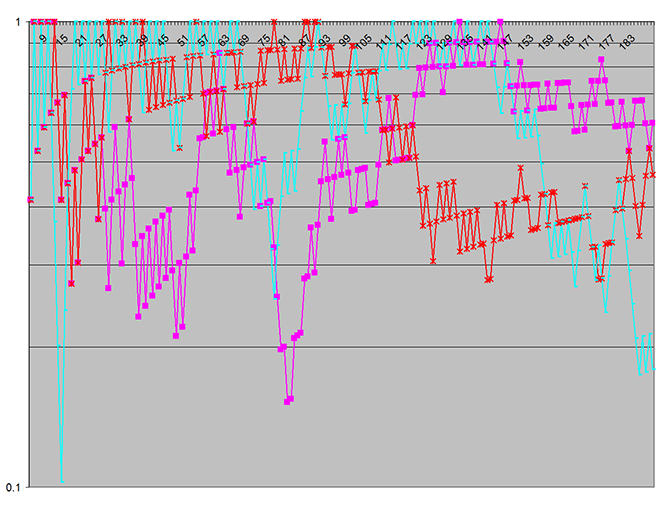 This chart reflects there being no statistically significant difference between the two usage models for the parameters being used in this particular test set. This was an expected result.

Note that in the first chart, the vertical log scale (on the p‑value) covers seven decades, whereas there is only a single decade in the second — demonstrating just how pronounced the statistical significance of the spurious discrepancies was! (The vertical scale indicates the probability the discrepancies could have arisen by chance.)

I suspect what was happening was that System.Random has some correlations over some fairly short generator cycle, and different patterns of internal randomness sampling between the two models under test (which had substantially different numbers of calls to Random.Next) caused these to affect the two models in distinct ways.

It so happens that the simulation input draws from the same RNG streams as the models use for internal decisions, and this apparently caused these sampling discrepancies to impact the input. (This was actually a lucky thing, because otherwise I may not have realized that the unexpected result was a software fault and not some real property of the devices being simulated!)

Not the answer you're looking for? Browse other questions tagged c# .net random or ask your own question.

96
Is C# Random Number Generator thread safe?
32
What is the quality of Random class implementation in .NET?
5
How Can I Generate Random Unqiue Numbers in C#
5
How do I use random numbers in C#?
3
Better random function for C#
2
random number generator to be displayed on a text box
5
What are the implementation details and rationale of ASP.NET MVC3's AntiForgeryToken?
0
Using C# System.Random for a probabilistic algorithm
1
Mono Getting the same sequence using Random

7233
What is the difference between String and string in C#?
1596
What is the difference between const and readonly in C#?
2089
How do I create an Excel (.XLS and .XLSX) file in C# without installing Microsoft Office?
2320
Difference between decimal, float and double in .NET?
804
How to delete all files and folders in a directory?
1633
Random string generation with upper case letters and digits
1731
Generate random integers between 0 and 9
1872
What is a NullReferenceException, and how do I fix it?
1313
How and when to use ‘async’ and ‘await’
1701
AddTransient, AddScoped and AddSingleton Services Differences