I installed Vagrant on Windows 10 so I can create a personal local development environment in a virtual machine. Everything I've read about Vagrant said I can even spin up multiple systems and test communication between them with NAT port forwarding. But first, I just want to get one development environment virtual machine created before I go too far with the rest of it.

I installed VirtualBox, Vagrant, PuTTy, and PuTTYGen, per this SitePoint tutorial: https://www.sitepoint.com/getting-started-vagrant-windows/. Next I created a vagrant project folder on C: drive, did vagrant init, deleted the Vagrantfile, and finally, vagrant init ubuntu/trusty64. Then I did vagrant up, but the process failed with the error:

Vagrant was unable to mount VirtualBox shared folders. This is usually because the filesystem "vboxsf" is not available. This filesystem is made available via the VirtualBox Guest Additions and kernel module. Please verify that these guest additions are properly installed in the guest. This is not a bug in Vagrant and is usually caused by a faulty Vagrant box. For context, the command attempted was:

The error output from the command was:

: No such file or directory

Here's a screenshot of my Windows command line: 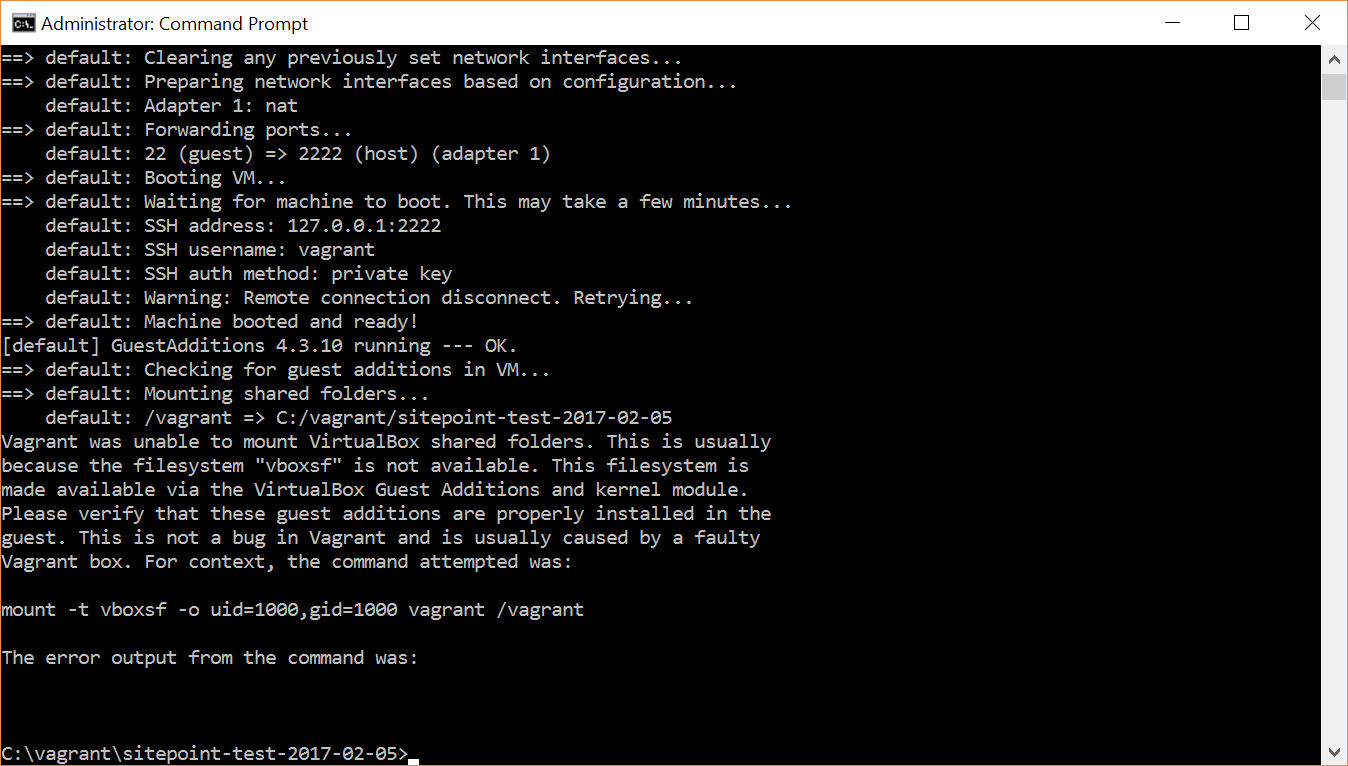 And here's a text version:

What I tried already

This post seemed the most promising in my research.

Unfortunately, none of the solutions offered, nor any of the links provided solved the issue. I've tried a bunch of stuff already, but I'm not a system admin (which, I'm guessing is the skillset that you'd need to troubleshoot this). It was particularly troubling that many of the "solutions" from 2013/2014, are more recently indicated as not working any more. These solutions talk about something to do with symlinks not working, installing plugins like vagrant-vbguest, and something about vbox additions not matching something. I don't really understand all of that, but I tried my best. Here is what I tried already that hasn't solved it yet:

Again, I'm not a system administrator, but I am technically savvy and can follow technical directions.

You can downgrade VirtualBox or edit the line in the file:

on my host machine.

I did this and it worked fine on Windows 10! I would like to add what I did with line 206:

I exprerienced this issue with these stack:

This problem is solved in VirtualBox 5.1.18.

There can be multiple cause :

I had the same issue, and it was just the guest addition that was not up-to-date ...

I finally got around the problem by disabling auto updates for the guest additions:

It's more of a hacky workaround than a solution. I still don't really know what the actual issue is, but I assume it is connected to this: https://www.virtualbox.org/ticket/16670

There is also a regression in Virtualbox 5.1.20

The fix for now is to role back to Virtualbox 5.1.18 where it worked.

It is bug in Vbox. There is an solution to fix.

Login to Vbox guestos: By default password is (vagrant/vagrant)

I have similar issue, check header if it's not match then run below command

it works for me.

The problem with the synced/shared folders not working anymore all of a sudden is, that the VirtualBox Guest additions kernel module is not loaded.

The problem is not directly connected to the VirtualBox version! It may have been the case in the past, but the following explanation covers about 95% of the occurences of this problem.

This is mainly caused by an automatic update of the linux kernel, for example by having cronapt running in the virtual machine.

If the kernel gets a new version, the dkms module for the guest additions can not be restarted after a reboot of the virtual machine. The service file /etc/init.d/virtualbox-guest-utils checks if there is a kernel module in

Let the kernel version at initial setup of the guest additions be: 1.2.3

The updated kernel has the version: 1.2.4

uname -r would result in 1.2.4, while the dkms module was installed with the kernel version 1.2.3. This would cause the virtualbox guest addition service to abort execution and fail with an error message like modprobe xxxx failed.....

What we need to do is, install the headers of the kernel alongside with the new kernel version, so that the dkms module for the virtualbox guest additions can be automatically rebuilt with them.

Fortunately there is a meta package, that lets us have the newest version of the kernel headers installed.

It seems to be named differently in different linux flavours. Here is a small list of them.

Not the answer you're looking for? Browse other questions tagged windows vagrant virtualbox shared-directory vagrant-windows or ask your own question.