For this, I'm using SSLSocketFactory's createSocket() function that allows to pass an existing Socket over which to run the SSL connection like this:

This code is working fine when the underlying socket is a normal tcp Socket, but when I use as underlying socket an SSLSocket that has been created using the above code before, the handshake fails with the following exception:

Any help is greatly appreciated!

Update: The very same code works in JRE 1.8 on a Mac, but not on Android.

Update 2: Conceptually, these are the steps the connection goes through:

Update 3: I have now opened a GitHub repo with a sample project and tcpdumps: https://github.com/FD-/SSLviaSSL

Note: I have found and read a question with very similar title, but it did not contain much useful help unfortunately.

I don't think you're doing anything wrong. It looks like there's a bug in the protocol negotiation during your second handshake. A good candidate would be failing in an NPN TLS handshake extension.

Take a look at your protocols in this call: sslSocket.setEnabledProtocols(sslSocket.getSupportedProtocols());

You can walk through the listed protocols and try them individually. See if you can lock down what's failing and whether you need that specific protocol or extension supported.

So I tried to find out what goes wrong in case of android but so far I didn't find anything wrong with your code. Also since the code works for JRE, it asserts the hypothesis.

From the tcpdump you provided, there is substantial information to conclude how Android behaves with the same set of APIs as JRE.

Let's have a look at JRE tcpdump: 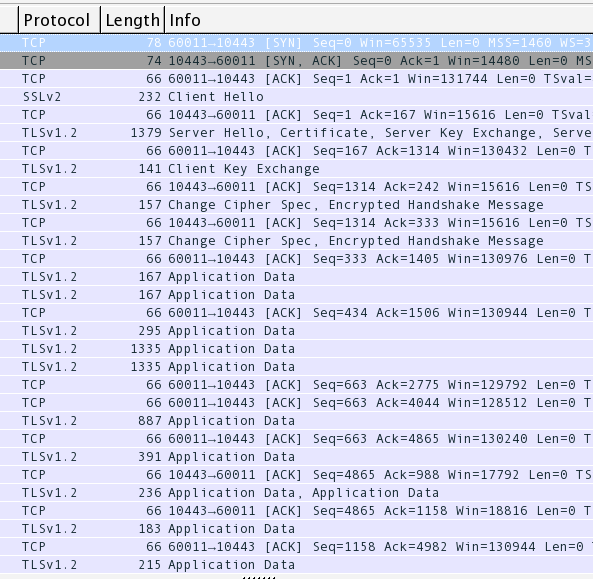 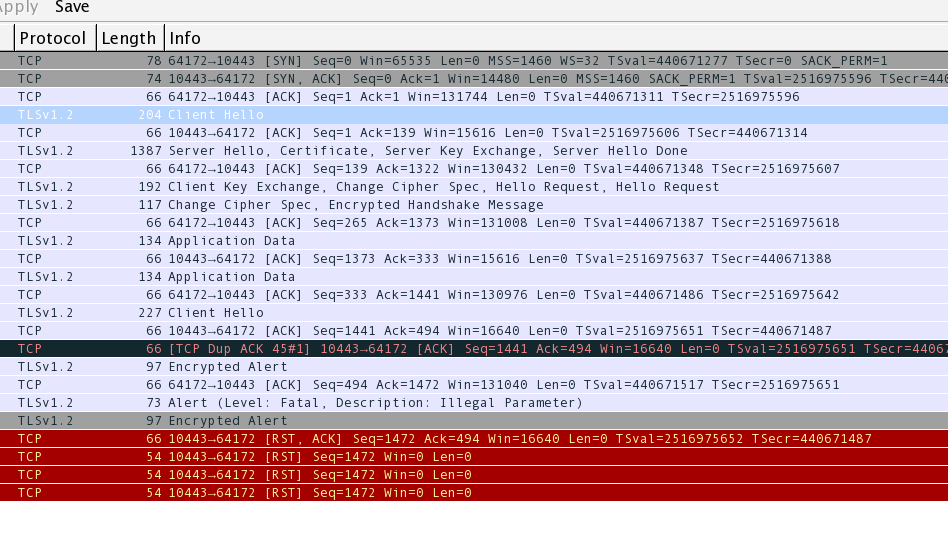 In case of JRE, the client does the initial SSL handshake with the stunnel/proxy server. The same can be seen below: 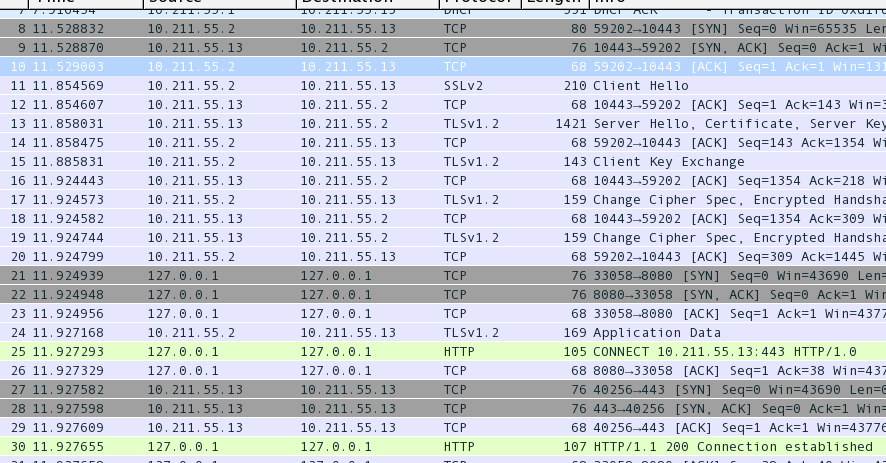 The handshake is successful and connection is done

Then the client tries to connect to remote server (www.google.com) and starts the handshake. So the client hello sent by client is seen as encrypted message in packet #34 and when stunnel decrypts the same, it is seen at "Client hello" which is forwarded to proxy server by stunnel

Initial SSL handshake from client to stunnel/proxy is successful as seen above.

Then when android client starts the handshake with remote (www.google.com), ideally it should use SSL socket for the same. If this was the case, we should see encrypted traffic from android to stunnel (similar to packet #34 from JRE case), stunnel should decrypt and send "client hello" to proxy. however as you can see below, android client is sending a "client hello" over plain socket.

If you compare the packet #24 with packet #34 from JRE, we can spot this difference.

This is a bug with android SSL (factory.createsocket() with SSL socket) implementation and I feel there may not be a magical workaround for the same using the same set of APIs. In fact I found this issue in android bug list. See below link: https://code.google.com/p/android/issues/detail?id=204159

This issue is still unresolved and you can probably follow-up with android dev team to fix the same.

If we conclude that the same set of APIs cannot work then you are left with only one option:

Since HTTPS make sure no middle man interrupt the communication between the two. thats why you are unable to do so. so tha second handshake fails.

I don't know if this helps but:
I've built your repo test environment, and my error is slightly different:

One thought on threads: what thread are you running your doSSLHandshake() method on ?

This indeed turned out to be a bug in the default SSL providers on any Android device I tested (my newest device is a Nexus 9 running Android 7.1.1 though). Eventually, I found that the engine-based SSLSocket implementation (freshly released at the time) of the standalone version of the Conscrypt SSL provider worked on Android in exactly the way I expected it to work.

For further details, have a look at the discussion with Conscrypt maintainers on GitHub: https://github.com/google/conscrypt/issues/104

Not the answer you're looking for? Browse other questions tagged java android ssl cryptography sslsocketfactory or ask your own question.

121
Javax.net.ssl.SSLHandshakeException: javax.net.ssl.SSLProtocolException: SSL handshake aborted: Failure in SSL library, usually a protocol error
131
HTTPS connections over proxy servers
15
How to use HttpsURLConnection through proxy by setProperty?
1
SSLSocket over another SSLSocket

2558
How do I call one constructor from another in Java?
402
SSL certificate rejected trying to access GitHub over HTTPS behind firewall
10
TLS connection using SSLSocket is slow in Android OS
1
SSLSocket over another SSLSocket
1
Clients (Browser) goes timeout while connecting to a SSLSocket with CA certified certificate
15
How to connect a SSL socket through a HTTP proxy?
2
Getting the trusted X509Certificate for a Java SSLSocket
2
javax.net.ssl.SSLProtocolException: SSL handshake aborted: ssl=0x7fa2258640: Failure in SSL library, usually a protocol error