Initially, I built the middleware directly into an ASP.NET Core app and installed my proprietary dependencies with Nuget. This worked just fine.

When I try to run the middleware, I get the following: Could not load file or assembly 'System.Net.Http, Version=4.1.1.0, Culture=neutral, PublicKeyToken=b03f5f7f11d50a3a' or one of its dependencies. The system cannot find the file specified.

The ASP.NET Core app seems to use System.Net.Http 4.0.0

I disabled automatic package restoration, I cleared the Nuget cache, and tried again. No luck. The package thinks it's successfully installed, but it never really works.

Here's the relevant section of the ASP.NET Core app's project.json:

It occurred to me that I may have set up the class library incorrectly. So I went to https://github.com/aspnet/Security and copied the project structure of their middleware. I again installed my dependencies (a much smaller list!), and it built successfully. I again built a Nuget package and installed it to the ASP.NET Core app. But again, I got the same error about Version 4.1.1.0.

Here is the project.json of the new class library:

Nothing references System.Net.Http at all! 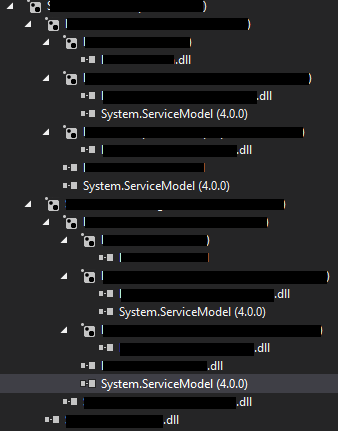 I can't figure out where System.Net.Http 4.1.1.0 is referenced, and I can't make ASP.NET Core update to use anything newer than 4.0.0.0. But if I paste my code and download the dependencies directly in the ASP.NET Core app, everything works fine.

It looks like the problem is the Microsoft.AspNetCore.Authentication Nuget package. Every time it is installed, it nukes the new version of System.Net.Http. Any ideas on how to prevent that?

Alright, I figured it out. It's the package Microsoft.AspNetCore.Authentication that is the problem.

After narrowing it down, it looks like Microsoft is aware of the problem: https://github.com/aspnet/Security/issues/1046. They'll be releasing a fix within a month, it sounds like.

Not the answer you're looking for? Browse other questions tagged asp.net dll asp.net-core nuget-package asp.net-core-middleware or ask your own question.