I have looked at the other posts and have made certain that the path is correct to the executable file, as shown below. I can launch git from from this path outside of Android Studio. The current project is the "sunshine-version 2" from Udacity and it is a version or two old, but this should not affect the VCS from launching. I have read the other posts concerning this issue, but none have resolved this issue.

Also, when Android Studio gradle runs, it will open git in several windows and then close them almost immediately. They pop-up for a second or two, and then close. It's definitely trying to run git, and then default closes?

I just went to the Git path ubication, the only different thing that I did was have stopped at the cmd folder. As you might see in the next screenshot 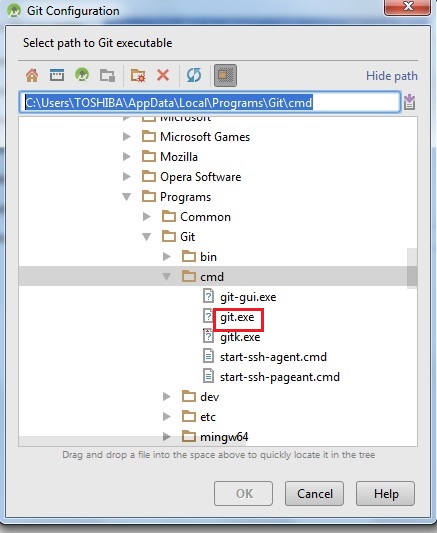 Subsequently, instead of choosing git-gui.exe option, I select just git.exe option. And it seems to work for me. 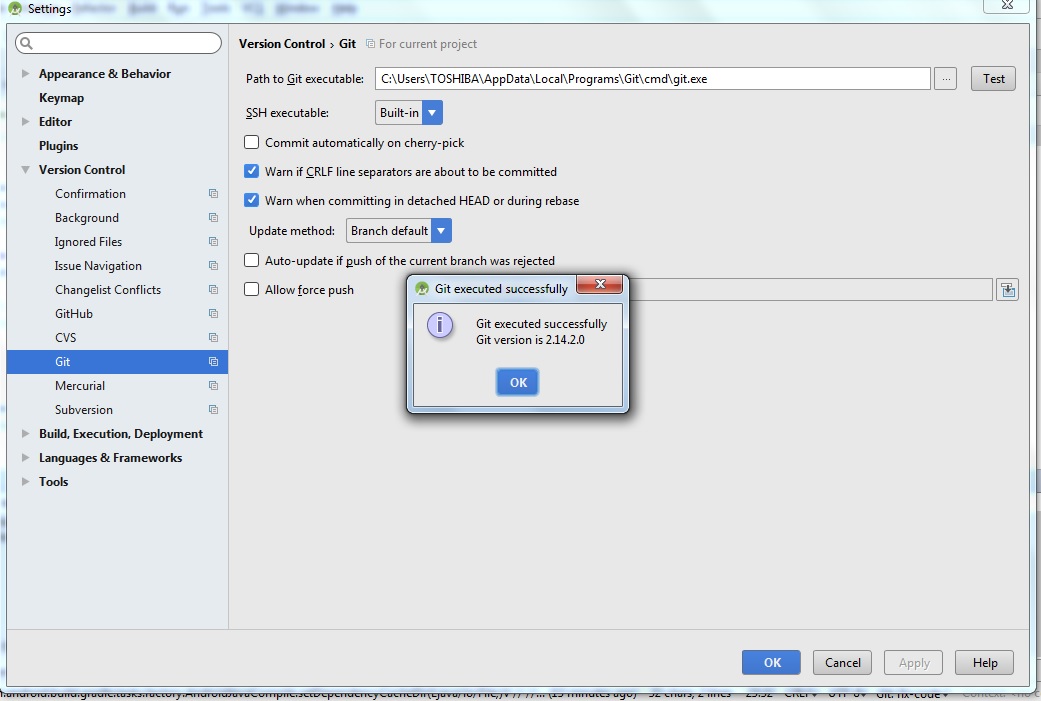 you should try this path.

in windows 10, 64bit version your installed git location is C:\Program Files\Git, There is a bin folder inside Git folder and there is a git.exe file, this is the file you have to choose or add in android studio.Works for me.

The path you configure for git should be C:\Users\Computer\Documents\Development\Git\cmd\git.exe instead. You should use git.exe not git-base.exe.

As mentioned by Marina-MSFT, you should add git.exe instead of git-base.exe or any other .exe files. You could find git.exe under, in your case, C:\Users\Computer\Documents\Development\Git\bin\git.exe, normally the git.exe file is under bin file of Git you have installed

You should give a path in git.exe in cmd folder

This is the path where GitHub is located in its default installation. Remove the text including "<>" characters in below path and enter your relevant values.

For x64-bit Windows version change the path directory to

you should go into the "cmd" folder which is created in the main folder that you've installed the Git program. (usually is C:\Program Files\Git). In this folder you can find Git.exe then copy this address in configuration windows in Android Studio.

Not the answer you're looking for? Browse other questions tagged android git version-control android-studio-2.2 or ask your own question.

854
Git for beginners: The definitive practical guide
1727
How can I view an old version of a file with Git?
1621
How can I selectively merge or pick changes from another branch in Git?
1843
How does Git handle symbolic links?
2181
Make .gitignore ignore everything except a few files
2722
Git fetch remote branch
850
How to upgrade Git on Windows to the latest version
749
"cannot resolve symbol R" in Android Studio
2804
Git is not working after macOS Update (xcrun: error: invalid active developer path (/Library/Developer/CommandLineTools)