Can Windows containers be hosted on Linux?

Is it possible to run Windows containers on Linux? The scenario is based on an application written in .NET (old net) and the Linux user that wants to run this with Docker needs to provide a net462 written API on the localhost.

I am using the beta version of Docker Desktop for Windows.

If no, then why can Windows run Linux containers and not vice-versa?

As some time has passed and this question is a popular one, I'd like to add one note here that the workaround is to use the new .NET Standard. It allowed me to pack the 4.6.2 framework into a new library.

Q: But what about Docker for Windows? Or other VM-based solutions?

Q: So, what should I do with a .NET Framework 462 application, if I would like to run in a container?

A: It depends. Consider the following recommendations:

Bonus: Not directly related to the question, but you can now run not only the Linux container itself, but also an orchestrator like Kubernetes: Kubernetes is Now Available In Docker Desktop Stable Channel

The setup for running Linux containers with LCOW is a lot simpler than the previous architecture where a Hyper-V Linux VM runs a Linux Docker daemon, along with all your containers. With LCOW, the Docker daemon runs as a Windows process (same as when running Docker Windows containers), and every time you start a Linux container Docker launches a minimal Hyper-V hypervisor running a VM with a Linux kernel, runc and the container processes running on top.

Because there’s only one Docker daemon, and because that daemon now runs on Windows, it will soon be possible to run Windows and Linux Docker containers side-by-side, in the same networking namespace. This will unlock a lot of exciting development and production scenarios for Docker users on Windows.

As mentioned in comments by @PanagiotisKanavos, containers are not for virtualization, and they are using the resources of the host machine. As a result, for now a Windows container cannot run "as-is" on a Linux machine.

But - you can do it by using VM - as it works on Windows. You can install a Windows VM on your Linux host, which will allow to run Windows containers.

With it, IMHO running it this way in a production environment will not be the best idea.

No, you cannot run Windows containers directly on Linux.

But you can run Linux on Windows.

Windows Server 2016 comes packaged with a base image of the Ubuntu OS (after the September 2016 beta service pack). That is the reason you can run Linux on Windows and not otherwise. Check out here. Finally, Linux Containers Could Run on Windows with Docker’s LinuxKit

You can change between OS containers Linux and Windows by right clicking on the Docker in the tray menu. 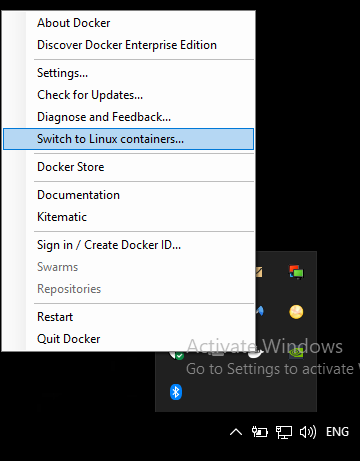 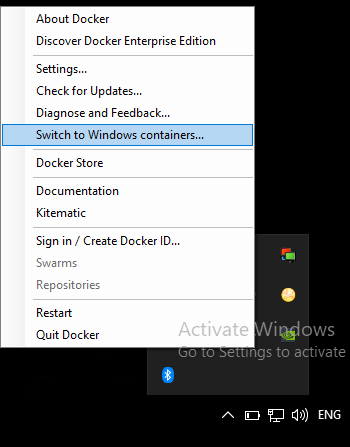 While Docker for Windows is perfectly able to run Linux containers, the converse, while theoretically possible, is not implemented due to practical reasons.

The most obvious one is, while Docker for Windows can run a Linux VM freely, Docker for Linux would require a Windows license in order to run it inside a VM.

Also, Linux is completely customizable, so the Linux VM used by Docker for Windows has been stripped down to just a few MB, containing only the bare minimum needed to run the containers, while the smallest Windows distribution available is about 1.5 GB. It may not be an impracticable size, but it is much more cumbersome than the Linux on Windows counterpart.

While it is certainly possible for someone to sell a Docker for Linux variation bundled with a Windows license and ready to run Windows containers under Linux (and I don't know if such product exists), the bottom line is that you can't avoid paying Windows vendor lock-in price: both in money and storage space.

However there are workarounds utilizing VMstyle solutions.

I have found this solution which uses Vagrant and Packer on Mac, so it should work for Linux as well: https://github.com/StefanScherer/windows-docker-machine

As Muhammad Sahputra suggested in this post, it is possible to run Windows OS inside VirtualBox (using VBoxHeadless - without graphical interface) inside a Docker container.

Also, a NAT setup inside the VM network configurations can do a port forwarding which gives you the ability to pass-through any traffic that comes to and from the Docker container. This eventually, in a wide perspective, allows you to run any Windows-based service on top of Linux machine.

Maybe this is not a typical use case of a Docker container, but it definitely is an interesting approach to the problem.

For simple applications and maybe more complicated, you can try to use wine inside a docker container.

This Docker Hub page may help you to achieve your goal.

I hope that Docker will release a native solution soon, like they did with docker-machine on Windows several years ago.

Unlike virtualization, containerization uses the same host OS. So the container built on Linux can not be run on Windows and vice versa.

In Windows, you have to take help of virtualization (using Hyper-V) to have same OS as your container's OS and then you should be able to run the same.

Docker for Windows is a similar application which is built on Hyper-V and helps in running Linux Docker containers on Windows. But as far as I know, there is nothing as such which helps run Windows containers on Linux.

You can use Windows Containers inside a virtual machine (the guest OS should match the requirements - Windows 10 Pro or Windows Server 2016).

For example, you can use VirtualBox. Just enable Hyper-V inside System → Acceleration → Paravirtualization Interface.

After that, if Docker doesn't start up because of an error, use the "Switch to Windows containers..." in the settings.

If any Linux distribution has this kind of setup, we can run Windows containers. Docker for Linux supports only Linux containers.

You can run SQL Server and .NET Core on Linux, and hence inside Linux containers, nowadays.

The direct answer to your question, is of course, unless there is a version compiled especially for Linux, no.

Not the answer you're looking for? Browse other questions tagged linux docker docker-for-windows windows-container docker-desktop or ask your own question.

3
Is Docker Platform Independent?
-2
Is there is a way to dockerize a .NET framework application on linux?
4170
How is Docker different from a virtual machine?
39
Linux machine with docker deploy windows container
16
Why is the Ubuntu docker image not a VM
7
Can a linux app run on windows using Docker?
8
How to run Docker on Windows on VirtualBox on Linux?
4
Is there any way to run an image Windows Docker on Ubuntu?
1
.Net Core 2.2 Validation of jwt failing with 401 on a container
2
In Docker Desktop for windows 10 with WSL2, where does docker containers live & how Linux containers can run a java app, but not windows nanoserver?
See more linked questions

1718
How do I prompt for Yes/No/Cancel input in a Linux shell script?
2050
How can I profile C++ code running on Linux?
2570
How can I recursively find all files in current and subfolders based on wildcard matching?
2379
How to change the output color of echo in Linux
1317
How can I use grep to show just filenames on Linux?
965
How to list containers in Docker
6694
How do I find all files containing specific text on Linux?
1386
How to remove old Docker containers
29
Docker: Why use Linux containers on Windows?