Trying to write a regular expression to match GS1 barcode patterns ( https://en.wikipedia.org/wiki/GS1-128 ), that contain 2 or more of these patterns that have an identifier followed by a certain number of characters of data.

I need something that matches this barcode because it contains 2 of the identifier and data patterns:

but should match not this barcode when there is only one pattern in:

For some strange reason as soon as I remove the {2,} it works, but I need the {2,} so that it only returns matches if there is more than one match.

How do I make this work so it will only match and pull the data if there is more than 1 set of match groups?

Your RegEx is logically and syntatically correct for Perl-Compatible Regular Expressions (PCRE). The issue I believe you are facing is the fact that JavaScript has issues with repeated capture groups. This is why the RegEx works fine once you take out the {2,}. By adding the quantifier, JavaScript will be sure to return only the last match.

What I would recommend is removing the {2,} quantifier and then programmatically checking for matches. I know it's not ideal for those who are big fans of RegEx, but c'est la vie.

Please see the snippet below:

The reason is that the capture groups only give the last match by that particular group. Imagine that you would have two barcodes in your sequence that have both the same identifier 01... now it becomes clear that $1 cannot refer to both at the same time. The capture group only retains the second occurrence.

A straightforward way, but not so elegant, is to drop the {2,}, and instead repeat the whole regular expression pattern for matching the second barcode sequence. I think you also need to use the ^ (start of string anchor) to be sure the match is at the start of the string, otherwise you might pick up an identifier halfway an invalid sequence. After the repeated regular expression pattern you should also add .* if you want to ignore anything that follows after the second sequence, and not have it come back to you when using replace.

Finally, as you don't know which identifier will be found for the first and second match, you need to reproduce $1$2$3$4 in your replace, knowing that only one of those four will be a non-empty string. Same for the second match: $5$6$7$8.

Here is the improved code applied to your example string:

If you need to also match the barcodes that follow the second, then you cannot escape from writing a loop. You cannot do that with just a regular expression based replace.

If a loop is allowed, then you can use the regex#exec method. I would then suggest to add in your regular expression a kind of "catch all", which will match one character if none of the other identifiers match. If in the loop you detect such a "catch all" match, you exit:

sth in here is mixing faulty

I add the picture to show what I mean. 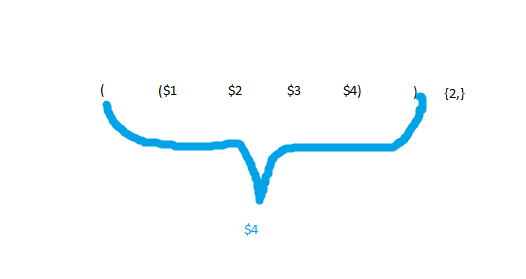 By adding the quantifier, JavaScript will be sure to return only the last match.

Not the answer you're looking for? Browse other questions tagged javascript regex or ask your own question.