Tool to track #include dependencies [closed]

Any good suggestions? Input will be the name of a header file and output should be a list (preferably a tree) of all files including it directly or indirectly.

If you have access to GCC/G++, then the -M option will output the dependency list. It doesn't do any of the extra stuff that the other tools do, but since it is coming from the compiler, there is no chance that it will pick up files from the "wrong" place.

Thanks to KeithB. I looked up the docs for cl.exe (VS2008) and found the /showIncludes flag. From the IDE, this can be set from the property page of any CPP file. 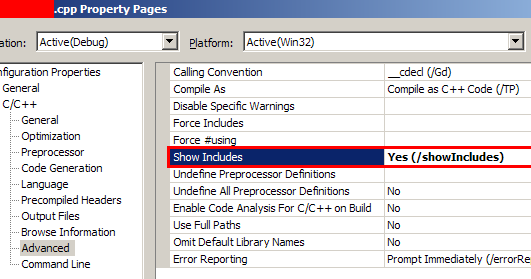 For a heavy weight solution, you should check out doxygen. It scans through your code base and comes up with a website, effectively, that documents your code. One of the many things it shows is include trees.

If you were looking to be able to plug the output of this tool into some other process, then this may not work for you (although doxygen does output to other formats, I'm not real familiar with that feature). If you simply want to eyeball the dependencies, though, it should work great.

I've played around with a tool called cinclude2dot. It was pretty useful in getting a handle on a rather large codebase when I came to work here. I've actually thought about integrating it into our daily build eventually.

First, cinclude2dot.pl is a perl script which analyses C/C++ code and produces a #include dependency graph as a dot file for input into graphviz.

If you don't want to go the way of that sort of manual tool, then the hands-down by far winner is in my opinion a tool known as "IncludeManager" from ProFactor.

There's a free trial, and it is awesome. It's a plug-in for Visual Studio that's totally integrated so double clicking on something over here takes you to the place where it is included over there.

Tooltip mouseovers give you all the info you would want, and it lets you drill down / up, remove whole subtrees you don't care about, view representations other than graphs, cycle through a list of matches for this and that, it's wonderful.

If you're quick about it, you can refactor the #include structure of a large projects before the trial runs out. Even so, it doesn't cost much, about $35 per license.

For what it does, it is just about perfect. Not only #include graphs but also cross project dependencies of shared files, impact on build times, detailed properties in grids, perfect.

Good news: redhat Source-Navigator (runs on Windows too). Of course, compiler switches (mentioned earlier) have superior parsing and I'm not sure how this will handle MFC, Qt and their magic keywords.

Building on KeithB's answer, here is GNUmake syntax to automatically 1) generate the dependency files, 2) keep them up to date, and 3) use them in your makefile:

(Make sure to change those indents to hardtabs.)

You can also check out makedepend:

Understand for C++ should be able to help you: it builds a database that you can access from Perl.

cscope (http://cscope.sourceforge.net/) does this in a standalone xterm, and also can be used inside your favorite editor - it has great emacs and vi/vim support.

Not the answer you're looking for? Browse other questions tagged c++ c header or ask your own question.

180
Displaying the #include hierarchy for a C++ file in Visual Studio
100
How should I detect unnecessary #include files in a large C++ project?
44
How can I see the C/C++ #include graph easily?
26
Header file inclusion static analysis tools?
11
How to find header dependencies for large scale projects on linux
18
What does Boost mean by "header-only libraries" and "automatic linking"?
10
list of all header files included by a C file
7
What files are actually included when compiling
4
'make' does not recompile when source file has been edited
6
Tool to Map #include's
See more linked questions

2772
What is the difference between #include <filename> and #include "filename"?
588
Why does C++ compilation take so long?
3181
Improve INSERT-per-second performance of SQLite
329
C/C++ include header file order
362
Combining C++ and C - how does #ifdef __cplusplus work?
116
Where to put include statements, header or source?
1138
In Node.js, how do I "include" functions from my other files?
2060
Why is reading lines from stdin much slower in C++ than Python?
1794
Image Processing: Algorithm Improvement for 'Coca-Cola Can' Recognition