How to analyse z3 performance issues?

I have 37 similar SMT2 problems, each in two equisatisfiable versions that I call compact and unrolled. The problems are using incremental SMT solving and every (check-sat) returns unsat. The compact versions are using the QF_AUFBV logic, the unrolled versions use QF_ABV. I did run them in z3, yices, and boolector (but boolector only supports the unrolled version). The results of this performance evaluation can be found here:

The SMT2 files for this examples can be downloaded from here (~10 MB):

There is a wide spread between solvers. Boolector and Yices are consistently faster than z3, in some cases up to two orders of magnitude.

However, my question is about "z3 vs z3" performance. Consider for example the following data points:

The problems insn_add and insn_sub are almost identical. Both are generated from Verilog using Yosys and the only difference is that insn_add is using this Verilog module and insn_sub is using this one in its place. Here is the diff between those two source files:

Here are the times before creating the median. The :random-seed setting obviously does not seem to make much of a difference:

Since the value of :random-seed does not seem to have much of an effect, I would assume there is something intrinsic to those .smt2 files that makes them fast or slow on z3. How would I investigate this? How would I find out what makes the fast cases fast and the slow cases slow, so I can avoid whatever makes the slow cases slow? (Yes, I know that this is a very broad question. Sorry. :)

Here are some more concrete questions along the lines of my primary question. This questions are directly inspired by the obvious differences I can see between the (compact) insn_add and insn_sub benchmarks.

Making small changes to the .smt2 files without changing the semantics can be very difficult for large test cases generated by complex tools. I'm hoping there are other things I can try first, or maybe there is some existing expert knowledge about the kind of changes that might be worth investigating. Or alternatively: What kind of changes would effectively be equivalent to changing :random-seed and thus are not worth investigating.

I have now three test cases (test1.smt2, test2.smt2, and test3.smt2) that are identical except that I've renamed some of the functions I declare/define. The test cases can be found at http://svn.clifford.at/handicraft/2017/z3perf/.

This is a variation of the original problem that takes ~2 minutes to solve instead of ~1 hour. As before, changing the value of :random-seed only has a marginal effect. But renaming some of the functions without changing anything else changes the runtime by more than 2x: 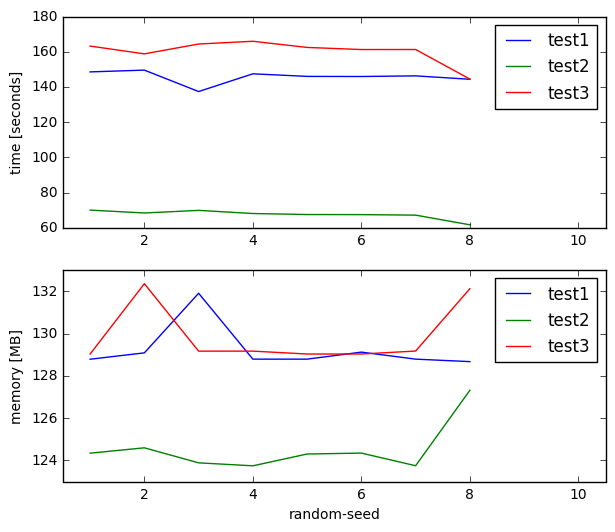 I've now opened an issue on github, arguing that :random-seed should by tied into whatever thing I change randomly inside z3 when I rename the functions in my SMT2 code.

As you say, there can be many things that may be creating that perf difference in add vs sub. A good start is to check if the formulas after preprocessing are equal modulo add/sub (btw, Z3 converts 'a - b' into 'a + (-1) * b'). If not, then trace down which preprocessing step is at fault. Then trace down the problem and send us a patch :)

Alternatively, the problem could be down the line, e.g., in the bitblaster. You can also dump the bit-blasted formulas of both of your files and check if there is a significant difference in terms of number of variables and/or clauses.

Anyway, you'll need to be prepared to invest a day or two (maybe more) to track down these issues. If you find something, let us know and/or send us a patch! :)

Not the answer you're looking for? Browse other questions tagged z3 smt or ask your own question.