I created two docker containers based on two different images. One of db and another for webserver. Both containers are running on my mac osx.

However, how do I access db connection from webserver?

The way I started db container is

I started wls container as

I can access db on host by connecting to

It's easy. If you have two or more running container, complete next steps:

Now you connect from web1 to web2 container or the other way round.

Use the internal network IP addresses which you can find by running:

Note that only internal IP addresses and ports are accessible to the containers connected by the network bridge.

Easiest way is to use --link, however the newer versions of docker are moving away from that and in fact that switch will be removed soon.

The link below offers a nice how too, on connecting two containers. You can skip the attach portion, since that is just a useful how to on adding items to images.

The part you are interested in is the communication between two containers. The easiest way, is to refer to the DB container by name from the webserver container.

you named the db container db1 and the webserver container web0. The containers should both be on the bridge network, which means the web container should be able to connect to the DB container by referring to its name.

So if you have a web config file for your app, then for DB host you will use the name db1.

if you are using an older version of docker, then you should use --link.

then when you start the web app. use:

and the web app will be linked to the DB. However, as I said the --link switch will be removed soon.

I'd use docker compose instead, which will build a network for you. However; you will need to download docker compose for your system. https://docs.docker.com/compose/install/#prerequisites

this will name the network a generic name, I can't remember off the top of my head what that name is, unless you use the --name switch.

NOTE: if you use the --name switch, you will need to use it when ever calling docker compose, so docker-compose --name setup1 down this is so you can have more then one instance of webserver and db, and in this case, so docker compose knows what instance you want to run commands against; and also so you can have more then one running at once. Great for CI/CD, if you are running test in parallel on the same server.

best part is, if you want to change db's or something like that for unit test you can include an additional .yml file to the up command and it will overwrite any items with similar names, I think of it as a key=>value replacement.

This will overwrite the db. with a different setup. When needing to connect to these services from each container, you use the name set under service, in this case, webserver and db.

I think this might actually be a more useful setup in your case. Since you can set all the variables you need in the yml files and just run the command for docker compose when you need them started. So a more start it and forget it setup.

NOTE: I did not use the --port command, since exposing the ports is not needed for container->container communication. It is needed only if you want the host to connect to the container, or application from outside of the host. If you expose the port, then the port is open to all communication that the host allows. So exposing web on port 80 is the same as starting a webserver on the physical host and will allow outside connections, if the host allows it. Also, if you are wanting to run more then one web app at once, for whatever reason, then exposing port 80 will prevent you from running additional webapps if you try exposing on that port as well. So, for CI/CD it is best to not expose ports at all, and if using docker compose with the --name switch, all containers will be on their own network so they wont collide. So you will pretty much have a container of containers.

UPDATE: After using features further and seeing how others have done it for CICD programs like Jenkins. Network is also a viable solution.

The above command will create a "test_network" which you can attach other containers too. Which is made easy with the --network switch operator.

For a detailed example of using network in a cicd pipeline, you can refer to this link: https://git.in.moodle.com/integration/nightlyscripts/blob/master/runner/master/run.sh

Which is the script that is ran in Jenkins for a huge integration tests for Moodle, but the idea/example can be used anywhere. I hope this helps others.

Using docker-compose, services are exposed to each other by name by default. Docs.
You could also specify an alias like;

And then access the service using the specified alias as a host name, e.g mongo.openconceptlab.org for mongo in this case.

Use hostname host.docker.internal to access services running on your host machine from inside a container.

I run PostgreSQL in one container and my app in a separate container. I configure the app database connection to use host.docker.internal as the hostname and it just works.

After adding a server in pgadmin hostname as localhost.It will show a connection error. Because Docker container pgadmin getting localhost as their system instead we need PostgreSQL IP to solve the problem. 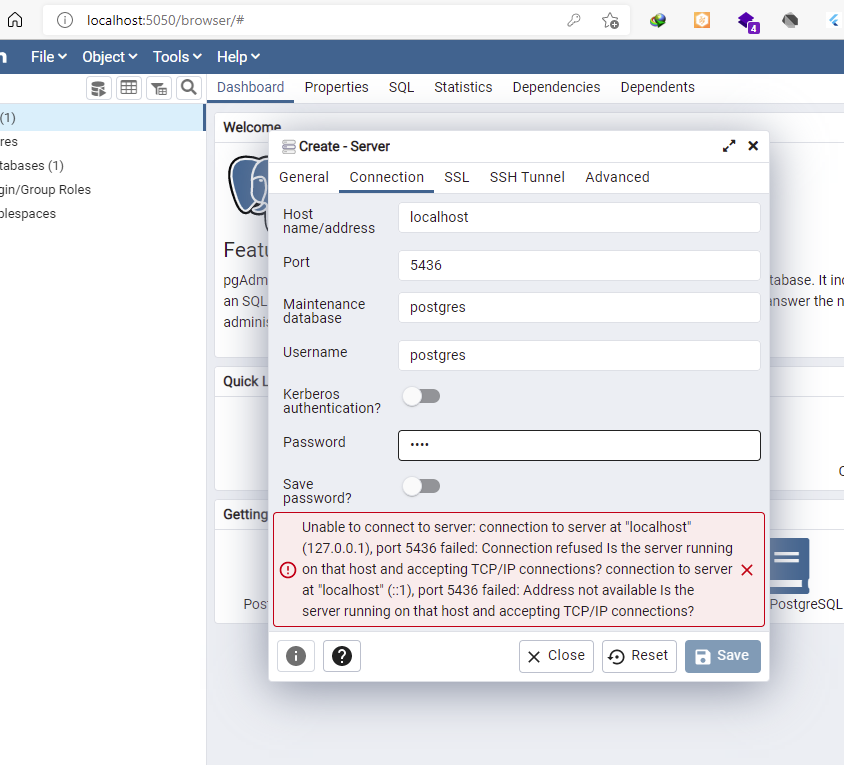 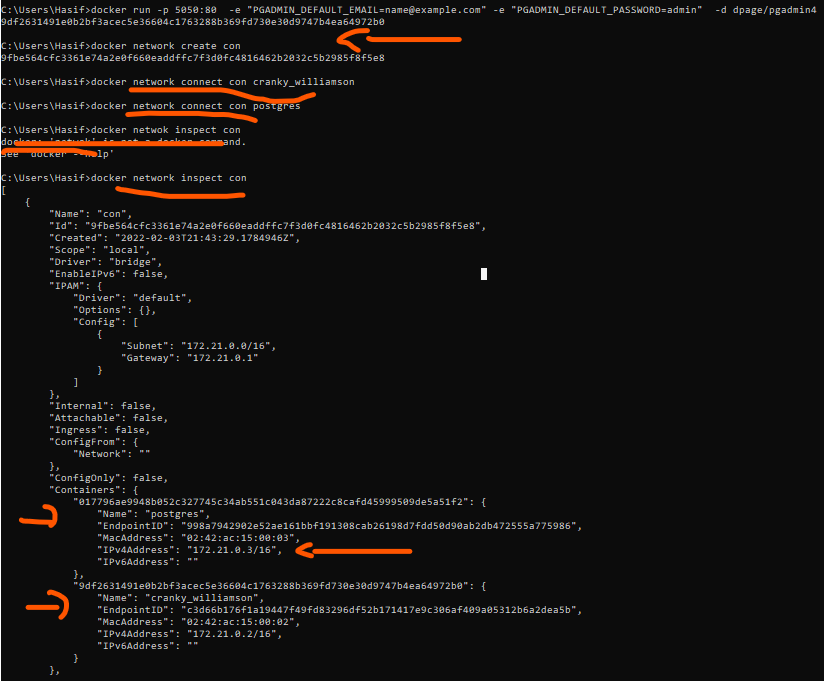 This command gets connected container IP address and other details. 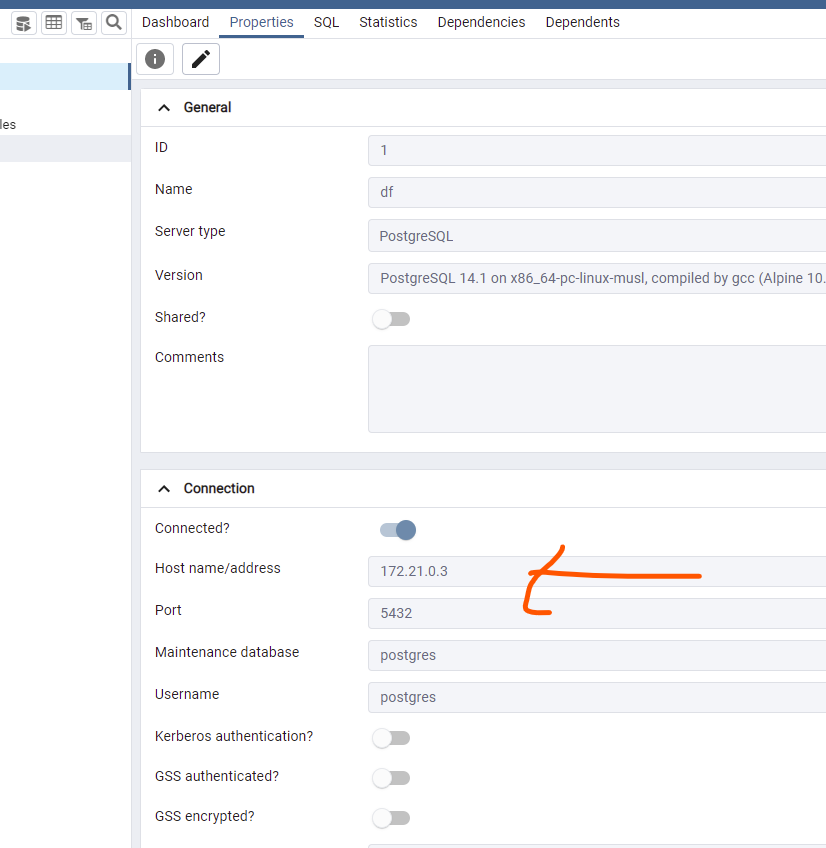 Now you can see the IP address shown in the network inspect. Choose the Postgres container IP. You can access other exposed ports through this IP. Here postgre 5432 is only exposed.Now set hostname as the container ip and it will work.

You can start your containers and should be set for local development/testing.

For some more details, you can see my article: Connect Docker containers the easy way

In my case, the host connection in the application to a container from an other container by the IP provide by the bridge didn't work.

But it works with the name of the container (see my screenshot).

So you can replace the IP by the name of the container.