How can I add the VS Command Prompt to Visual Studio 2010 C# Express?

When I install "real" editions, the command prompt exists as a tool, but not in the express edition?

How can I open the special command prompt, and have easier access to the various command-line tools that ship with Visual Studio and the .NET framework?

The VS command prompt is not a standaloneshell, but the standard cmd.exe with some EnvironmentVariables setup — through vcvarsall.bat

Charmingly, vcvarsall.bat only ships with the c++ edition, and resides in the Microsoft Visual Studio 10.0\VC folder.

So if you haven’t installed VS c++ Express — and you want to access the shell, you probably have to install VS c++ Express; that’s what I did, anyway. 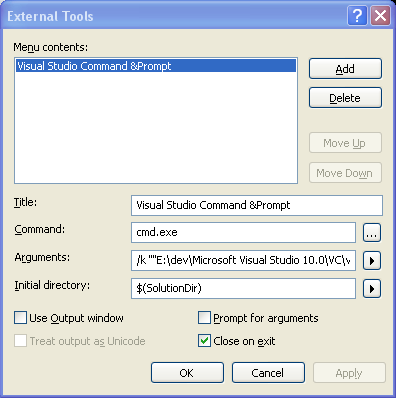 I have these notes @ http://www.xradiograph.com/Programming/VisualStudioExpress which were in turn adapted from http://visualbasic.about.com/b/2010/08/17/the-visual-studio-command-prompt.htm and other sources

You can download Windows SDK 7.1 Net (Framework) 4 for free. For XP, Vista,... Windows SDK 7.1 contains Command Prompt and that work perfect. I have tried with Visual Basic 2010 Express to create Client Windows Communication and it's perfect. See you soon.

Just install VC++ express edition. It will automatically install visual studio command prompt. you must have only installed vc# express not vc++ express. Try installing it and you will get command prompt, as it is for visual basic 2005 edition.

Not the answer you're looking for? Browse other questions tagged c# .net visual-studio visual-studio-2010 command-prompt or ask your own question.