I am trying to insert a figure in a RMarkdown document but am having trouble getting it to appear in the right place. The figure below shows the problem: when using a figure caption, the figure appears at the top of the page rather than below the relevant paragraph in the document. 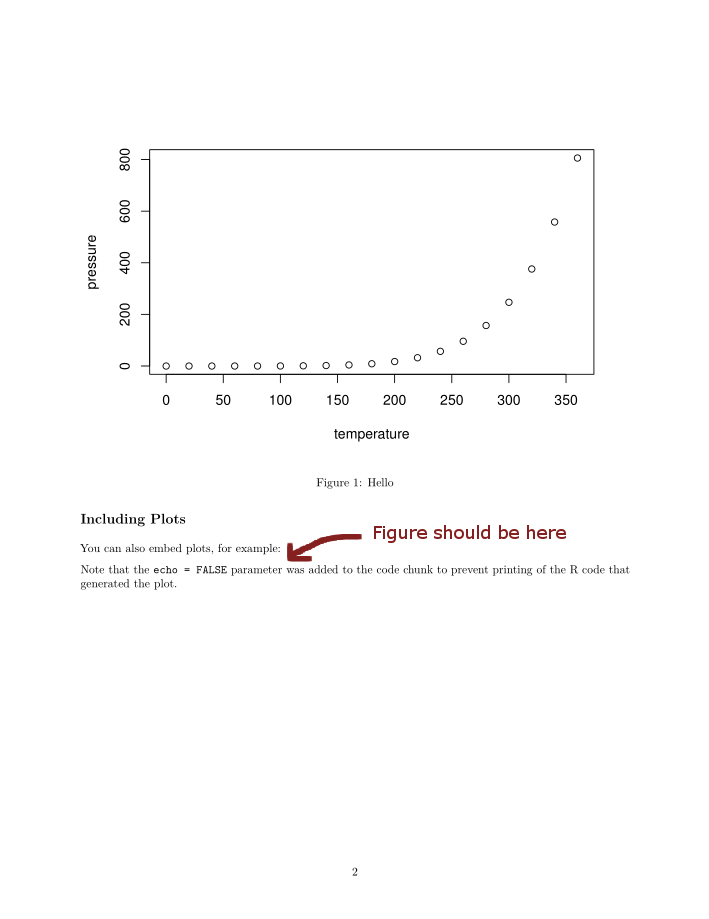 Here is the code for this minimum working example:

And here is the relevant part of the LaTeX output; note that the fig.pos option is ignored:

My set-up is described below. I'm pretty sure this worked in previous version of knitr, but I don't have a note of which version that might have been.

The chunk option fig.pos is only used when knitr thinks it has to write out a LaTeX figure environment instead of pure Markdown ![](), and it writes LaTeX only when a figure caption (fig.cap) is specified, and at least one of these options has been specified: fig.align, out.width, out.extra. If you want to force knitr to write LaTeX code for figures and use fig.pos, you may set the chunk option out.extra = ''.

I know this was answered by Yihui Xie already but I have an alternative solution that avoids the need to include out.extra = '' or any of the other option that were given while also not interfering with figures that are rendered without captions.

Simply add the latex package 'float' and use the \floatplacement{figure}{H} to ensure every figure with a caption is rendered in proper order within the text as you wanted. Alternatively it could be added to the .tex file used when RMarkdown knits a pdf, but I am fairly new to this and haven't had time to look into that option myself.

I found this fix by looking at the .tex file in the thesisdown package from Chestar Ismay

It is a fairly easy fix by just adding three lines into the YAML. I don't have enough reputation to post a screen shot of it working but you can just copy what I've done and try it yourself!

Not the answer you're looking for? Browse other questions tagged r knitr r-markdown figure or ask your own question.

54
How to hold figure position with figure caption in pdf output of knitr?
4
Hold table position in R-markdown
1
papaja: controlling text spacing when placing floats H
0
Plots do not render properly in markdown

10
knitr: Use an inline expression in fig.cap chunk option
7
knitr - Figure captions above
4
Knitr and Figure Caption in HTML
4
Figure caption for LaTeX diagram in R markdown using knitr
7
knitr: add to previous plot in new code chunk
5
Looping through a list of ggplots and giving each a figure caption using Knitr
3
How to get a newline in a figure caption in Rmarkdown bookdown pdf:document2
4
How to Customize figure LaTeX with knitr/rmarkdown