Run a task every x-minutes with Windows Task Scheduler [closed]

We don’t allow questions about general computing hardware and software on Stack Overflow. You can edit the question so it’s on-topic for Stack Overflow.

I'm trying to get Windows Task Scheduler to run a particular .exe every 10 minutes or so, but the options only allow for once a day execution.

The task must be configured in two steps.

First you create a simple task that start at 0:00, every day. Then, you go in Advanced... (or similar depending on the operating system you are on) and select the Repeat every X minutes option for 24 hours.

The key here is to find the advanced properties. If you are using the XP wizard, it will only offer you to launch the advanced dialog once you created the task.

On more recent versions of Windows (7+ I think?):

You can also create a batch file like the following if you need finer granularity between calls: 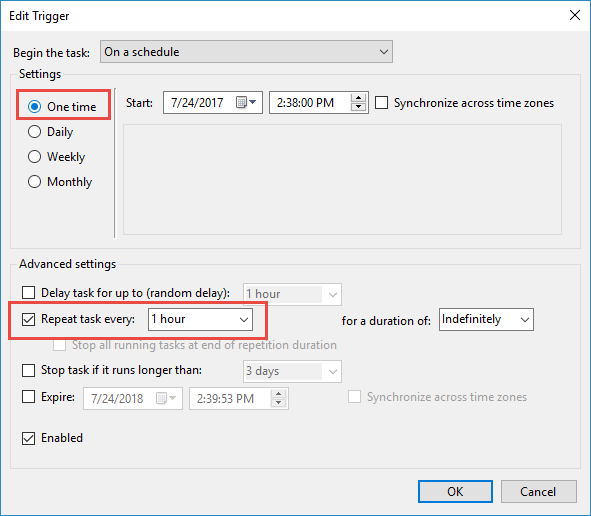 While taking the advice above with schtasks, you can see in the UI what must be done to perform an hourly task. When you edit trigger begin the task on a schedule, One Time (this is the key). Then you can select "Repeat task every:" 1 hour or whatever you wish. See screenshot:

In the "Repeat Task every:" just type 2 minutes instead of choosing from the dropdown list.

On XP, I clicked the Advanced button on the Schedule tab. There is a checkbox for Repeat task. The default is every 10 minutes.

Additionally, you can create scheduled task via the command line. I haven't tried this myself, but it looks like you'd want something along the lines of (not tested):

To schedule the update to be automatic you should:

If you cannot find the Schedule settings, look under: Properties, Edit, Triggers.

I thought doing an "Export" and editing the XML from: PT30M to PT2M

and importing that as a new task would "trick" Tasks into repeating every 2 mins, but it didn't like that

Not the answer you're looking for? Browse other questions tagged windows scheduled-tasks or ask your own question.

1
windows scheduler to run a batch script (.bat) every x-minutes?
4
how to continuously run a c# console application in background
5
how to get my script to repeat every 30 mins with python on windows
-2
Access to the database every 1 hour C#
0
function repetition every 15 minutes c#
2
how to make that my script posts every hour
0
How to script build schedule using Azure DevOps REST Api?
0
Notification to get changed files?
1
running script after specified time in windows 7
1
How to access the SPSite object from a separate thread in Sharepoint 2010 Sandbox
See more linked questions

1239
How can I develop for iPhone using a Windows development machine?
895
How to run a PowerShell script
196
Run a batch file with Windows task scheduler
1025
Can't start Eclipse - Java was started but returned exit code=13
923
How to upgrade Git on Windows to the latest version
1072
Filename too long in Git for Windows
1
Windows Task Scheduler job every two minutes