Can not see the add in after installing rubberduck?

I am new to rubberduck and have installed the latest version 2.0.11. After admin installed, I go to excel and check my com-addins and it does now show rubberduck there. I've check my programdata folder and yes, rubberduck is there with all files ect. It is just not showing up on my add in for excel. Help?

Disclaimer: I am one of the founders of the Rubberduck project

EDIT 2020-06: Rubberduck does not require administrative privileges to install anymore, and add-in registration occurs during installation. If the installation was made for "all users", the add-in needs to be registered for each user manually - the installer provides a start menu shortcut for this now, but this answer still accurately describes what's going on under the hood, and how to manually make it work.

Rubberduck is a VBE add-in, not an Excel or COM add-in; if it's properly registered as a VBE add-in you'll find it in the VBE's Add-In Manager, from the Add-Ins menu: 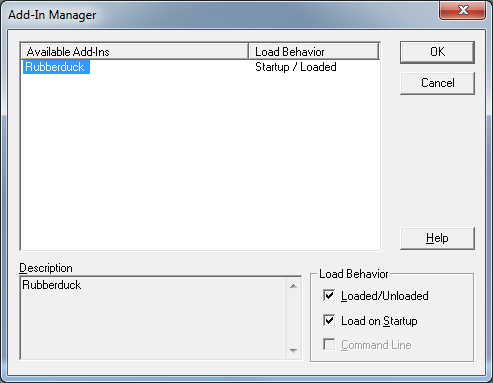 note: avoid loading/unloading Rubberduck from that window - there are known teardown issues (most of which are fixed in next release 2.0.12) that don't play well with the VBE's add-in manager.

The VBE looks for available add-ins under the HKCU hive, which is for the current user - if you're not the admin user that ran the installer, the VBE doesn't know there's a new add-in because there's nothing under HKCU that says so.

Per the installing instructions in the project's wiki:

The Rubberduck installer requires administrative privileges, notably to register the COM types that enable the unit testing feature. Because VBE add-ins need to be registered under the HKCU registry hive, the installer will create the Addins key for the admin user that is running the installer.

To register the add-in for a non-admin user, you need to run the following PowerShell commands:

This will safely create the required registry keys under HKCU, where the VBE is looking for its add-ins: HKCU:\Software\Microsoft\VBA\VBE\6.0\AddIns64. Note that 32-bit VBA hosts will be looking for add-ins under the \6.0\AddIns key.

Alternatively, you can create the missing keys manually in the registry editor:

ALT + F11 - on opening developer tool in excel. It will show the Rubberduck menu. 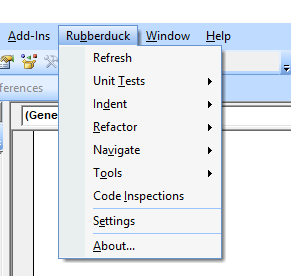 Not the answer you're looking for? Browse other questions tagged excel vbe rubberduck or ask your own question.

0
Run Time Error '1004', have researched and tried several recommended solutions to no avail
0
Rubberduck: not available in VBE, but loaded in Add-In-Manager