I'm having issues installing OpenAI Gym Atari environment on Windows 10. I have successfully installed and used OpenAI Gym already on the same system.

It keeps tripping up when trying to run a makefile.

I am running the command pip install gym[atari]

Here is the error: 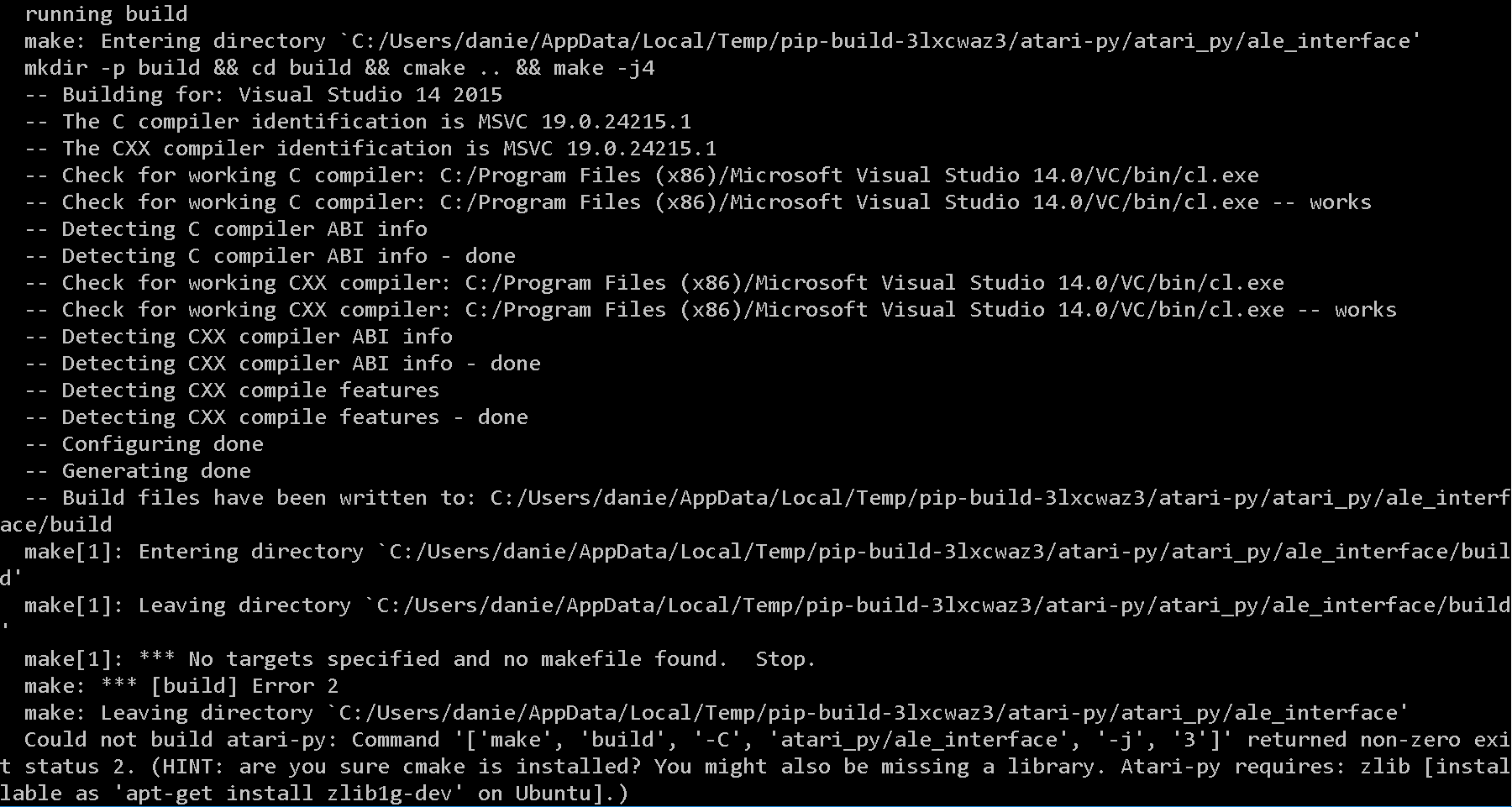 and here is what I currently have on my system...cmake and make are both clearly installed. 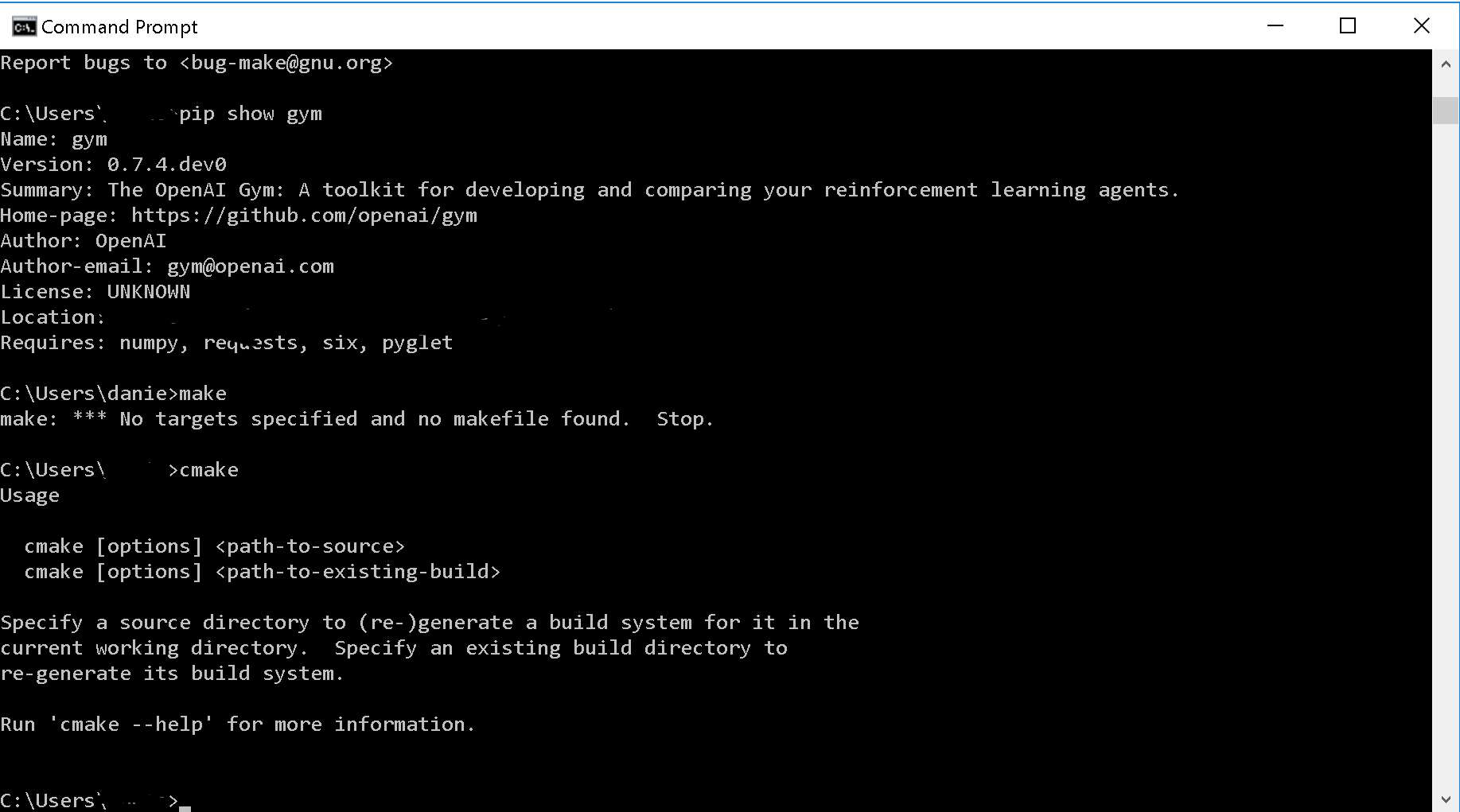 A while ago I have created a fork with Windows support (devs of original repository do not merge or even comment PRs and issues). It does not require neither MSYS/Cygwin nor CMake or Zlib.

To simply install atari-py wheels (binaries) use this command:

If you have any distutils supported compiler you can install from sources:

Test your installation with a simple example:

If your got a 'scrambled' output that's most likely because your gym is outdated.

This is not fully tested, because I don't remember exactly what I did, but currently I have openAI gym running with all the atari games set up and displaying, and also matplotlib plots, all while using ubuntu on windows (WSL). In fact I have sublimetext3 and spider working too.

So take these as a guide, but I don't have "clean" environment to test them on.

First, in Windows, Google "xming" (x11 server) and download from sourceforge / install / run. This is what makes it all possible.

Now in WSL bash install Anaconda. this will involve downloading the .sh file (eg with curl -O "[the http link to latest anaconda]" and running it with bash [the file].sh. Don't use sudo when installing Anaconda.

With anaconda installed, close WSL, and restart it. Now make an environment and activate it

Now get the gym repo

That's basically it. make sure Xming is running on windows, and in WSL type gnome-calculator, and it should bring up the calculator. if it doesn't, keep working on the display side. If it does, try running some of the agents in the gym examples folder.

I may have missed a couple extra dependencies along the way, but these would have been things I figured out based on error messages.

Here's the pic to keep you motivated: 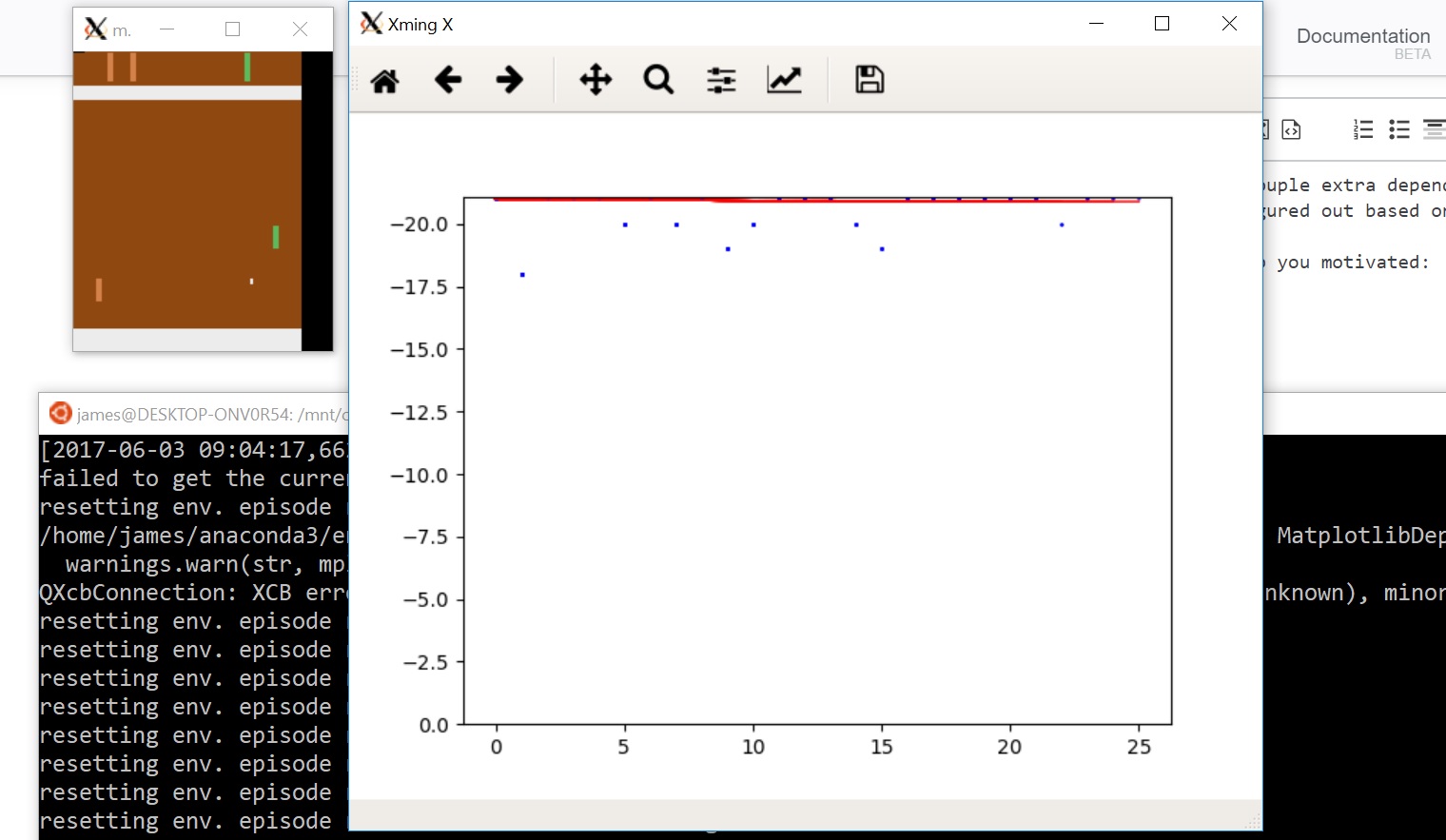 EDIT: Today I ran the following command which installed Qt5 as the back end, and matplotlib is working fine with Qt5Agg as the back end (vs TkAgg). This may be helpful if you're running some thing else on WSL which needs Qt5

Please note that there is NO GPU SUPPORT on ubuntu for windows. This is the top requested feature at uservoice, yet MS has it on "backlog". If you're interested, vote here

I ended up installing Bash on Ubuntu on Windows and using it to run the OpenAI Gym / Atari environment. OpenAI Gym has very limited support for Windows at the moment.

I encountered that gym now requires later version v0.1.4 of atari-py than any of other cloned repos.

Thanks to Nikita Kniazev - I ported his Windows edits to latest code from openai/atari-py and got gym working.

I had the same issue with the atari-py environment. Then I followed the steps in the Openai GitHub and then it worked.

Not the answer you're looking for? Browse other questions tagged python windows openai-gym or ask your own question.

7
How to install atari-py in Windows 10?
4
Setting up OpenAI Gym on Windows 10
3
OpenAI Gym not rendering colors correctly in console environments
1
Why does OpenAI Gym Atari give a wrong observation while rendering?
1
ImportError: Library “GLU” not found and Error occurred while running `from pyglet.gl import *`

2708
How can you find out which process is listening on a TCP or UDP port on Windows?
2547
Is there an equivalent of 'which' on the Windows command line?
2627
How can I install pip on Windows?
487
pip install fails with “connection error: [SSL: CERTIFICATE_VERIFY_FAILED] certificate verify failed (_ssl.c:598)”
0
Python OpenAI Atari module in Ubuntu 16.04 - “No module named atari_py.”
1
OpenAI gym: Trouble installing Atari dependency (Mac OS X)
4
Setting up OpenAI Gym on Windows 10
1
OpenAi Gym Installation - python version mismatch