How can I sync the computer's clock upon startup?

I have several servers hosted with GoGrid, and every time I reboot one of my cloud servers, the system clock is incorrect. The server isn't a member of a domain, so I just have the OS set to sync with an Internet time server. This only happens once a day, and I don't see an option to make this happen automatically upon reboot. So I'm left with writing some code to do it for me.

I created a batch file with the "w32tm /resync" command, and scheduled it to run on system startup, but it doesn't work because the network connection isn't available when the batch file is run. How can I cause the time sync to start after the OS is fully loaded and the network connection is available? I need the time to be correct ASAP after the computer boots so timestamps in my database will be correct.

In Windows 10, I went to services and enabled "Windows Time" service w32time to be automatic, that solved it for me.

My issue occured because I have a dual boot with Linux and for some reason Windows's clock is always off after I boot in Linux.

On Windows 2008, there is an option in the Task Scheduler that will allow you to wait until a network connection is available before the task is run. In the task properties dialog, create a new "At Startup" trigger, and be sure to check the "Enabled" box. Add an action to run your batch file. Finally, add a Condition to start the task only if the network connection is available. I then asked it to restart the command up to 3 times if it failed. That seems to work great.

On older versions of Windows, use the following batch file contents to retry the sync command until it is successful, or until it has retried too many times.

Normally the Windows Time Service should take care of this for you.

Do you have the service running?

As pointed out here this may be related to having a dual boot system with windows 10 and linux.

In my case the service was set to be run only manually and therefore was never triggered as one would suspect. Adjusting the service to be run automatically on startup within the services administration of windows solved the issue for me. 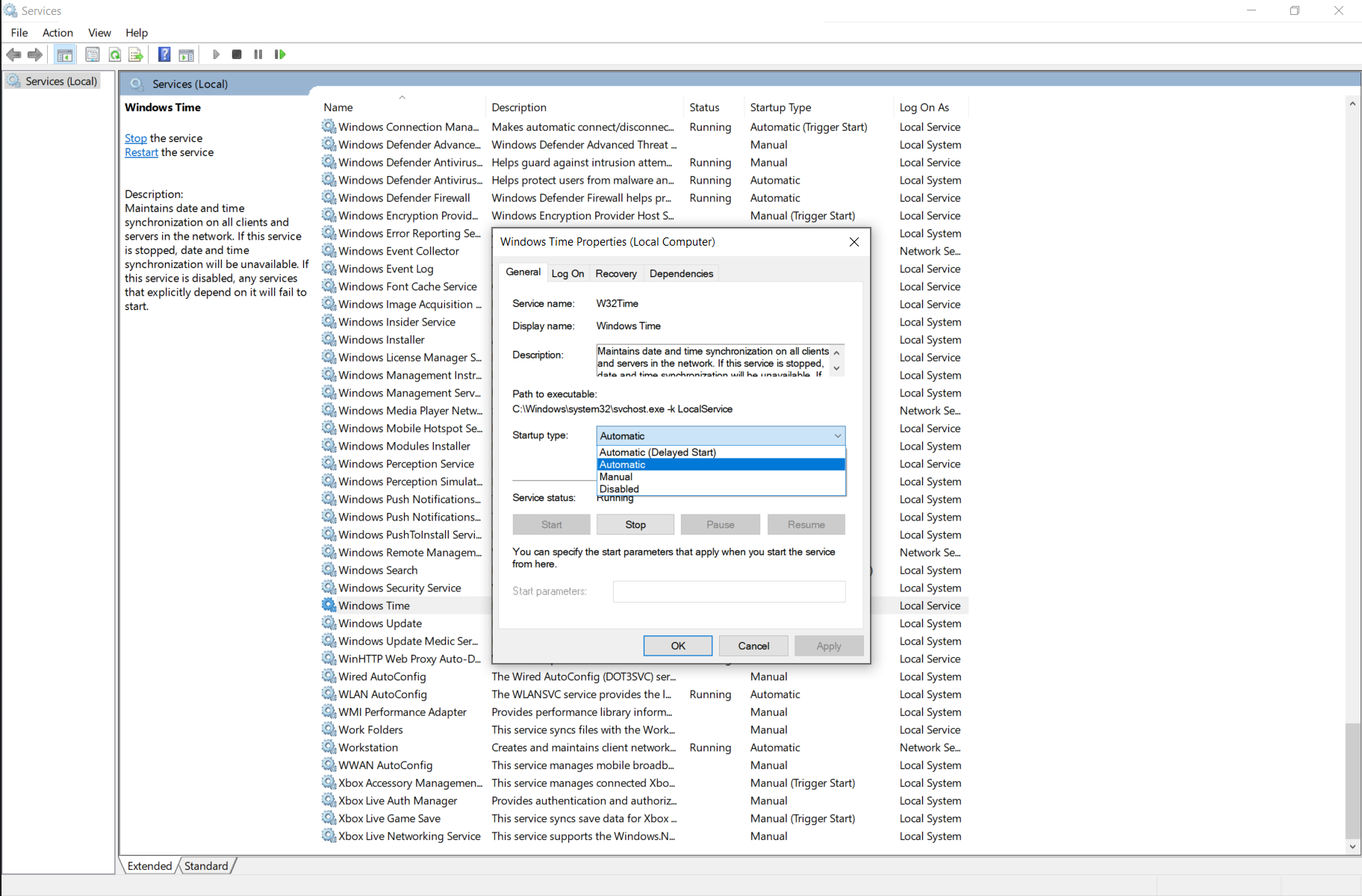 Open a terminal (as Admin) and run this command:

Use this if you are joined to domain
net time /domain

If you get a The service has not been started. (0x80070426) error, then it means that you need to start the Windows Time service, wait a minute, and try again.

If you get a The computer did not resync because no time data was available error, then you should be able to try again until successful.

Windows 10: Synchronize Clock with an Internet Time Server in Windows 10

EDIT: you may want to put a 30 second or so hold in the script to allow for the network connections to refresh. Totally didn't read your question right.

Found this semi-randomly. New choice.exe syntax for Win 7+ to insert a 10-second pause

I should have realized that I needed to run this batch file as an administrator for it to work, but once I figured that out, I only had to make a minor adjustment to the choice command for it to work like a charm.

Like the above user, I too have a dual boot between Ubuntu 18.04 and Windows 7, where booting to Ubuntu set's the System Clock to UTC and the OS adjusts for GMT, whereas it looks like Windozz sets the system clock to the time zone.

Setting to the task scheduler was easy enough, my only specific issue is that I have my laptop connect to my FritzBox for time, so I guess my updates will only happen when I'm at home. (Its' easy enough to swap the NTP back to one of the presets, so I'm not concerned)

Not the answer you're looking for? Browse other questions tagged windows datetime batch-file or ask your own question.