To get a a better understanding of fork() system call , i am randomly playng between fork() and print statement but got stuck in one such code ,the code is

Here is the output obtained-: 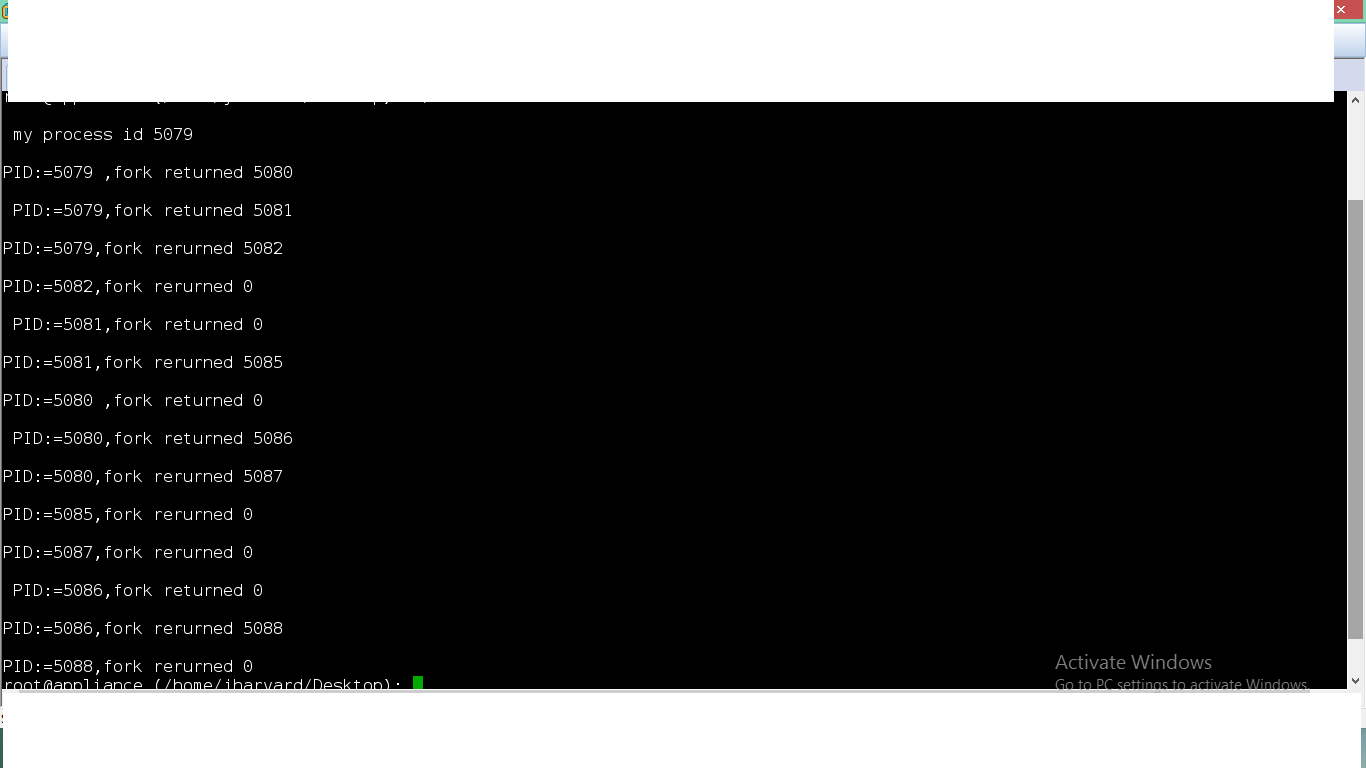 I am not able to get the print sequence it is following.Only thing i am getting is that first the process with PID 5079 is executing ,and for all the fork() system call,it is returning child PID to the parent process.I am not getting the further sequence.

The fork() might seem a little confusing at first, but its actually pretty simple. What it does is copy the current process into a new process in another memory location (copy everything, its data, code, current instruction, ...).

So the print statement after the fork will be executed by the Parent Process and the Child Process with different getpid() value and different pid1 values, the parent has getpid() = 5079, and pid1 = child's pid = 5080 (you can see this in the third line of the output). The child will make its own print statement, with getpid() = 5080 and pid1 = 0, you can see this in the 8th line of the output, but why the 8th line!!!

The operating system schedules the process, that is, it decides which process the CPU will work on and for how long. so it seems that the OS decided that the parent process (pid = 5079) should run for a little longer, and left the child process (pid = 5080) waiting for the CPU to execute its instructions.

So process 5079 went on with the next fork, creating a new child process with pid = 5081. Then it printed what we expect in the third line, then it went on to the last fork creating process 5082, printing what we would expect in the forth line, then terminating (process 5079 terminated, leaving 5080,5081,5082 waiting, and Adopted by the OS, they need to have a parent, but this isn't important to the output).

Now that 5079 terminated, we have 3 processes waiting in the memory for the CPU to work them. The operating system must decide which process to run, and it seems to have choose the process that is closest to terminate, which is process 5082, let's look at the remaining instructions for each process:

Why is this the remaining code? any process created by a fork in some other process will start executing after that fork statement like we have seen earlier. so process 5082 printed line 5 then terminated (its value of pid3 = 0 because it is a child of 5079). After terminating of 5082, 5081 took the CPU, and it printed line 6, then created process 5085 as we can see in line 6 (why not 5083 in order? maybe the OS created some process during the execution of your code).

Operating systems is a fascinating field, its fun to go beyond the system calls, if you are interested in this I would recommend this book, it is what I studied in college: https://www.amazon.com/Operating-System-Concepts-Abraham-Silberschatz/dp/0470128720

Not the answer you're looking for? Browse other questions tagged operating-system fork computer-science system-calls or ask your own question.