Problems generating solution for VS 2017 with CMake

My VS installation is with the Game development with C++ workflow + a few other components: 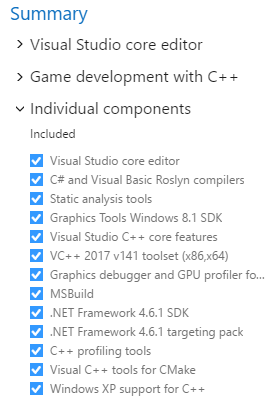 I've also added the CMake stuff (but I don't think I even needed it - since I'm using CMake as a standalone tool to just generate the VS solutions) and MSBuild (I had msbuild.exe even before adding that component - so not sure what exactly does that additional component do).

With VS 2015 I was able to just run cmake . from a normal command prompt for a solution.

With VS 2017 the workflow changes - I've read this post from Microsoft.

So I tried the following:

I also tried setting up the environment using vswhere.exe and running vcvarsall.bat like this:

and again I could only generate NMake files and not a solution.

So how can I get a solution?

Turning my comments into an answer

The error -- The CXX compiler identification is unknown - No CMAKE_CXX_COMPILER could be found. basically means that CMake wasn't able to compile a simple test program (which it always does as part of identifying/validating the compiler).

You can take a look into CMakeFiles\CMakeError.log (relative to your binary output directory), the error reason should be in there.

Two possible reasons I came across so far:

Please note the Visual Studio may not install all necessary C++ packages even when you select one of the C++ pre-defined packages (as I have e.g. used Desktop development with C++ and then added more packages under the Individual Components tab).

Here is which selection worked for me (VS2017 Community Edition, Windows 10): 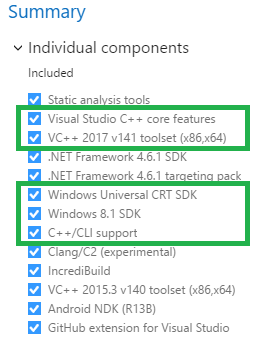 If you have projects using MFC/ATL libraries you need to add it under SDKs, libraries, and frameworks subcategory:

I'm using Windows 7.... And after @Florian told me in the comments to look into CMakeFiles/CMakeError.log I managed to fix the problem!

It seemed I needed Windows SDK version 8.1 so I installed it as a component (had only version 10 installed). But then there was another error:

So LINK : fatal error LNK1104: cannot open file 'ucrtd.lib' sounds a lot like I needed to install more components - and so I did:

And after that the problem is gone!

If you have the Windows 10 Creator's Update SDK installed, it doesn't install the desktop binaries by default, in order to keep the installation size down. CMake will always try to use the latest SDK when it compiles, which will fail as it will be missing binaries such as "gdi32.lib" (that's the first error that occurs for me).

The Windows 10 Creators Update SDK has been refactored to reduce installation footprint by default. When you Install this SDK via the UWP workload, it will not install the headers/libs required for Win32 C++ Desktop Projects.

In order to fix the problem, you need to modify the Visual Studio installation to include the Windows 10 SDK (10.0.15063.0) for Desktop component.

Can tell my experience. After reading CMakeFiles/CMakeError.log found an error

Option 1: I have no intention to use "Spectre-mitigated" libraries and want just to restore previous build behavior.

That means that we need to turn off generating Visual Studio project with correspondent compilation flags on by default since CMake does that to check whether compiler exists and operational.

Solution is not very elegant, but works. Put/copy file with name 'Directory.Build.props' to /build folder with content:

That overrides default VS behavior and disables /QSpectre compiler switch.

I encountered a similar problem.

All required components are installed

In my case (Wireshark building), an error was in the wrong toolset. CMake determines v141 while the actual version is v140.

From my experience the "base" of this CMake workflow problem is the (in this case) really misleading error message "No CMAKE_C[XX]_COMPILER could be found."

My problem was a missing ucrt.lib (although the Win10 SDK was there; copied, not "installed", my fault).

158
CMake error at CMakeLists.txt:30 (project): No CMAKE_C_COMPILER could be found
34
LINK : fatal error LNK1104: cannot open file 'MSVCRTD.lib'
24
The CXX compiler identification is unknown
27
Changing current cmake generator
9
CMake cannot open "ucrtd.lib"
15
Set the directory for Intermediate files (like .obj) in CMake
0
VS 2010 and CMake: 'rc' is not recognized as an internal or external command

123
CMake unable to determine linker language with C++
0
CMake and Visual Studio with not default installation folder
1
Error in Cmake "The C compiler identification is unknown"
0
Compile CMake based project with minGW
5
How to force cmake to use Visual Studio 2015 (v140) platform toolset?
3
How to install and configure 'cmake' in MSYS2?