This codepen creates a grid of red cells 100*50 px on Chrome. This is the expected behavior. 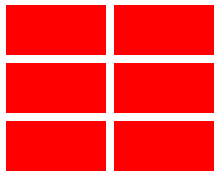 Firefox 52 completely ignores the padding-bottom: 50%; and I don't know why.

I can't find any workaround. Can someone please help me?

Authors should avoid using percentages in paddings or margins on grid items entirely, as they will get different behavior in different browsers.

Percentage margins and paddings on grid items can be resolved against either:

A User Agent must choose one of these two behaviors.

Note: This variance sucks, but it accurately captures the current state of the world (no consensus among implementations, and no consensus within the CSSWG). It is the CSSWG’s intention that browsers will converge on one of the behaviors, at which time the spec will be amended to require that.

Authors should avoid using percentages in paddings or margins on grid items entirely, as they will get different behavior in different browsers.

Auto margins expand to absorb extra space in the corresponding dimension, and can therefore be used for alignment.

Flexbox, another CSS3 technology, has the same problem.

Here's how I implemented the padding-bottom trick for a video nested in a flex container (see last bullet point): https://stackoverflow.com/a/39310591/3597276

It's probably a temporary solution which is subject to change due to the CSS grid being brand new.

Not the answer you're looking for? Browse other questions tagged css firefox css-grid or ask your own question.