How to make web form post directly to Google Sheets without authentication page?

I simply want to create a landing page that has a form that saves visitors email address in a Google Sheet.

I found this useful post that has a google app script that does the work. I followed the instructions (on my localhost) and here is the request code:

But when I click on submit I get this error:

Which is kind of weird, considering that I have already published the app to be accessible from everyone as depicted here: 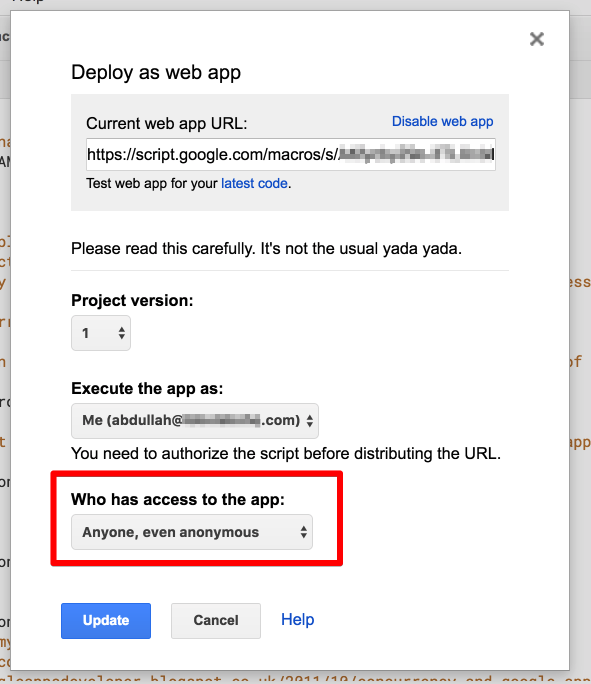 Fair enough, I need to use CORS to access Google APIs.

The instructions above require that users authenticate themselves, so this is what a user flow would look like on my landing page:

given user adds email in text field
when user clicks on get started button
then
expected
the form should submit just fine
actual
a Google Authentication screen shows up, and asks people to authorize the app

How can I make the web form run the Google App script without?

Interestingly, I tested the same script on the blog post and it works fine, but if I copy the url of the script there https://script.google.com/macros/s/AKfycbzV--xTooSkBLufMs4AnrCTdwZxVNtycTE4JNtaCze2UijXAg8/exec" and call it from my webservice, I get the same CORS error message.

So this is proof that the script can't just be called by anyone, it must be whitelisted somehow. How can I do that?

The author of the blog article implied that I should be using https, working on setting that up.

So as instructed by Spencer Easton I'm calling it like so:

however I keep on getting undefined,

I tried to debug my Google App script code using instructions from here like so:

This code worked perfectly and updated the spreadsheet as expected. So what am I missing here? How is Google App script exactly interpreting the jsonp data?

Since you are returning JSON you have to use JSONP.

Not the answer you're looking for? Browse other questions tagged javascript jquery ajax google-apps-script cors or ask your own question.

2609
How do I modify the URL without reloading the page?
572
“Origin null is not allowed by Access-Control-Allow-Origin” error for request made by application running from a file:// URL
827
How to access POST form fields
693
Why doesn't adding CORS headers to an OPTIONS route allow browsers to access my API?
834
How to make an AJAX call without jQuery?
356
CORS: Cannot use wildcard in Access-Control-Allow-Origin when credentials flag is true
725
No 'Access-Control-Allow-Origin' header is present on the requested resource—when trying to get data from a REST API
4
How do i allow a CORS requests in my google script?