Could not load file or assembly 'System.ValueTuple'

I've got a VS2017 project that compiles to a DLL which is then called by an EXE written by someone else. Both projects target .Net Framework 4.6.2. I rewrote one of my DLL methods to return a tuple and also imported the associated NuGet package. When I compile the project it includes System.ValueTuple.dll in the output directory which is then deployed to other machines where my DLL is loaded and called by the EXE. But when the EXE attempts to call the method that returns a tuple it crashes:

Unexpected Error Could not load file or assembly 'System.ValueTuple, Version=4.0.1.0, Culture=neutral, PublicKeyToken=cc7b13ffcd2ddd51' or one of its dependencies. The system cannot find the file specified.

I'm not understanding why it's not finding the file since it's in the same folder as my DLL. Apparently MS did not include this assembly in .Net Framework 4.6.2.

Note that my DLL is registered in Windows using a machine.config file. I'm guessing that if I also add System.ValueTuple.dll to this file it will work (haven't tried yet and not sure this is the best approach, especially long term.) Is there a better way, besides waiting for 4.6.3 and hoping it includes this assembly?

ok this feels completely wrong but I cut

This out of my web.config for the main application.

I was really just seeing what happened to see if there was an underlying dependency or something, not expecting it to run. It just carried on working, all the new functions I have added in the last few days still work.

I just had this issue myself. Not on Localhost while developing, but only on production server. In the end it turned out to be some sort of conflict between .Net Framework 4.6.1 and me having System.ValueTuple installed from Nuget in version 4.5.0.

The solution turned out to be, to downgrade the System.ValueTuple Nuget package to 4.3.0. Then it worked, like nothing had ever been an issue.

I suspect that this only happened on production server, cause of a different version of .net framework installed.

Solved it by installing .NET Framework 4.7.2 Runtime on the machine the error occurred on. Simple and no need to add bindingRedirect or downgrading NuGet packages.

Adding on to Robin's answer for just changing the Web.config. I was able to get away with only commenting out the binding redirect tag.

This got rid of the error for me.

I resolved this issue by registering System.ValueTuple in my computer's machine.config file (along with my own DLL which was already registered there). I don't particularly like this approach though since it's dependent upon the DLL version which is subject to change at any time. Hopefully MS will just add this assembly to the next version of the .Net Framework.

I hade the same issue, i solve the probleme by changing the target framwork of the project to .Net Framwork 4.7.1.

In my solution I found 2 different trouble maker. Either in the App.config or Web.config file:

In another case I managed to fix the issue by removing unneeded references and getting rid of the ValueTuple NuGet package altogether.

My issue was that I was developing against 4.6.1, but releasing on 4.7.2. Luckily I don't mind which .Net framework this project was built for, so I installed 4.7.2 on my developer instance, then upgraded all the Nuget packages.

In my case I think something delete this dll from project and framework folders, maybe during installing something it flied; so my project during debugging couldn't find that dll and throw that error. I installed

Package and than everything worked again. Before doing further complicated solutions as described above answers may installing ValueTuple package works for you.

If you have AutoMapper version 8.0 or lower referenced in any of your projects, it's possibly the source of the issue. See this github issue for more information.

The easiest solution is to upgrade your AutoMapper references to version 8.1.0 or newer, where they have scraped all uses of the assembly from their codebase and removed the dependency.

I experienced the same error "Could not load file or assembly System.ValueTuple.dll..." on my Windows Server 2016. However, the site worked fine on my dev machine.

My solution was simple, I grabbed this dll from my dev machine and dropped it in the site's "bin" folder on the server. It worked.

I hope this isn't thread necromancy, because this is still the #1 searched thing on Google. None of the other comments worked for me sadly.

We resolved this issue recently after over a year with this problem. The issue was a package called 'GitVersion'. So for anybody who is still struggling with this and looking around the forums I know quite a few are; I would advise you check your packages and see what their dependencies are.

Right clicking References and choosing "Migrate packages.config to PackageReference..." solved the problem for me (and other similar issues).

I had this same issue with an AutoMapper 8.0.0.0 dependency on version 4.5 after upgrading from .NET 4.5.1 to 4.6.1. Reinstalling the automapper nuget package worked for me.

IF your are unable to update .Net Framework to the latest version, then downgrade Package: Microsoft.Net.Compilers to the version up to 2.10. This solved the issue in my case.

I had a library which used a newer version of the System.ValueTuple NuGet package. I then used another library which caused me to use the older version installed in the main project for the first time. That caused this exception to reveal itself. Updating both (or, converging them in any way - downgrading both is fine too) - fixed the issue.

I resolved this issue by installing System.ValueTuple from nuget. It was not previously installed but I guess RestSharp or another library is using it.

So this got it fixed.

Fixed this by switching the Copy Local flag on my reference to System.ValueTuple from copy always to none. (It was on an assembly containing tests).

I had this issue in a Visual Studio setup/installer project. For some reason my project had multiple instances of System.ValueTuple.dll: 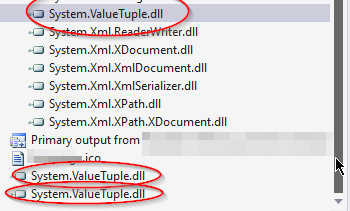 Deleting the extras at the bottom made the setup project build. For one of them I had to right click, choose "Find In Editor", and delete from the resulting window. Otherwise I got a cryptic error (something to the effect of "the parameter is incorrect" if I recall correctly).

0
System.ValueTuple cannot find the file specified Winform
2
Could not load file or assembly 'System.ValueTuple Visual Studio 2017 15.8 node js project
2
Puppeteer-Sharp library did not worked and not created page in web service(wcf) project
0
Is it possible to get System.ValueTuple 4.5.0 onto a TFS 2015 server?
1
Using SQLite on AWS EC2
0
Received compile error when upgrading from 2018R1 to 2018R2