This Boolean attribute is set to indicate to a browser that the script is meant to be executed after the document has been parsed, but before firing DOMContentLoaded. The defer attribute should only be used on external scripts.

The DOMContentLoaded event is fired when the initial HTML document has been completely loaded and parsed, without waiting for stylesheets...

P.S: Please note that google says that CSSOM is built before executing any inline javascript

So if a user visits our website with all js required already cached and CSS not cached OR js gets downloaded before CSS then (s)he might see an incorrectly rendered page. To avoid this we should add force reflow in all our websites' js files.

I use deferred script loading. There was a lengthy technical explanation from some guy who is a well known website performance guru. He clearly states that deferred is the way to go (for this and that technical reason, backed by all kinds of data and charts, that many people seemed to feel was wide open for debate, re: async).

So I started working with it. Deferred scripts have the advantage of downloading async, but executing in the order presented, which can be a problem with async (e.g. you can load your app bundle before your vendor bundle because you don't control the execution order of async scripts just by saying "in this order").

However, I found out right away that although this solves that problem, this could mean, depending on how you grab your bundles, the CSS bundle isn't loaded. So you can end up with unstyled content, depending on how you set things up. Note that for defer, they also say that you shouldn't be writing to the dom etc. in those scripts (which again makes sense in terms of your documentation).

So it would seem your documentation is correct. The effect is easily reproduced.

How do I get out of it; the most basic way, is like this:

This makes sure that the css loads in first, so your home page and so on will show up nicely, and also ensures that (although all three are loading async), that app.bundle will execute last, ensuring all other dependencies are in order.

So, you take the absolute bare minimum of CSS required to kick over the app, create that as a bundle, and load it first, before anything. Otherwise you can bundle in your CSS per module/component, and so on.

There's a lot more to this topic and I could probably be doing more, but again (I will try to find the reference), this was overtly recommended by that performance wizard, so I tried it and it seems pretty effective to me.

Edit: Fascinating, while looking for that reference (which I haven't found yet), I went through a handful of "experts" on the subject. The recommendations differ wildly. Some say async is far superior in all regards, some say defer. The jury really seems out on the topic, overall I'd say it probably has more to do with exactly how you build out your scripts than whether one is actually better than the other.

Edit again: Here's some more evidence. I ran a performance analyzer on a stub website using the above simple loading sequence, deliberately making the scripts naive so they'd be visible in a timeline.

Here's an SS of the result: there are four yellow boxes here. The first three are the evaluations of the scripts. The fourth one (when you mouse over it in the tool, this is just the SS remember) is the DOMContentLoaded event (the one with the red corner).

I didn't really read the spec though. The following are based on actual behaviors of Chrome (observed on Chromium 68, Ubuntu). Behaviors may vary among browsers, if they were just undefined in specifications. For example in 2010 scripts don't always wait for proceeding stylesheets. I assume agreements had been achieved and behaviors had been standardized over the years.

The defer scripts are executed after domInteractive, before domContentLoaded; it's sequential.

domInteractive and domContentLoaded are two timestamps which could be viewed in Chrome devtools' Performance (previously Timeline) tab. Probably also in other similar tools, but I haven't tried.

domInteractive is the point when HTML parsing and initial DOM construction are finished (and all "sync" scripts have finished executing). document.readyState changes from 'loading' to 'interactive'; a readystatechange event fires on document accordingly.

All defer scripts are executed in their appearing order. Then comes domContentLoaded, a DOMContentLoaded event fires on document.

DOM & CSSOM construction don't rely on each other; but sync scripts may introduce dependencies.

Each sync script, internal or external, waits for preceding stylesheets to be parsed (of course, after fetched).

Yes, sync scripts are not blocked by subsequent stylesheets. MDN and Google and other articles say "scripts depend on CSSOM to be ready"; they (probably) didn't mention that only preceding parts are depended.

P.S: Please not that google says that CSSOM is build before executing any inline javscript

Google didn't say that (at least, as of the time I read this article).

On the contrary, before one sync script is fetched (if external) and executed, any code following it, HTML, stylesheets or other scripts, can't be parsed/executed/constructed. They block anything subsequent to them.

So, in specific cases, eg. without sync scripts, DOMContentLoaded event may fire before or after CSSOM is ready. That's what MDN means by saying "without waiting for stylesheets".

defer/async scripts don't care about stylesheets at all.

Different from sync scripts, defer/async scripts don't wait for preceding stylesheets, and don't block subsequent stylesheets/scripts either. They are removed from those "dependency chains" completely. You can't rely on any proceeding stylesheets to have been parsed.

These should well explain hinok's two examples, the former async (from Google) and the latter defer。

I don't have much experience on working with CSSOM at page loading (I do operate on DOM at page loading, though), so I can't provide reliable advises. It seems "load event on window" or "force reflow early" might work.

DOMContentLoaded can be fired before CSSOM, source

The domContentLoaded event fires shortly after the HTML is parsed; the browser knows not to block on JavaScript and since there are no other parser blocking scripts the CSSOM construction can also proceed in parallel.

Article on Google Developer describes async instead of defer but in the case of your question, it doesn't change anything because based on Steve Sourders article on perfplanet

[...] the spec says that DEFER scripts run after domInteractive but before domContentLoaded.

You can make your own experiment, look below for code using defer and timeline 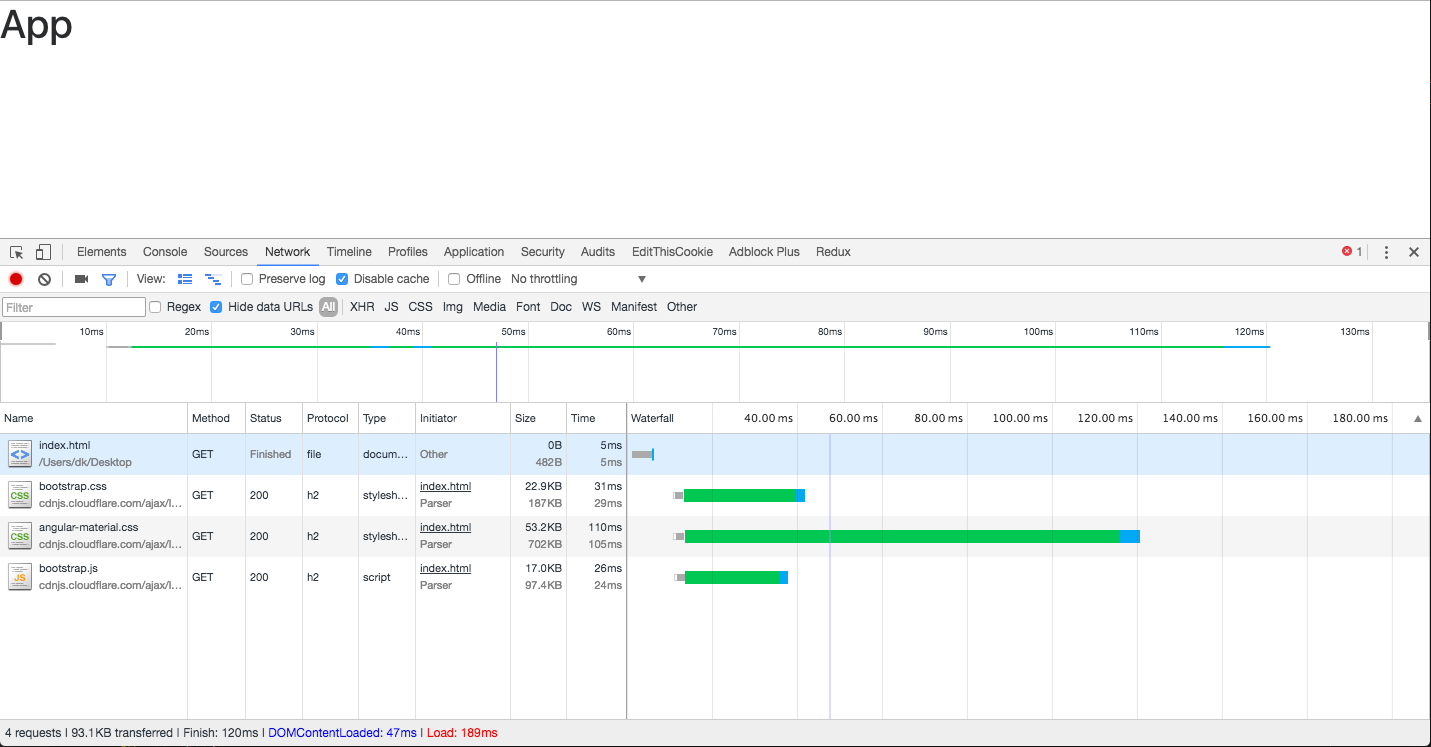 Not the answer you're looking for? Browse other questions tagged javascript html css dom cssom or ask your own question.

0
If inline javascript code will be executed before document load event?
156
"Eliminate render-blocking CSS in above-the-fold content"
2
Does the async attribute represent a contract to not change the DOM?
12
Why don't transitions on svg work on DOMContentLoaded without delay?
3
Is DOMContentLoaded fired after downloading all script tags?
2
Misconception of DOMContentLoaded event
0
Why it show defer as async and async as defer? Get "dom parsed event" right! But there are no?
1
Javascript code executed before css is downloaded and parsed
2
Is CSSOM created only when the html page has link for external sheet or is it even created when we have inline styling or internal css?