What is the difference between a task and a service in AWS ECS?

A Task Definition is a collection of 1 or more container configurations. Some Tasks may need only one container, while other Tasks may need 2 or more potentially linked containers running concurrently. The Task definition allows you to specify which Docker image to use, which ports to expose, how much CPU and memory to allot, how to collect logs, and define environment variables.

A Task is created when you run a Task directly, which launches container(s) (defined in the task definition) until they are stopped or exit on their own, at which point they are not replaced automatically. Running Tasks directly is ideal for short running jobs, perhaps as an example things that were accomplished via CRON.

A Service is used to guarantee that you always have some number of Tasks running at all times. If a Task's container exits due to error, or the underlying EC2 instance fails and is replaced, the ECS Service will replace the failed Task. This is why we create Clusters so that the Service has plenty of resources in terms of CPU, Memory and Network ports to use. To us it doesn't really matter which instance Tasks run on so long as they run. A Service configuration references a Task definition. A Service is responsible for creating Tasks.

Services are typically used for long running applications like web servers. For example, if I deployed my website powered by Node.JS in Oregon (us-west-2) I would want say at least three Tasks running across the three Availability Zones (AZ) for the sake of High-Availability; if one fails I have another two and the failed one will be replaced (read that as self-healing!). Creating a Service is the way to do this. If I had 6 EC2 instances in my cluster, 2 per AZ, the Service will automatically balance Tasks across zones as best it can while also considering cpu, memory, and network resources.

I'm not sure it helps to think of these things hierarchically.

Beautifully explained in words by @talentedmrjones. Picture below will help you visualize it easily :)

This is the blueprint describing which Docker containers to run and represents your application. It includes several tasks. 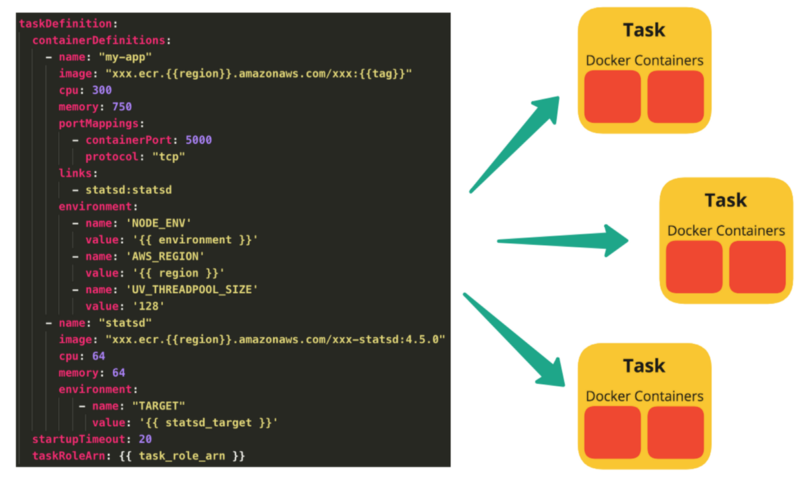 An instance of Task Definition. It also defines the minimum and maximum Tasks from one Task Definition run at any given time, autoscaling, and load balancing.

This is an EC2 instance that has Docker and an ECS Container Agent running on it. The Agent takes care of the communication between ECS and the instance, providing the status of running containers and managing running new ones. 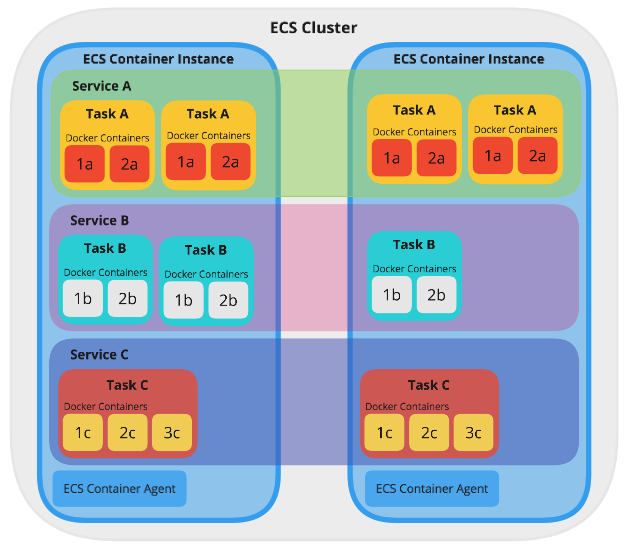 You are defining your containers and how to launch them via Task definitions. You describe how containers should be provisioned (link to ECR’s saved container images, CPU units, Memory, Container ports to expose, network type).

Task definitions specify the container information for your application (web), such as how many containers are part of your task, what resources they will use, how they interact with each other and which host port they will use. It can be of Fargate and EC2 type.

Not the answer you're looking for? Browse other questions tagged amazon-web-services amazon-ecs or ask your own question.

562
What is the difference between Amazon SNS and Amazon SQS?
158
What is the difference between Amazon ECS and Amazon EC2?
21
AWS ECS restart Service with the same task definition and image with no downtime
38
AWS ECS Task Memory Hard and Soft Limits
6
What is an ECS Task Group and how do I create one?
2
AWS ECS multiple task definition on one cluster
1
How to run an AWS ECS task inside a service of AWS ECS cluster and not ouside the service from Circle CI's “aws-ecs/run-task”
1
ECS :Define varying count of tasks for containers inside task definiton