xcrun: error: unable to find utility "PackageApplication", not a developer tool or in PATH - Since updating Xcode

Updated Xcode this morning and now ionic project wont deploy to a device.

No idea what to do to fix, Googling returns lots of options but none correct.

Cordova is trying to use PackageApplication tool. But it was removed since Xcode 8.3. ( Thanks @guyromb for this )

If you have Xcode 8.2.1 or any version below 8.3, copy PackageApplication script from /Applications/Xcode.app/Contents/Developer/Platforms/iPhoneOS.platform/Developer/usr/bin

paste the copied/downloaded above file here. 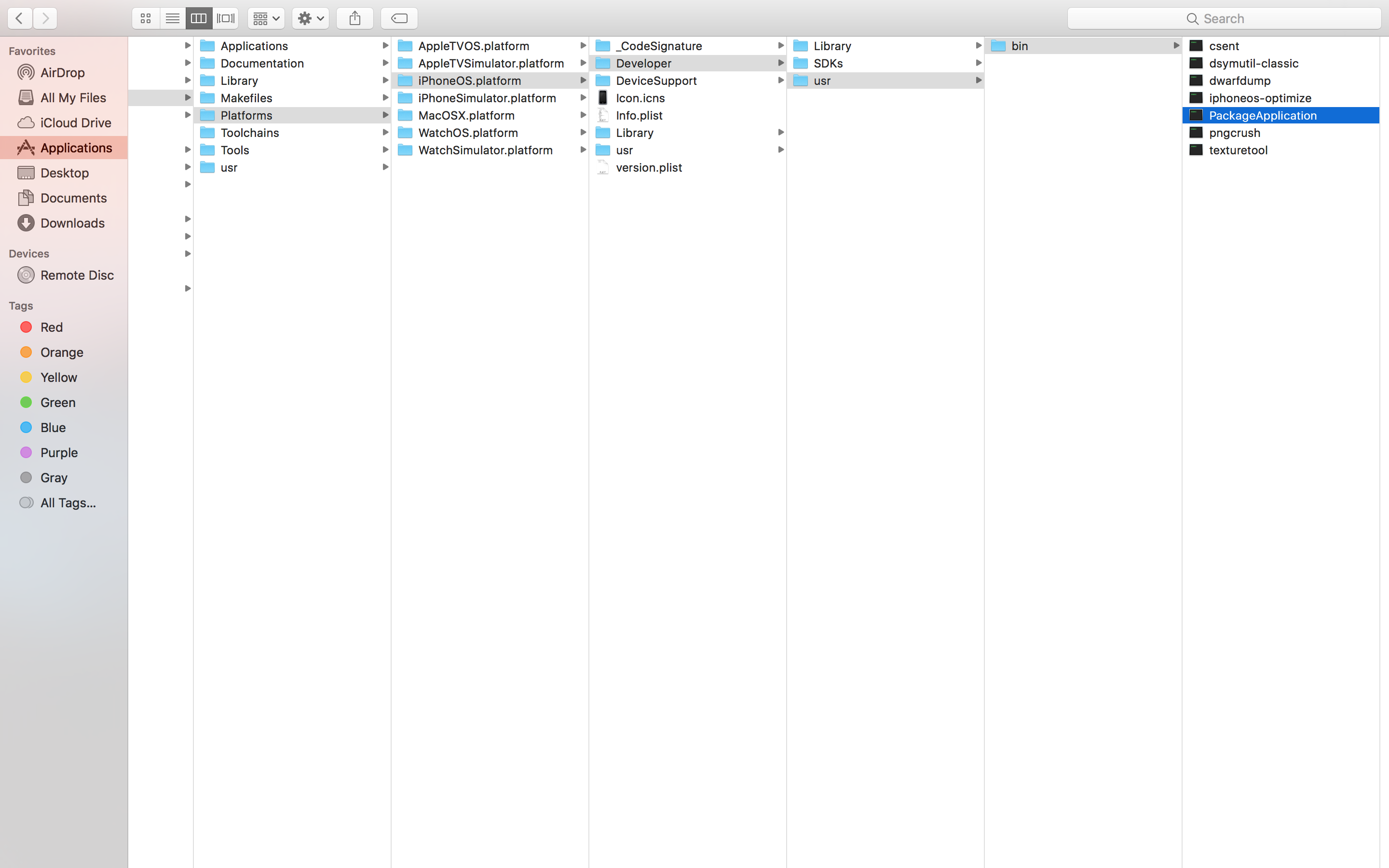 Cordova is trying to use "PackageApplication" tool. But it was removed since Xcode 8.3. Either downgrade Xcode or wait for Cordova to have a fix for that.

Linked in the Jenkins issue that matson kepson mentioned here there was a guy who attempted a PR to fix the issue. There was some unfinished change requests in his PR and I also found a few null ptrs in his changes. I forked his pr and fixed these things here and there is now a snapshot linked here that you can download and become unblocked until such a change is merged into the full build.

Hi its official Bug from jenkins

here you have a fresh status

Little bit clearer to look at this:

I've just come across this and my solution was to remove the iOS platform from the project:

Then add it back in again

I needed to run an initial build for it to fail with no signing set, so opening up the project in Xcode to just fix that. After that, building via the ionic cli worked as expected. I am guessing that re-adding the platform pulled in a new version of cordova-ios.

Update: I had only started on this project and created the base project from the blank template. I have Xcode 8.3.1 installed and using Ionic 3 (still with the --v2 switch with ionic cli).

I used shenzhen this automatic procedure encountered a similar problem, and finally in accordance with the github Pull Request to solve my problem, hope for your reference! https://github.com/nomad/shenzhen/pull/347

After this, stop debug using Ctrl C, and your app will be working on your device.

Hope work for you guys.

The is caused by the deprecated PackageApplication. If you're using the remotebuild tool to run from Windows, it will be solved when the remotebuild bug has been fixed: https://github.com/Microsoft/remotebuild/issues/26

Another solution is to downgrade XCode.

Here if the explanation on how to uninstall current XCode.

An option is open a .xcodeproj file located at platforms/ios and run the project directly from Xcode.

Not the answer you're looking for? Browse other questions tagged ios xcode ionic-framework or ask your own question.