It's probably really obvious once you know the answer, but I can't find it anywhere. 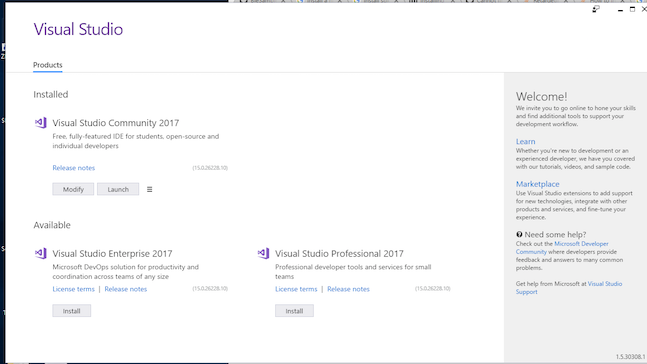 the screen I need is this one: 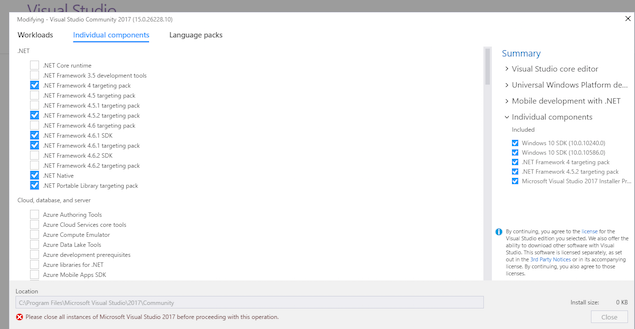 In Visual Studio 2017, there is a menu entry for "Extensions and Updates" under the Tool menu that doesn't take me to this application. There is also a "NuGet Package Manager" which isn't even close.

In the Control Panel - Programs and Features, I see Microsoft Visual Studio 2017 but right-click only gives me "Uninstall".

I also found it a bit strange that you cannot modify the installation from Control Panel - Programs and Features. You can however launch the Visual Studio 2017 installer from the following location:

You can get to the installer via

Select Microsoft Visual Studio 2017 from the list and click Change at the top. The installer will magically open up.

The screenshots you show are the VS 2017 installer. This allows you to select from the large number of optional components that can be included in the VS install. Run by running the downloaded installed file you started the original install with.

Tools | Extensions and Updates is used to extend and service VS.

NuGet: is a package manager for projects built with VS. Adding a component that the software you are writing uses. Soemthing like jQuery in a web app. This does not change VS itself.

You can find Visual Studio Installer on below location

Under Projects/New in VS there is a link to go to the Installer. That is the easiest way to start the Installer and get to the positions (panels) you want.

Not the answer you're looking for? Browse other questions tagged visual-studio windows-10 visual-studio-2017 or ask your own question.

4
Microsoft Bot Framework, there is a missing subtype