What is a sparse file and why do we need it?

What is a sparse file and why do we need it? The only thing that I am able to get is that it is a very large file and it is efficient(in gigabytes). How is it efficient ?

Say you have a file with many empty bytes \x00. These many empty bytes \x00 are called holes. Storing empty bytes is just not efficient, we know there are many of them in the file, so why store them on the storage device? We could instead store metadata describing those zeros. When a process reads the file those zero byte blocks get generated dynamically as opposed to being stored on physical storage (look at this schematic from Wikipedia): 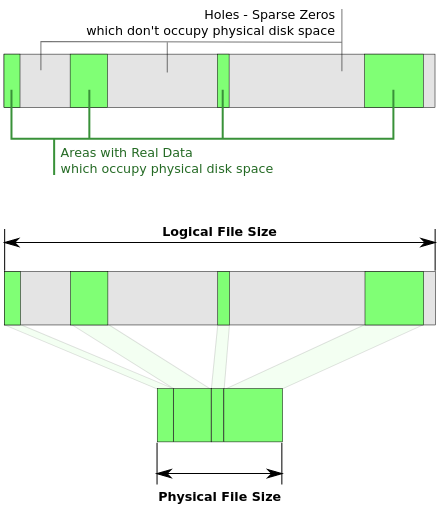 This is why a sparse file is efficient, because it does not store the zeros on disk, instead it holds enough data describing the zeros that will be generated.

Note: the logical file size is greater than the physical file size for sparse files. This is because we have not stored the zeros physically on a storage device.

The command here copies 4G blocks of null bytes to output. To see that:

You can see that this file has 8388616 blocks allocated to it, these blocks store nothing but empty bytes copied from /dev/zero and they do occupy physical disk space, they're holes stored on disk (sparse zeros). dd did what you asked for, copying blocks of data from one file to another.

Now, run this command to detect the holes and make the file sparse in-place:

Also notice how the size remained the same. This is the logical (virtual) size of the file, not its size on disk. It's crucial to know that output doesn't occupy physical storage space now, it has 0 blocks allocated to it and thus I doesn't really use disk space. The size preserved after running fallocate -d so when you later read from the file, you get the empty bytes generated to you by the filesystem at runtime. The physical size of output however, is zero, it uses no data blocks.

Remember, when you read output file the empty bytes are generated by the filesystem at runtime dynamically, they're not really physically stored on disk, and the file's size as reported by stat is the logical size, and the physical size is zero for output. In this case the filesystem has to generate 4G of empty bytes when a process reads the file.

A sparse file is a file that is mostly empty, i.e. it contains large blocks of bytes whose value is 0 (zero).

On the disk, the content of a file is stored in blocks of fixed size (usually 4 KiB or more). When all the bytes contained in such a block are 0, a file system that implements sparse files does not store the block on disk, instead it keeps the information somewhere in the file meta-data.

More information about sparse files can be found on the Wikipedia page.

Not the answer you're looking for? Browse other questions tagged file filesystems system disk sparse-file or ask your own question.

0
Why is numpy.memmap initialization so fast?
14
what is file hole and how can it be used?
1
What is the most efficient way to copy many files programmatically?
0
How to create a link to a file stored in internet / cloud but appears as a 'local file' in Windows Explorer?
0
I cant merge two files in a third one
-1
File bigger than the size of the partition it's in

6713
How do I check whether a file exists without exceptions?
1217
How do I get file creation and modification date/times?
540
Quickly create a large file on a Linux system
1910
Undo working copy modifications of one file in Git?
1843
Why should text files end with a newline?
6046
How do I include a JavaScript file in another JavaScript file?
2026
How to read a file line-by-line into a list?
1927
How do I append to a file?
733
How do I call a function from another .py file?
941
Exploring Docker container's file system