Does WebKit have a clipping bug?

NB: I tidied up this question in 2021 to remove a dead link and make the code a live demo. With a cursory check, the problem appears to no longer exist in the current version of Chrome.

Given a region where the line-height and any margins are n, and the region has a height that is a multiple of n, and the scrollTop is increased by multiples of n I find that I get the result I expect in Firefox, Opera and NetFront but in Chrome (Windows), Safari (Mac) and the latest WebKit nightly (Mac) there is some leakage and I see partial lines.

In my actual project (which I can't share) the effect is quite pronounced, but even in a reduced test case, the bottom of the previous line can be seen peeking out at the top of the box.

Is it possible to avoid this effect? Is this a bug in the WebKit rendering engine that should be reported?

The reduced test case can be seen below. Click on the document a few times to scroll it and not the dots at the top of the box (which are the bottom of the letters of the previous line).

It appears this has to do with descenders (qjpg) "sticking out" down below the line-height box. Firefox and Safari seem to agree on how to do this - characters are allowed to stick out. However by exaggerating the sizes x 10, we notice something interesting for sans-serif.

In Mac OS X, both Safari and Firefox chose helvetica as the typeface for sans-serif. But Firefox moves that particular typeface upwards in the line-height box, so the bottom doesn't "stick out". Compare with arial - microsoft's bastardization of helvetica where both browsers let it stick out. 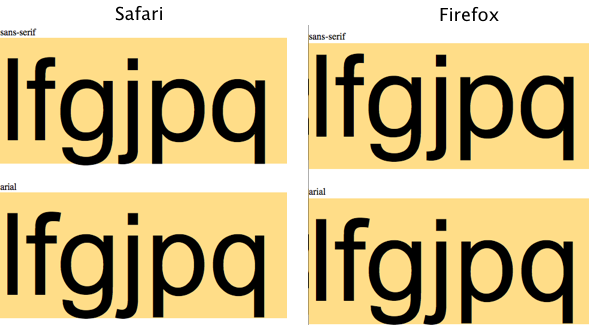 I think the solution to your problem is to find a "reasonable" negative margin to offset the content upwards. It seems both helvetica and arial have some "wiggle room" at the top of the box. I would use #wrapper #content { margin-top: -1px; } (selector extra strong to overcome #wrapper *) for the specific font-size/line-height in your example.

Here's my test code. It shows that the "sticking out" can be much worse for geneva and verdana.

Have you tried increasing line height by 1px? I tried it in Chrome and it works:

Alternatively you can reduce the font size by 1px which also works for me:

Not the answer you're looking for? Browse other questions tagged javascript html css webkit scrolltop or ask your own question.

14
WebKit vs Mozilla vertical alignment of font glyphs in box