I'm fighting with that issue for 2 days already and can't find any solution.

I have an Xamarin Android app in Visual Studio 2017 consisting of three projects:

However few days ago I updated my Visual Studio 2017 with the newest available update and now, when trying to build this android-specific unit tests project I get the following error:

The file "obj\Debug\android\bin\packaged_resources" does not exist.

I've searched everywhere, including this and this SO topics. I also totally reinstalled Visual Studio 2017 and Xamarin with Android SDK included. Nothing helped. From what I read I suspect there is something wrong with the versions of Android SDK Build-tools I have installed. Here's what I have currently installed in SDK Manager: 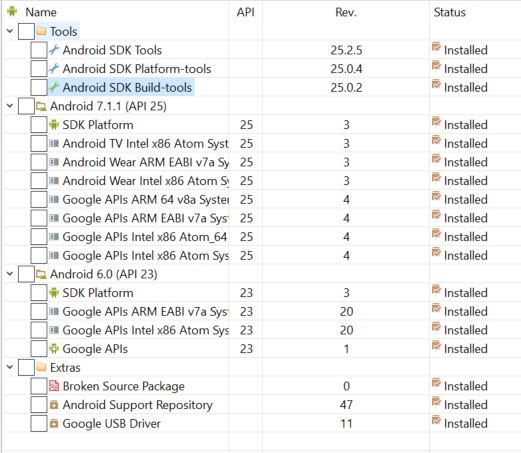 As the other SO threads suggested, I tried uninstalling the newest Android SDK Build-tools (25.0.2) and installed version 23.0.3 (all my projects target Android 6.0), but it also doesn't help, I still have the same error.

Maybe it's worth adding that this issue may have started to happen when I tried to implement RecyclerView in my app reading this tutorial, where they suggested to install Android 7.1.1 (API 25) in SDK Manager. However I undoed my all changes after that and even reintalled VS2017 + Xamarin.

Do you have any other idea why this can be ? I'd really appreciate any help. Thanks!

Egh, I removed VS2017, installed VS2015 with brand new Android SDK and still the same issue :(

I've finally found what was the issue. It wasn't related to any component from SDK Manager or VS version.

Following localization tutorial from developer.xamarin.com, I played a bit with Strings.xml in my Android project. I wanted to have my Activities Label taken from resources as well, so in the ActivityAttribute I defined:

and added this value in Strings.xml file:

In that case my build is failing with above-mentioned error:

The file "obj\Debug\android\bin\packaged_resources" does not exist

When I change ActivityAttribute to use a string directly:

the build is passing without any issues.

I managed to find a solution, but actually I don't know why it's not building when I try to use Label text defined in Strings.xml.

BTW, I managed to find what's the problem by setting build output verbosity to Diagnostic in Tools -> Options -> Projects and Solutions -> Build and Run which gives a detailed info why the build failed in the Output window.

I had the same problem. After removing the dash "-" sign from the image file name, the problem is solved. Bad error message! It should not be:

The file "obj\Debug\android\bin\packaged_resources" does not exist.

Writing an error message like this causing the Developer to think about something else while the problem is the illegal file name.

I had the same issue when I added a new image as a resource. There was a '-' in the file name (Invalid resource name character). I renamed & removed that character and all good. Resource name can only consist of 0-9,a-z or A-Z or combination of any.

I had the same problem, and i removed all image file name have "-" character. My problem solved

Another reason for this error is that you may have a float number as your version number. In my case I changed it to a integer and everything worked fine. (I found the error by switching the build output to Detailed)

Mine was a different solution (and only half a day lost): I was having trouble getting Hockey app to match crashes against the correct version of the app and realised it uses VersionCode not VersionName so I change my code to "0.0.34" the same as the name. For some still unknown reason the app built and deployed to devices for about 3 days before I started getting this error The file "obj\Debug\android\bin\packaged_resources" does not exist. Setting it back to a numeric value fixed the problem.

It just because the Version Code,I set Code by '1.0',The file "obj\Debug\android\bin\packaged_resources" does not exist.;And I set it by '1',everything is ok.

Had the same error, the way I got over it was crank up the Android SDK manager and install all updates and remove any obsolete packages. This happened to me because I was targeting something newer which was not installed.

After following several online suggestions - updating SDK, updating Xamarin etc - none of which worked for me.

Removing this line - and rebuilding worked fine without any errors and was able to deploy solution successfully.

Note : testing this by putting the line back, and I get same error again on rebuilding. It can be linked to using any android provider which creates the package for it, not necessarily AlarmClock only.

This error is, somewhat of, a wrapper for what can be multiple reasons that that the file was not created. The key is to look in the detailed output and look for the underlying error causing the file creation failure.

In my case, I had corrupted icon.png files (generated right from from the VS xamarin nunit template, no less!). Once I put in valid png files, everything was built fine.

Another reason for this error, if that the android NDK (not android SDK) isn't right, change de version can resolve the problem: go to Tools/Options/Xamarin/android Configurator and change de folder, in my case I've three, the last one can't compile, but the second folder with version xx.r11c do it.

For me it was Target Android Version.I had it set to

but changing it to Compiling version(for me it was the latest platform) resolved the issue.

Not the answer you're looking for? Browse other questions tagged android xamarin xamarin.android visual-studio-2017 or ask your own question.

40
Android App Compile Not Generating Package Resources
0
Cannot build android project
0
How to get information about a failed build in Visual Studio Xamarin
0
Xamarin.Android: Can not debug