What is the difference between a DateTime and a DateTimeOffset and when should one be used?

Currently, we have a standard way of dealing with .NET DateTimes in a TimeZone-aware way: Whenever we produce a DateTime we do it in UTC (e.g. using DateTime.UtcNow), and whenever we display one, we convert back from UTC to the user's local time.

That works fine, but I've been reading about DateTimeOffset and how it captures the local and UTC time in the object itself.

DateTimeOffset is a representation of instantaneous time (also known as absolute time). By that, I mean a moment in time that is universal for everyone (not accounting for leap seconds, or the relativistic effects of time dilation). Another way to represent instantaneous time is with a DateTime where .Kind is DateTimeKind.Utc.

This is distinct from calendar time (also known as civil time), which is a position on someone's calendar, and there are many different calendars all over the globe. We call these calendars time zones. Calendar time is represented by a DateTime where .Kind is DateTimeKind.Unspecified, or DateTimeKind.Local. And .Local is only meaningful in scenarios where you have an implied understanding of where the computer that is using the result is positioned. (For example, a user's workstation)

So then, why DateTimeOffset instead of a UTC DateTime? It's all about perspective. Let's use an analogy - we'll pretend to be photographers.

Imagine you are standing on a calendar timeline, pointing a camera at a person on the instantaneous timeline laid out in front of you. You line up your camera according to the rules of your timezone - which change periodically due to daylight saving time, or due to other changes to the legal definition of your time zone. (You don't have a steady hand, so your camera is shaky.)

The person standing in the photo would see the angle at which your camera came from. If others were taking pictures, they could be from different angles. This is what the Offset part of the DateTimeOffset represents.

So if you label your camera "Eastern Time", sometimes you are pointing from -5, and sometimes you are pointing from -4. There are cameras all over the world, all labeled different things, and all pointing at the same instantaneous timeline from different angles. Some of them are right next to (or on top of) each other, so just knowing the offset isn't enough to determine which timezone the time is related to.

And what about UTC? Well, it's the one camera out there that is guaranteed to have a steady hand. It's on a tripod, firmly anchored into the ground. It's not going anywhere. We call its angle of perspective the zero offset. 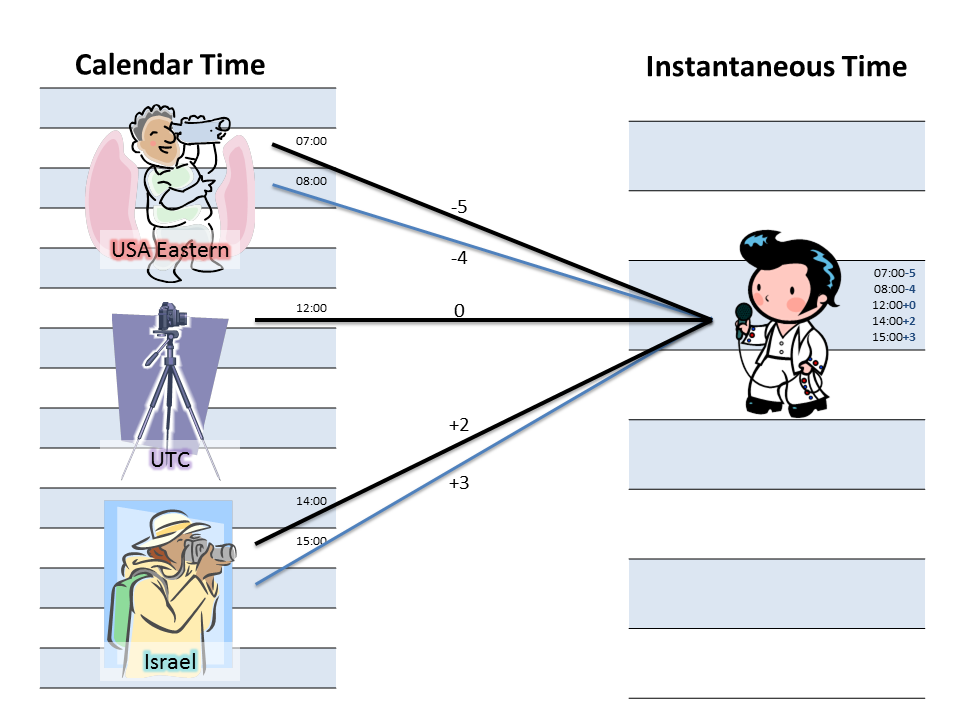 So - what does this analogy tell us? It provides some intuitive guidelines-

Here are a few other little bits about DateTimeOffset that back up this analogy, and some tips for keeping it straight:

Many people have shared with me that they find this analogy extremely valuable, so I included it in my Pluralsight course, Date and Time Fundamentals. You'll find a step-by-step walkthrough of the camera analogy in the second module, "Context Matters", in the clip titled "Calendar Time vs. Instantaneous Time".

We use DateTimeOffset for nearly everything as our application deals with particular points in time (e.g. when a record was created/updated). As a side note, we use DATETIMEOFFSET in SQL Server 2008 as well.

I see DateTime as being useful when you want to deal with dates only, times only, or deal with either in a generic sense. For example, if you have an alarm that you want to go off every day at 7 am, you could store that in a DateTime utilizing a DateTimeKind of Unspecified because you want it to go off at 7am regardless of DST. But if you want to represent the history of alarm occurrences, you would use DateTimeOffset.

Use caution when using a mix of DateTimeOffset and DateTime especially when assigning and comparing between the types. Also, only compare DateTime instances that are the same DateTimeKind because DateTime ignores timezone offset when comparing.

DateTime is capable of storing only two distinct times, the local time and UTC. The Kind property indicates which.

DateTimeOffset expands on this by being able to store local times from anywhere in the world. It also stores the offset between that local time and UTC. Note how DateTime cannot do this unless you'd add an extra member to your class to store that UTC offset. Or only ever work with UTC. Which in itself is a fine idea btw.

There's a few places where DateTimeOffset makes sense. One is when you're dealing with recurring events and daylight savings time. Let's say I want to set an alarm to go off at 9am every day. If I use the "store as UTC, display as local time" rule, then the alarm will be going off at a different time when daylight savings time is in effect.

There are probably others, but the above example is actually one that I've run into in the past (this was before the addition of DateTimeOffset to the BCL - my solution at the time was to explicitly store the time in the local timezone, and save the timezone information along side it: basically what DateTimeOffset does internally).

The most important distinction is that DateTime does not store time zone information, while DateTimeOffset does.

Although DateTime distinguishes between UTC and Local, there is absolutely no explicit time zone offset associated with it. If you do any kind of serialization or conversion, the server's time zone is going to be used. Even if you manually create a local time by adding minutes to offset a UTC time, you can still get bit in the serialization step, because (due to lack of any explicit offset in DateTime) it will use the server's time zone offset.

For example, if you serialize a DateTime value with Kind=Local using Json.Net and an ISO date format, you'll get a string like 2015-08-05T07:00:00-04. Notice that last part (-04) had nothing to do with your DateTime or any offset you used to calculate it... it's just purely the server's time zone offset.

This piece of code from Microsoft explains everything:

TLDR if you don't want to read all these great answers :-)

Using DateTimeOffset because the timezone is forced to UTC+0.

Using DateTime where you hope everyone sticks to the unwritten rule of the timezone always being UTC+0.

(Side note for devs: explicit is always better than implicit!)

(Side side note for Java devs, C# DateTimeOffset == Java OffsetDateTime, read this: https://www.baeldung.com/java-zoneddatetime-offsetdatetime)

A major difference is that DateTimeOffset can be used in conjunction with TimeZoneInfo to convert to local times in timezones other than the current one.

This is useful on a server application (e.g. ASP.NET) that is accessed by users in different timezones.

The only negative side of DateTimeOffset I see is that Microsoft "forgot" (by design) to support it in their XmlSerializer class. But it has since been added to the XmlConvert utility class.

I say go ahead and use DateTimeOffset and TimeZoneInfo because of all the benefits, just beware when creating entities which will or may be serialized to or from XML (all business objects then).

So, DateTimeOffset stores information about how the time relates to UTC, basically the time zone.

Not the answer you're looking for? Browse other questions tagged c# .net datetime timezone datetimeoffset or ask your own question.

2129
How do I calculate someone's age based on a DateTime type birthday?
385
How to convert local time string to UTC?
2053
How to return only the Date from a SQL Server DateTime datatype
2999
Should I use the datetime or timestamp data type in MySQL?
2804
Converting string into datetime
430
How do I get a value of datetime.today() in Python that is "timezone aware"?
284
How to convert a UTC datetime to a local datetime using only standard library?
277
Convert UTC datetime string to local datetime
705
How to make a timezone aware datetime object
505
How to initialize a JavaScript Date to a particular time zone