Git internals: how does Git store small differences between revisions?

As I understand, some VCSs store differences between revisions, because, well, the differences are sometimes small - one line in a source code is changed or a comment is added in a subsequent revision. Git, on the other hand, stores compressed "snapshots" for each revision.

If only a small change has been made (one line in a large text file), how does Git treat this? Does it store two copies that are almost identical? This would be an inefficient use of space, I'd think.

Git use patches or hunks. It calculate the diff introduced between the 2 version and store it.

store two copies that are almost identical? This would be an inefficient use of space, I'd think.

Git scans your code (heuristics) and once only store differences. If git finds the same code in multiple files it generate hunk for the similar code and store pointer to it in the the original location.

To make it simple - its much more complicated than how its explained below, making it simple so you can understand it more easily.

Once your code is scanned git search for changes from previous commit, if a change is found git split the old change to a hunk.
If you added code in a middle of the file so it will be splitted to 3 hunks (top = old code, middle - new code, bottom - old code) and now you will have 3 hunks. Next time git will scan your code he will use those 3 hunks to search for changes.

For example: Lets say that you have a bunch of files with the license agreement on top of each file and this is identical in all of your files.
Git will scan the files and the first hunk will be stored as patch, on all other files git will place a pointer pointing to this hunk.

This way git store the information in a very efficient way.

If you want to see it action use git add -p and select s for split. 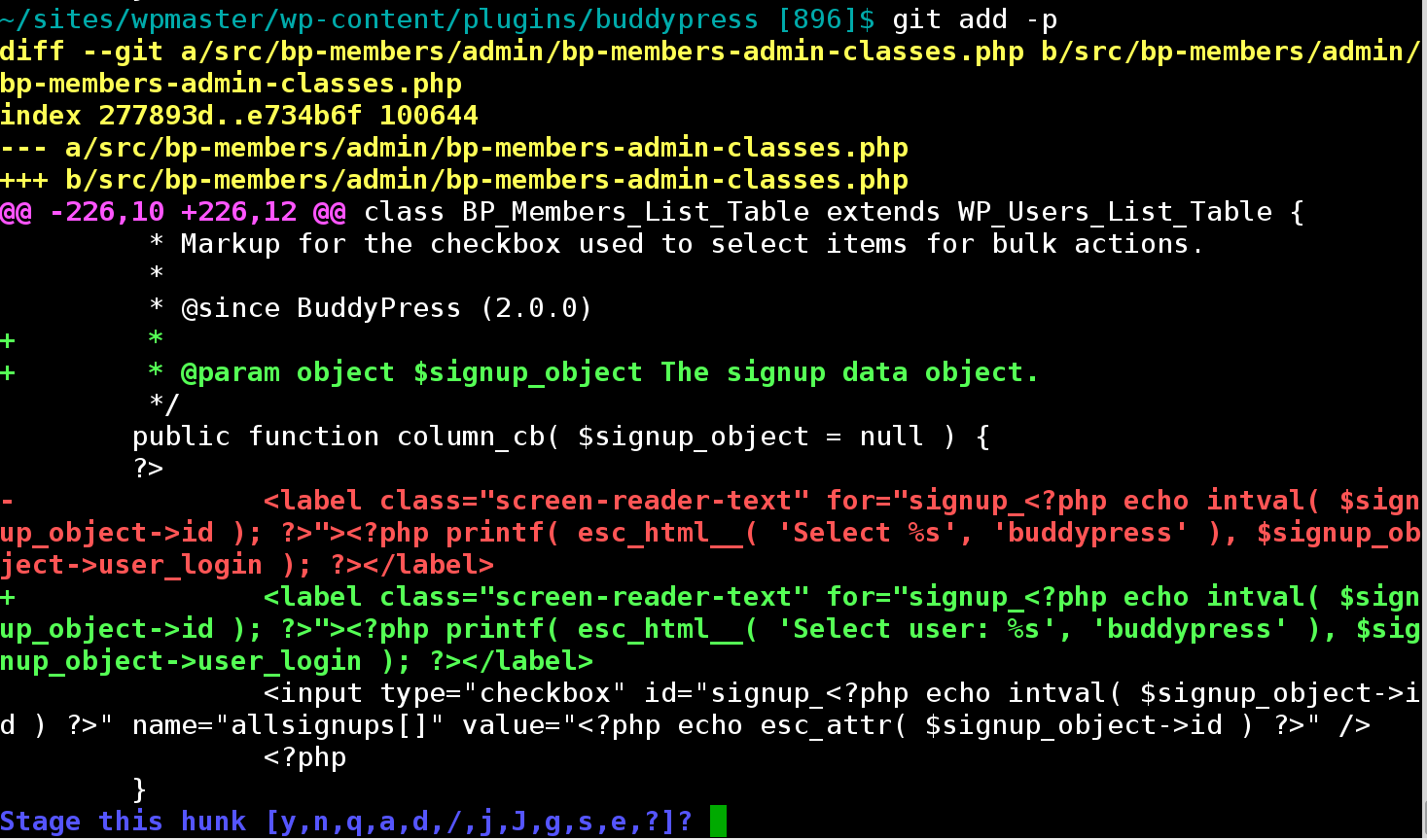 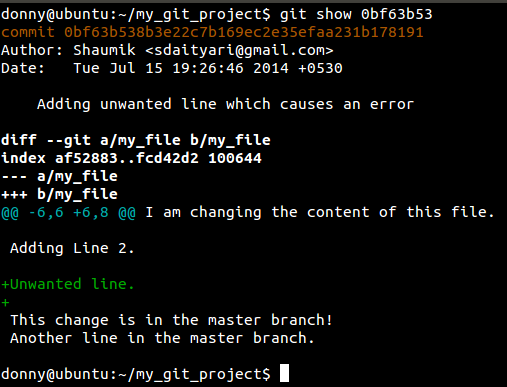 As explained above hunk is a diff and here is a little bit about that. hunk is a term related to diff, and here is how git display it visually (patch):

Does it store two copies that are almost identical? This would be an inefficient use of space, I'd think.

Yes, Git does exactly this, at least at first. When you make a commit, Git makes a (slightly compressed) copy of your source files under the .git/objects/ tree, with a name based on the SHA1 of the contents (these are called "loose" objects). You can go look at these files, and it's worthwhile to do so if you are curious about the format.

The point to remember is that Git is built for speed, and doesn't care very much about the size of the repository data. When Git wants to get an old revision to look at it, all it has to do is read the file as-is from the .git/objects/ tree. No application of deltas, just raw reading bytes with zlib decompression (which is very fast).

Now, you would be correct to observe that after you use a repository for a while, the files in .git/objects/ would contain a great many copies of your source files, all just a little bit different. That's where "pack" files come in. When you create a pack file (either automatically or manually), Git collects all the file objects together, sorts them in a way that will compress well, and compresses them into a pack file using a number of different techniques.

One of the techniques used when creating pack files is indeed, delta compression. Git will notice that two objects look very similar, and store one of the objects and a delta difference between them. Note that this is done on purely an object basis as raw data, without regard to the order in which things were committed or how your branches are arranged. The low level pack file format is an implementation detail as far as the rest of Git is concerned.

Remember, Git is still built for speed, so pack files are not necessarily the absolute best compression you can possibly get. There are a lot of heuristics in pack file creation related to tradeoffs between speed and size.

When Git wants to read an object and it's not a "loose" object, it will look in the pack files (which are in .git/objects/pack/) to see if it can be found there. When Git finds the right pack file, it extracts the object from the pack file, applying whatever algorithm (delta resolution, decompression, etc) is needed to reconstruct the original file object. The higher level parts of Git do not care how the pack file stores the data, which is a good separation of concerns and simplifies the application code.

If you want to learn more about this, I suggest reading the Pro Git book, specifically the sections

How git stores the actual commited files vary over the lifetime of your repository but let's begin with the basics.

When you commit a file to your repository, a new file, a complete copy of this file is made. The SHA1 is calculated from its contents, and this is the "object id" of this file.

You can find this file under .git\objects\SH\A1-hash

The SH\A1-hash there is my way of indicating that the first two characters of the SHA1 is used as a folder name and the 38 rest is used as the filename inside that directory.

Then you modify this file, add it to the index, and commit it.

This is again stored as a completely new file indexed the exact same way as above.

This is very easy to test but bear in mind that whenever you make a commit that changes 1 file you get 3 git objects:

If the file being added doesn't lend itself to compression very well (think jpg, png or zip files), then yes, this will take up a lot of space.

At some point Git may decide to pack your repository, and here Git may decide to use delta-compression (compress and store the differences between files) inside this packfile. However, the rest of Git doesn't see this as this is an abstraction on top of the underlying file access inside Git. The various Git commands implementations will still see the "un-deltified" (if there is such a word) files.

Now, various commands will invariably hide this from you because most of the git commands you use, if implemented well, hides all the underlying abstractions and optimizations from you, the developer, and instead focuses on what you probably want to see.

So if you look at these files, some of the commands will show diffs, where the underlying files aren't stored as diffs, simply because a diff makes more sense to you, the developer.

If you instead go and use the plumbing commands, you will see more of the blobs.

If you want to see how all this work out in practice there is just 1 command you need to know, and that is git cat-file -p SHA1.

Here's a way to test this:

The storage model of Git is not magical or complex at all, but there are lot of optimizations and abstractions in there to avoid wasting space, de-duplication, and so on.

71
Are Git's pack files deltas rather than snapshots?
24
In GitHub URL's: what is the difference between a tree and a blob?
0
How does git store version information