What is “Parse HTML” event in Chrome Devtools Timeline

My understanding of "Parse HTML" events in the Timeline tab of Chrome's devtools has been that they indicate when chrome has finished taking a html-string, tokenizing, lexing and building DOM-nodes from it.

But when I took a look at my timeline I'm finding that this does not seem to be true.

Here are the details for that specific event 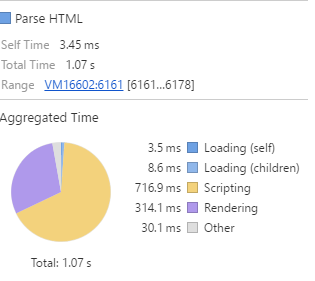 To investigate where the origin of this parsing is coming from, I clicked the "Range" anchor link - expecting to find a block of HTML. But to my surprise this links a script-tag.

Looking further into the details of my event it seems as though Chrome is presenting the Scripting events as being "parts" of the ParseHTML-event... 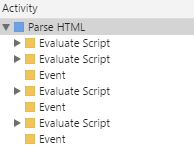 Does in fact, parsing a <script> block always result in a ParseHTML-event which mainly consists of script evaluation events? Or whut am I looking at here?

When you include inline JS on your HTML, or use an external script in the usual way:

Use async to defer scripts so that they don't block the page load:

Or refactor the inline-injected scripts so that they only fire on load, or some later event.

Not the answer you're looking for? Browse other questions tagged html google-chrome-devtools or ask your own question.

2050
What are valid values for the id attribute in HTML?
1263
What characters can be used for up/down triangle (arrow without stem) for display in HTML?
284
What do the crossed style properties in Google Chrome devtools mean?
628
How do I view events fired on an element in Chrome DevTools?
1197
What is the purpose of the “role” attribute in HTML?
409
Freeze screen in chrome debugger / DevTools panel for popover inspection?
318
Chrome DevTools Devices does not detect device when plugged in
5
Under what conditions does the Parse HTML event get called?
1
In Chrome Dev Tools Timeline: What are the gray bars surrounding resource downloads in the network row?
3
Evaluate Script events