Github: Can I see the number of downloads for a repo?

In Github, is there a way I can see the number of downloads for a repo?

You still can use the GitHub API to get the download count for your releases (which is not exactly what was asked)
See "Get a single release", the download_count field.

There is no longer a traffic screen mentioning the number of repo clones.
Instead, you have to rely on third-party services like: 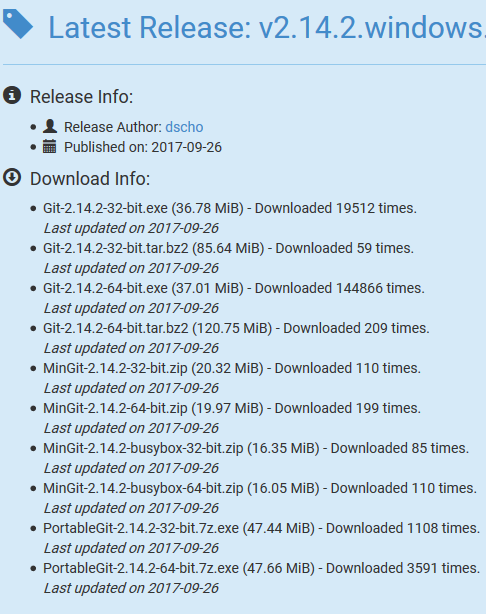 GitHub also proposes the number of clones for repo in its Traffic Graph:
See "Clone Graphs"

As mentioned below by andyberry88, and as I detailed last July, GitHub now proposes releases (see its API), which has a download_count field.

Michele Milidoni, in his (upvoted) answer, does use that field in his python script.
(very small extract)

I am not sure you can see that information (if it is recorded at all), because I don't see it in the GitHub Repository API:

You can only see if it has downloads or not.

Adam Jagosz reports in the comments:

I got it to work with

A couple of things that I had wrong:

I have written a small web application in javascript for showing count of the number of downloads of all the assets in the available releases of any project on Github. You can try out the application over here: http://somsubhra.github.io/github-release-stats/

VISITOR count should be available under your dashboard > Traffic (or stats or insights): 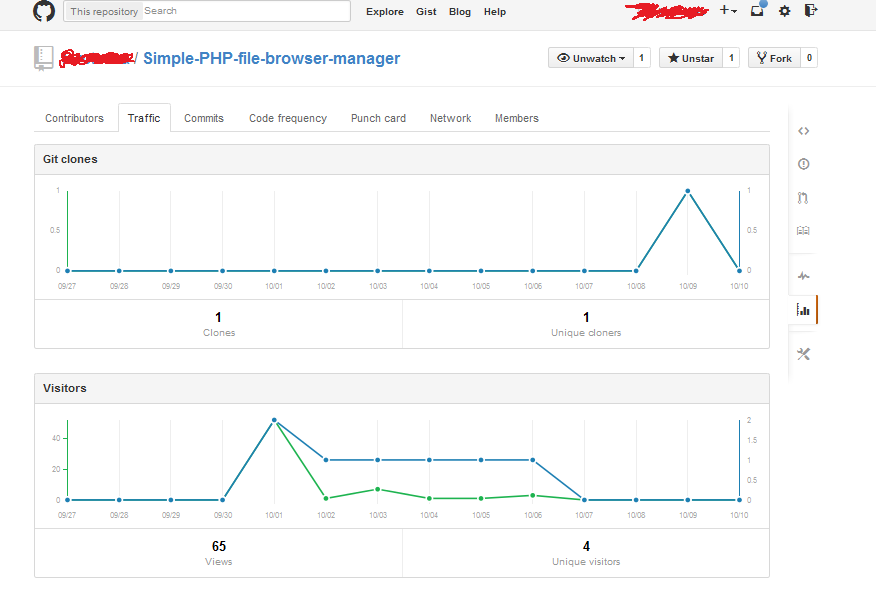 GitHub has deprecated the download support and now supports 'Releases' - https://github.com/blog/1547-release-your-software. To create a release either use the GitHub UI or create an annotated tag (http:// git-scm.com/book/ch2-6.html) and add release notes to it in GitHub. You can then upload binaries, or 'assets', to each release.

Once you have some releases, the GitHub API supports getting information about them, and their assets.

Look for the 'download_count' entry. Theres more info at http://developer.github.com/v3/repos/releases/. This part of the API is still in the preview period ATM so it may change.

GitHub's releases API is now out of the preview period so the 'Accept' header is no longer needed - http://developer.github.com/changes/2013-11-04-releases-api-is-official/

It won't do any harm to continue to add the 'Accept' header though.

Formerly, there was two methods of download code in Github: clone or download as zip a .git repo, or upload a file (for example, a binary) for later download.

When download a repo (clone or download as zip), Github doesn't count the number of downloads for technical limitations. Clone a repository is a read-only operation. There is no authentication required. This operation can be done via many protocols, including HTTPS, the same protocol that the web page uses to show the repo in the browser. It's very difficult to count it.

Recently, Github deprecate the download functionality. This was because they understand that Github is focused in building software, and not in distribute binaries.

To check the number of times a release file/package was downloaded you can go to https://githubstats0.firebaseapp.com

Very late, but here is the answer you want:

Next, find the id of the project you are looking for in the data. It should be near the top, next to the urls. Then, navigate to

The field named download_count is your answer.

EDIT: Capitals matter in your username and project name

The Github API does not provide the needed information anymore. Take a look at the releases page, mentioned in Stan Towianski's answer. As we discussed in the comments to that answer, the Github API only reports the downloads of 1 of the three files he offers per release.

I have checked the solutions, provided in some other answers to this questions. Vonc's answer presents the essential part of Michele Milidoni's solution. I installed his gdc script with the following result

As you can clearly see, gdc does not report the download count of the tar.gz and zip files.

If you want to check without installing anything, try the web page where Somsubhra has installed the solution, mentioned in his answer. Fill in 'stant' as Github username and 'mdcsvimporter2015' as Repository name and you will see things like:

Alas, once again only a report without the downloads of the tar.gz and zip files. I have carefully examined the information that Github's API returns, but it is not provided anywhere. The download_count that the API does return is far from complete nowadays.

I had made a web app that shows GitHub release statistics in a clean format: https://hanadigital.github.io/grev/

I ended up writing a scraper script to find my clone count:

This'll grab the data from the same endpoint that Github's clone graph uses and spit out the totals from it. The data also includes per-day counts, replace .summary with just . to see those pretty-printed.

you will get this json output and you can search for "download_count":

or on command line do:
wget --no-check-certificate https://api.github.com/repos/stant/mdcsvimporter2015/releases

Based on VonC and Michele Milidoni answers I've created this bookmarklet which displays downloads statistics of github hosted released binaries.

Note: Because of issues with browsers related to Content Security Policy implementation, bookmarklets can temporarily violate some CSP directives and basically may not function properly when running on github while CSP is enabled.

Though its highly discouraged, you can disable CSP in Firefox as a temporary workaround. Open up about:config and set security.csp.enable to false.

As already stated, you can get information about your Releases via the API.

For those using WordPress, I developed this plugin: GitHub Release Downloads. It allows you to get the download count, links and more information for releases of GitHub repositories.

To address the original question, the shortcode [grd_count user="User" repo="MyRepo"] will return the number of downloads for a repository. This number corresponds to the sum of all download count values of all releases for one GitHub repository. 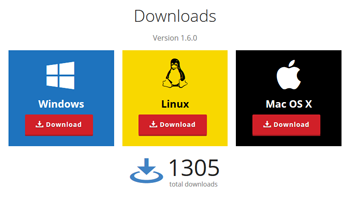 Port into GitHub composite action to reuse workflow code base.

This implementation based on GitHub Actions + statistic accumulation into separate repository: https://github.com/andry81/github-clone-count-badge

I have created three solutions to fetch the download count and other statistics for GitHub releases. Each of these implementations are able to accumulate the GitHub API pagination results, which means that calculating the total number of downloads won't be an issue.

Not the answer you're looking for? Browse other questions tagged github or ask your own question.

90
How to see count of project downloads on GitHub?
95
Is there a way to get download/clone statistics of a git repository?
16
Track number of download of a release (binaries) on Github
7
Getting a link to a Compiled Binary on Github
4
Is there a way to know who downloads my Github repository
2
Github API Returns Empty Assets For Release Array
3
Any way to see the last/number of times a repo has been accessed/downloaded on github?
0
Any way to monitor install numbers of a Windows Application?
0
Git repository usage tracking
-2
how to know someone run a 'git fetch' on my git repo?
See more linked questions

860
Link to the issue number on GitHub within a commit message
4722
How can I determine the URL that a local Git repository was originally cloned from?
1991
Is there a way to cache https credentials for pushing commits?
1478
Download a single folder or directory from a GitHub repo
426
How can I see the size of a GitHub repository before cloning it?
714
Delete forked repo from GitHub
2590
How to add images to README.md on GitHub?
445
How to link to specific line number on github
621
Can you get the number of lines of code from a GitHub repository?