Show matplotlib plots (and other GUI) in Ubuntu (WSL1 & WSL2)

So it seems on ubuntu for windows (windows subsystem for linux) people are suggesting we need to use Agg backend and just save images, not show plots.

How could we get it to where plt.show() would actually show us an image? My current option is to override plot.show() to instead just savefig a plot-148123456.png under /mnt/c/Users/james/plots/ in windows and just have an explorer window open viewing the images.

I suppose I could host that folder and use a browser.

My goal is to be able to run simple examples like the code above without changing the code to ftp the images somewhere etc. I just want the plot to show up in a window.

Has anyone figured out a decent way to do it?

Ok, so I got it working as follows. I have Ubuntu on windows, with anaconda python 3.6 installed.

Anyways, after all that, this code running in ubuntu on wsl worked as is: 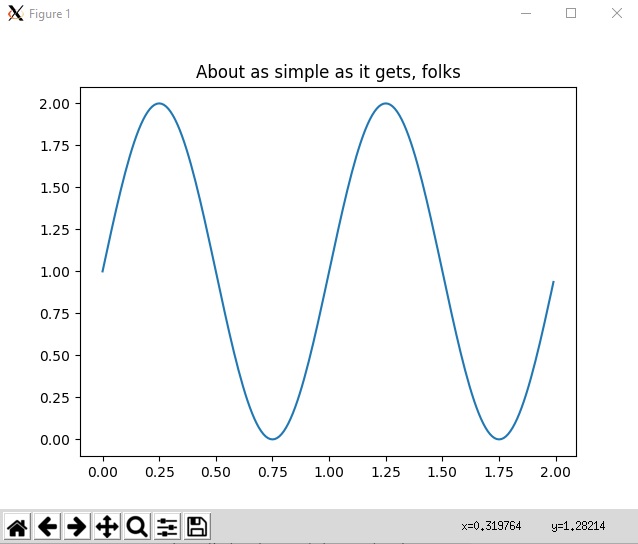 Maybe this is better done through a Jupyter notebook or something, but it's nice to have basic command-line python matplotlib functionality in Ubuntu for Windows on Subsystem for Linux, and this makes many other gui apps work too.

For example you can install xeyes, and it will say to install x11-apps and installing that will install GTK which a lot of GUI apps use. But the point is once you have your DISPLAY set correctly, and your x server on windows, then most things that would work on a native ubuntu will work for the WSL.

Edit 2019-09-04 : Today I was having issues with 'unable to get screen resources' after upgrading some libraries. So I installed VcXsrv and used that instead of Xming. Just install from https://sourceforge.net/projects/vcxsrv/ and run xlaunch.exe, select multiple windows, next next next ok. Then everything worked.

Note: a few WSL2 users got error like couldn't connect to display "172.x.x.x:0". If that's you try to check the IP address stored in DISPLAY with this command: echo $DISPLAY. If the showed IP seems to be wrong (i.e. "8.8.8.8" or another not working IP address) you need to change the code in ~/.bashrc showed in the point 5 to something that will get your instance's ip address. One user said this worked: export DISPLAY=$(ifconfig | grep inet | awk '{print $2}' | head -n 1 | awk '{print $0":0"}'). However for some others it did not work. YMMV, but just find your IP and use if for DISPLAY. For most WSL2 users, the command in #5 works.

Edit for Windows 11 : if MS convinced you to throw out your old computer and buy one with a TPM and so you got Windows 11, you get GUI for free. I hope they add upgrade path to do that on Windows 10 because Win10 will be like XP and last a long time since MS decided you need recent computer even though Win11 would work fine on old computers.

Plots are also viewable on WSL using Visual Studio Code, which as of the June 2019 release, includes a "Plot Viewer".

In a regular .py file, inserting a comment string #%% marks the code as a Jupyter (IPython) cell and a code lens shows options to Run Cell. In addition, right-clicking inside a Python file includes the option:

The June 2019 update included a brand-new Plot Viewer that can be used to manipulate any image plots, such as the popular matplotlib plots.

You can try it out by double-clicking on the plots or clicking on the “expand image” button that is displayed when you hover over plot images in the Python Interactive Window:

With the plot viewer, you can pan, zoom in/out, navigate through plots in the current session, and export plots to PDF, SVG, or PNG formats.

To get matplotlib to work with GTKAgg on Bash on Ubuntu on Windows, I:

Uninstalling the pip-installed matplotlib and reinstalling it via apt appear to be necessary because pip does not include the C extensions needed to run GTK, but the apt version does.

For WSL2 using Ubuntu Focal Fossa release, I downloaded and installed VcXsrv on Windows. I use this configuration: 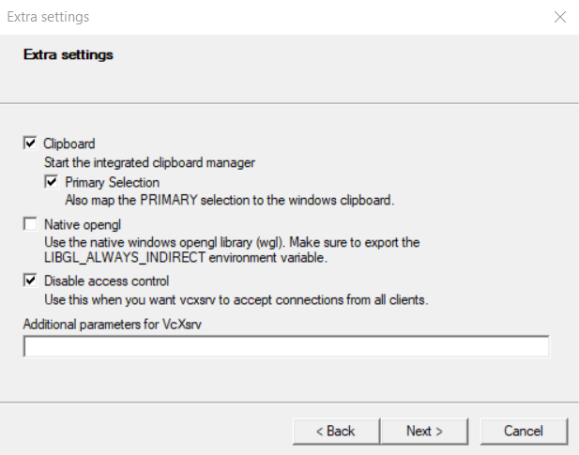 I don't know for Native OpenGL but it seems important to disable access control.

Now, you need to export the env variable DISPLAY in WSL.

I found the correct address in /etc/resolv.conf, but the one found in the ifconfig result isn't. So the following command doesn't work for me:

That IP address can also be found in the command ipconfig into CMD.exe command context. Search for vEthernet (WSL), that should be the one.

Now, you can test that everything is working by simply executing xcalc in your WSL environnement. If xcalc is not present, install it:

xcalc command should open a application looking like this on Windows: 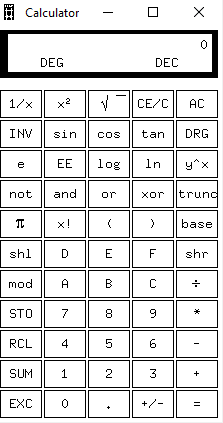 If it is working that means that the connection to your X-server is possible but you maybe need to install some extra package for Python like:

Change .x according to your python version.

With Windows 11 22000, Linux GUI apps are officially supported out of the box provided pre-requisites are met. No twaeks, No hacks, No firewall changes etc.

In my case (Windows 10, WSL2, Ubuntu 20.04 with miniconda3 and virtual environment where I installed all the required Python 3.6 packages using conda command, Windows-based Visual Studio Code with 'Python' and 'Remote - WSL' extensions) I installed VcXsrv under Windows, and added

to .bashrc file in Ubuntu. Also, before running Python code from WSL, we have to launch XLaunch and select 'Disable access control' (I left 'Native opengl' checked as well). In project folder, do not name your Python file as matplotlib.py (some related issues are reported here).

In two seperate instances (wsl1 & wls2 with ubuntu 20.04) while using PyQt5 I was missing several libxcb libraries (e.g. libxcb-icccm4) which was not printed when trying to plot. I used export QT_DEBUG_PLUGINS=1 to find out which ones and then simply installed them. Basically the steps here.

Now you can install matplotlib

Not the answer you're looking for? Browse other questions tagged python linux matplotlib windows-subsystem-for-linux or ask your own question.