Create Grid in R for kriging in gstat

The intro to the gstat package in R uses the meuse dataset. At some point in this tutorial: https://rpubs.com/nabilabd/118172, the guys makes use of a "meuse.grid" in this line of code:

I do not have such a file and I do not know how to create it, can I create one using these coordinates? Or at least point me to material that discusses how to create a custom grid for a custom area (i.e not using administrative boundaries from GADM).

Probably wording this wrong, don't even know if this question makes sense to R savvy people. Still, would love to hear some direction, or at least tips. Thanks a lot!

Total noob at R and statistics.

EDIT: See the sample grid that the tutorial I posted looks like, that's the thing I want to make.

I am going to share my approach to create a grid for kriging. There are probably more efficient or elegant ways to achieve the same task, but I hope this will be a start to facilitate some discussions.

The original poster was thinking about 1 km for every 10 pixels, but that is probably too much. I am going to create a grid with cell size equals to 1 km * 1 km. In addition, the original poster did not specify an origin of the grid, so I will spend some time determining a good starting point. I also assume that the Spherical Mercator projection coordinate system is the appropriate choice for the projection. This is a common projection for Google Map or Open Street Maps.

I am going to use the following packages. sp, rgdal, and raster are packages provide many useful functions for spatial analysis. leaflet and mapview are packages for quick exploratory visualization of spatial data.

2. Exploratory Visualization of the station locations

I created an interactive map to inspect the location of the four stations. Because the original poster provided the latitude and longitude of these four stations, I can create a SpatialPointsDataFrame with Latitude/Longitude projection. Notice the EPSG code for Latitude/Longitude projection is 4326. To learn more about EPSG code, please see this tutorial (https://www.nceas.ucsb.edu/~frazier/RSpatialGuides/OverviewCoordinateReferenceSystems.pdf).

The mapview function will create an interactive map. We can use this map to determine what could be a suitable for the origin of the grid.

After inspecting the map, I decided that the origin could be around longitude 123 and latitude 7. This origin will be on the lower left of the grid. Now I need to find the coordinate representing the same point under Spherical Mercator projection.

I first created a SpatialPoints object based on the latitude and longitude of the origin. After that I used the spTransform to perform project transformation. The object ori_t now is the origin with Spherical Mercator projection. Notice that the EPSG code for Spherical Mercator is 3857.

To see the value of coordinates, we can use the coordinates function as follows.

4. Determine the extent of the grid

Now I need to decide the extent of the grid that can cover all the four points and the desired area for kriging, which depends on the cell size and the number of cells. The following code sets up the extent based on the information. I have decided that the cell size is 1 km * 1 km, but I need to experiment on what would be a good cell number for both x- and y-direction.

Based on the extent I created, I can create a raster layer with number all equal to 0. Then I can use the mapview function again to see if the raster and the four stations matches well.

I repeated this process several times. Finally I decided that the number of cells is 250 and 200 for x- and y-direction, respectively.

Now I have created a raster layer with proper extent. I can first save this raster as a GeoTiff for future use.

Finally, to use the kriging functions from the package gstat, I need to convert the raster to SpatialPixels.

The st_grid is a SpatialPixels that can be used in kriging.

This is an iterative process to determine a suitable grid. Throughout the process, users can change the projection, origin, cell size, or cell number depends on the needs of their analysis.

If you have your study area as a polygon, imported as a SpatialPolygons, you could either use package raster to rasterize it, or use sp::spsample to sample it using sampling type regular.

If you don't have such a polygon, you can create points regularly spread over a rectangular long/lat area using expand.grid, using seq to generate a sequence of long and lat values.

@yzw and @Edzer bring up good points for creating a regular rectangular grid, but sometimes, there is the need to create an irregular grid over a defined polygon, usually for kriging.

This is a sparsely documented topic. One good answer can be found here. I expand on it with code below:

Consider the the built in meuse dataset. meuse.grid is an irregularly shaped grid. How do we make an grid like meuse.grid for our unique study area? 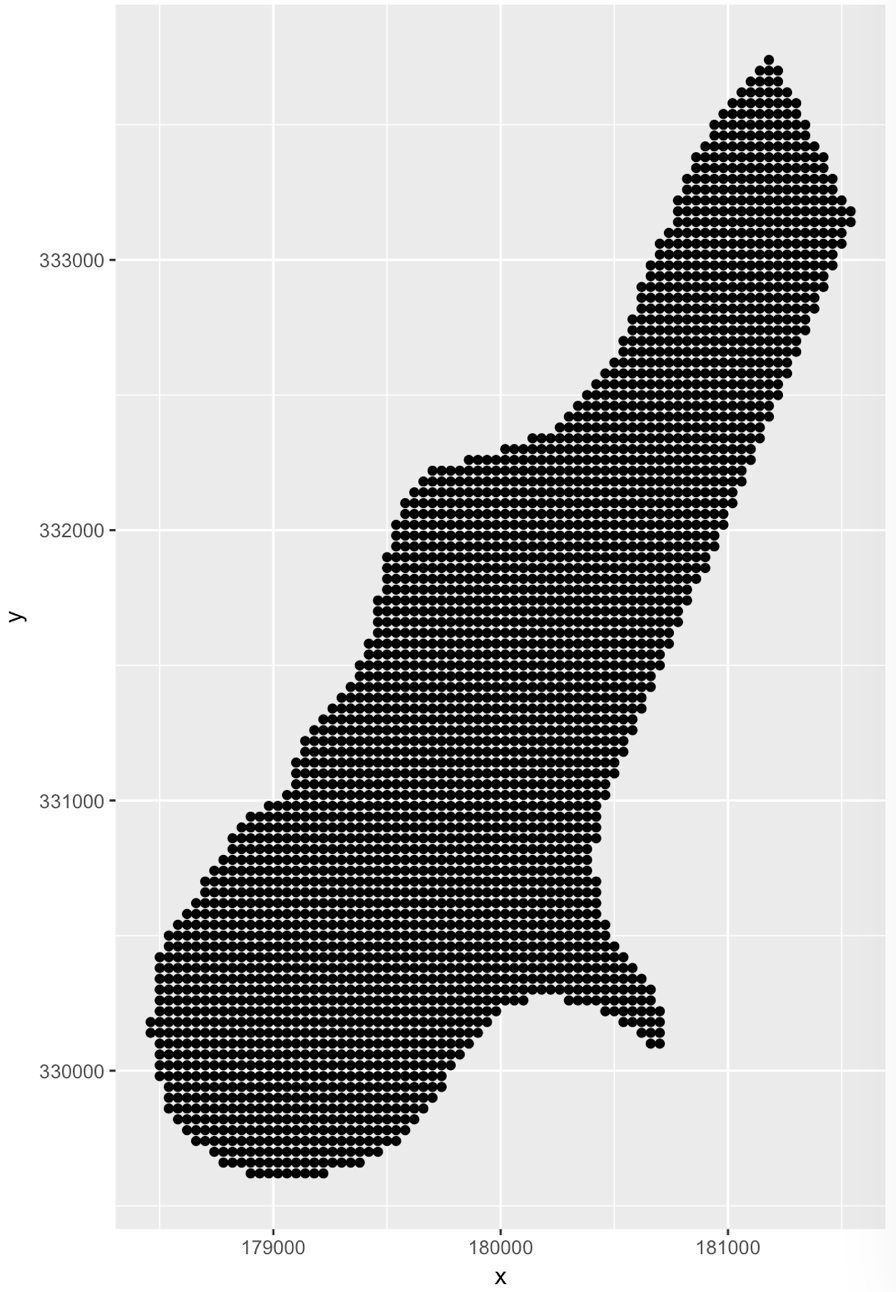 1. Make a rectangular grid over your SpatialPolygonsDataFrame

2. Convert the grid to SpatialPoints and subset these points by the polygon.

3. Visualize your clipped grid, which can be used for kriging.

Not the answer you're looking for? Browse other questions tagged r spatial kriging gstat or ask your own question.