When I try to install mysql-server, an error comes like:

What does it mean. Any ideas?

dpkg returning an error code 1 doesn't mean anything specific but it usually has to do with dependency issues. In your case, you tried to install two versions/instances of the same package i.e. mysql-server and mysql-server-5.7. So do the following to remove any redundant dependency issues and install a functioning mysql package

this should fix the problem at hand. But in the future, have care about the package names you add after sudo apt-get install since the wrong list of package names - for example redundant entries in the list - results in failure to install either of the packages or worse - you might even find yourself wading through the hellish depths of #DEPENDENCY-HELL

All of the answers I've been able to find for this question have been of the form "purge your Mysql install and re-install it." But in my case, I already have a working/active Mysql install. For me, the reason why dpkg --configure -a fails is because Mysql is already installed. Why dpkg thinks that the postinstall script needs to be run for my already-installed-and-upgraded Mysql I may never know, but it does.

After considerable time scouring for answers, I found a solution that should work if there are others who already have a working Mysql 5.7 and just want to get past this bogus postinstall script. You can edit the postinstall script directly as (on Ubuntu):

And then, on the second line, just add exit 0 and then run dpkg again and you should get something like:

You definitely would not want to follow these instructions if your Mysql installation had not previously completed (there's a reason that the postinstall script insists on running). But for those who might end up with dpkg in a wonky state, as I have, the above can save you a lot of time purging and reinstalling an already-working version of Mysql.

If you're on a VPS or similar, your error may be due to lack of RAM.

Running apt-upgrade seems to require some RAM, so it may force-close mysql, hence the problem to recover from the error.

1) Stop mysql manually before any apt-upgrade

(if version not known, use just mysql-server to find out (will not fix error)

Start mysql manually if it wasn't started by apt.

I had a similar issue. This is how I fixed mine.

My answer from askubuntu.

None of the apt methods worked for me, try this:

i face same error due to problem in my upgrade from ubuntu 18.04 to ubuntu 20.04 , what i did is get mariadb instead also make sure when you do pruge mysql that if asked you to remove dbs in the dir tell it not to delete the dbs so you will have your old databases with no data loss

what i did was this cmds

I tried almost every possible way but nothing was working for me. Then I found the problem that I was facing was due to less available ram. You can check your current ram status by free -h (in my case available was less than 1 GB). To clear ram restart your device. Then type following commands

then again install mysql-server by

try this solution using aptitude this will replace all the file corrupted.

In my case I had to run:

to stop MySQL before being able to install mysql without errors using:

To solve the dependency issue, try:

And reinstall the package again by: sudo apt-get install mysql-server.

Other commands to try:

Related: How can I Resolve dpkg dependency? at Ask Ubuntu.

The problem can be much simpler (in my case) I had a missconfigured value in my configuration file [my.cnf] which lead to the error. After cleaning up my.cnf mysql-server was restarted successfully

If you are working on Debian 10, you need to first install GNUPG:

That's all; now you can try dpkg again.

Finally, run mysql --version to make sure there is no version on your machine and you can try installing again.

I came across the yes Unix binary, which is incredibly stupid: it just endlessly types y (try it, you can just run yes in your terminal)

so the following just works (I used this in a dockerfile)

I had another mysql process running in background. (ckeck if your lampp mysql server is on, Then turn it off.) then try sudo apt dist-upgrade

if lammp mysql is not working then, check this command, ps -eaf and then look for mysql process and kill it by it's port number sudo kill -9

I was in the same situation. After completely removing MySQL, I reinstalled it, killed the PID using port 3306, and reinstalled MySQL again. It's working now. 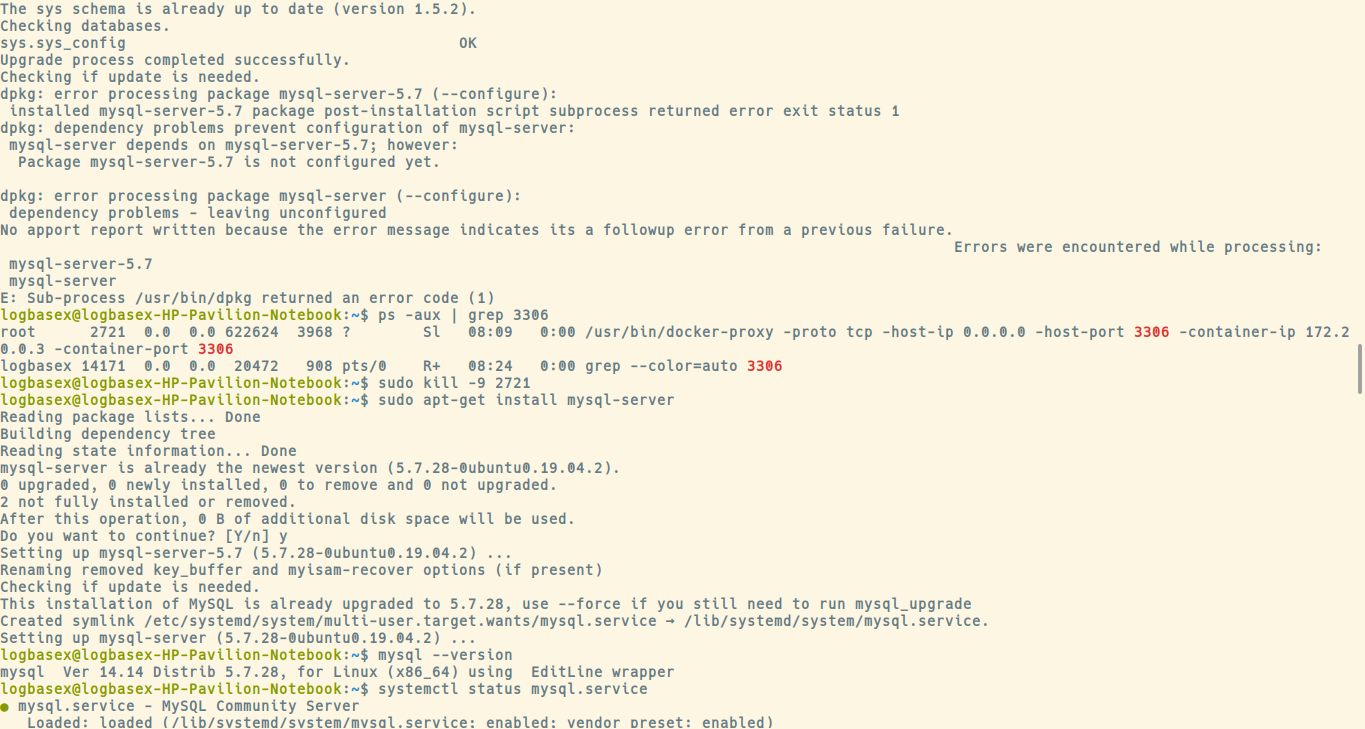