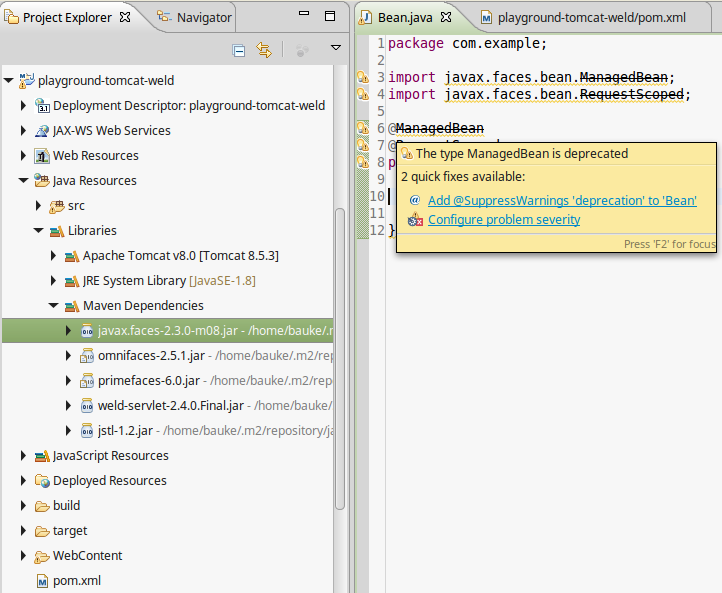 Since Faces 4.0, the @ManagedBean has been removed as per spec issue 1547.

24
Difference between @Named and @ManagedBean annotations in JSF2.0 Tomcat7
13
Inject vs ManagedProperty
7
The type ManagedBean is deprecated
1
What is the difference between using RequestScoped (faces) and RequestScoped (context)
2
Difference between RequestScoped/SessionScoped in javax.faces.bean and javax.enterprise.context
0
StreamedContent not getting populated beyond RENDER_RESPONSE
0
Dynamically updated commandLink not working JSF
143
Identifying and solving javax.el.PropertyNotFoundException: Target Unreachable
140
Migrating from JSF 1.2 to JSF 2.0
105
Get JSF managed bean by name in any Servlet related class
See more linked questions

7
JSF2 : inject service objects to managedbean from Spring?
4
Using CDI (Context & Dependency Injection) backing beans instead of Managed Beans
0
Why is my Glassfish3.1.2.2/MyFaces2.1.9/JSF-managed performing better than TomEE1.5+/CDI-managed?
0
NotSerializableException on ViewScoped ManagedBean with CDI Injected properties
2
Does Spring Framework come with its own beans?
1
Can other servlets access cdi beans in jsf application?
2
JSF-2.3 not finding my @Named CDI-1.2 managed bean
1
Can't find beans annotated with @ManagedBean
0
CDI Bean method not called when using myfaces bundled in webapp and run on Wildfly