I've recently run into this problem after having used docker toolbox without a problem for a while.

Still get the same error

This answer is not specifically related to Docker, but seeing as this is one of the more recent top Stack Overflow search results (together with this question) on Google when searching for the "Failed to create the host-only adapter" error message from VirtualBox, I'm leaving this here in the hope that it will help someone else.

As a side note, if you can, I recommend you use Docker For Windows instead of Docker Toolbox to run Docker on Windows (requires Windows 10 Professional or Enterprise 64-bit).

Because I use Hyper-V, I had a number of Hyper-V Virtual Ethernet Adapters in addition to the actual physical adapter. 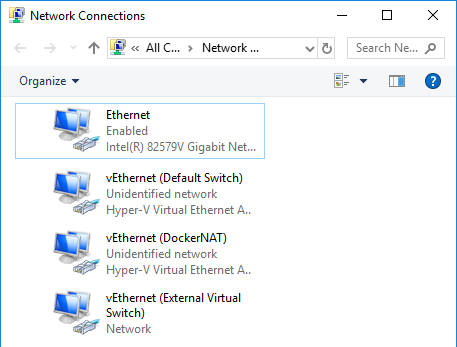 Looking at the properties of the physical adapter, it appears to be normal for Hyper-V to turn off all of the protocol drivers except for "Hyper-V Extensible Virtual Switch". Windows then gets its network connectivity through one of the virtual adapters, in my case it's called "External Virtual Switch", and the usual set of protocol drivers (TCP/IPv4 etc.) is enabled there. 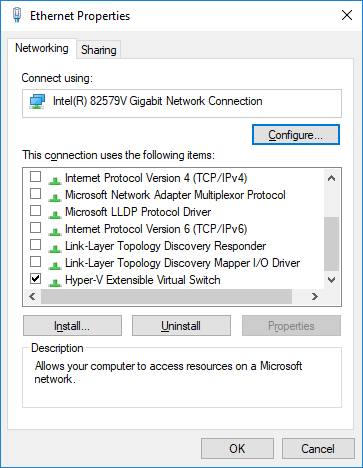 I then noticed that VirtualBox appears to (want to) work in a similar fashion, because it had managed to install and enable a new protocol driver called "VirtualBox NDIS6 Bridged Networking Driver". 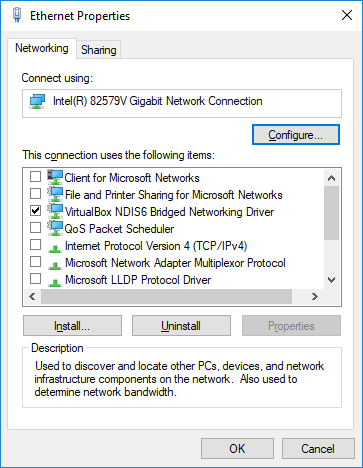 I think at this stage I threw in a good old reboot for good luck, though I doubt whether that was actually necessary. When I subsequently tried to create the VirtualBox host-only adapter again, it worked! (I actually got an error message from VirtualBox, in a modal that I had to find on the taskbar, about the adapter name already being used. However a new "VirtualBox Host-Only Ethernet Adapter" showed up under the Windows Network Connections and when I closed and re-opened the VirtualBox Host Network Manager window, the adapter showed up there too.)

My theory is that VirtualBox is for some reason unable to determine which adapter is the actual physical network adapter, and in a rather gung-ho manner goes ahead and enables its "VirtualBox NDIS6 Bridged Networking Driver" on every adapter that it finds.

Furthermore it then appears to be unable to determine which adapter it needs to create its virtual "wrapper adapter" for and fails.

Even if you don't use/have Hyper-V, you might have multiple adapters including virtual ones (lots of VPN software installs virtual adapters too, for example).

You can try disabling the "VirtualBox NDIS6 Bridged Networking Driver" on all but your actual physical network adapter(s) before attempting to create the VirtualBox host-only adapter again.

This is certainly not a new issue for VirtualBox judging by the large number of related tickets on their public bugtracker and in other places, some more than 2 years old. I have a feeling that for a lot of people the problem might be related to what I have described above, so hopefully this helps them.

Hmm, in retrospect I'm not sure how normal it is for Windows to use the Hyper-V "External Virtual Switch" for network connectivity. If I remember correctly the "Default" switch that Hyper-V creates and which provides connectivity to guests via NAT is a relatively new thing and before it was necessary to add and use the "External" switch... On my home PC, without an "External" switch, the normal (TCP/IPv4 etc.) protocol drivers stay enabled on the physical network adapter and the "Hyper-V Extensible Virtual Switch" is disabled both on the physical and on the virtual adapters. I haven't had a chance to test what happens if I add a new "External Virtual Switch" under those circumstances.

tl;dr If you are using Trend Micro or Symantec antivirus solutions, try uninstalling Virtualbox, then re-install it with the antivirus disabled. It may work with others as well.

I am adding this answer for the record.

My coworkers and I started having a similar issue just after updating from Windows 10 Pro version 1703 to version 1709.

I tried rolling back to version 1703, and it worked, but of course this is not an acceptable solution.

The issue has been reported in the Virtualbox forum and issue tracker:
https://forums.virtualbox.org/viewtopic.php?f=6&t=86179#p413876
https://www.virtualbox.org/ticket/17354#comment:22

Unfortunately, this error is quite frequent, and it has been reported dozens of times with different causes. In our case, the settings shown in bszom's answer were already correct.

I was able to get this working by disabling all of the network adapters, besides the physical one, during installation. Once installation is complete you can re-enable them. To disable the adaptors, do the following steps:

I have the same error as you. In my case when I open VirtualBox after got error, it alerts that the VirtualBox is needed to update. So I install the newest one and open the "Docker Quickstart Terminal" shortcut again eventually, it worked. So I think that install the virtual box again or install before installing Docker ToolBox may solve this problem. ( i know there is someone install it first ). good luck.

I was able to resolve the problem with the latest Virtualbox version 6.0.14

Unfortunately I also had the Issue (Win10, 1709,virtualbox 5.1). While Using vagrant to pull linux images from the web.

Get your network drivers to the latest stand

Check if you have the "host only" virtual adapter in your network adapters config. If yes than you're good to go. If not. Try to install it from vboxmanage.

I had this issue on one type of computer of my company but not on others types. So this must be related to the type of network adapter itself. so sometimes you are lucky sometimes not. But I was more lucky having hardware to the latest stand.

I got the same error.

The device's status stated that there was a signature problem for some reason.

I'm not encouraging anyone to ignore the warning, but I chose to do that :)

I turned off Window's signature verification using the method described in this link and I could finally use Virtualbox with a host-only adapter.

Note: this answer was duplicate. I've removed the other ones

I got to the same error.

But I don't have "VirtualBox NDIS6 Bridged Networking Driver" in properties of physical connection. A have same driver "NPCAP ..." from wireshark installation. If look at description you can see this is NDIS6 driver.

Then I remove all wireshark packages: NPCAP, WinPCAP, Wireshark and remove VirtualBox.

That works for me.

I uninstalled wireshark, docker tooltip and VirtualBox.I also deactivate the antivirus temporary. Then, i installed docker tooltip without selecting install NDIS5 and it worked for me.

I first installed Docker Toolbox yesterday since I have Windows 10 Home which does not support Docker Desktop.

Rebooting or installing Java did not solved it for me. What did was to delete Oracle's VM that was installed with the Toolbox (5.2.12 or something), and reinstall the new 6.1.8. Checking their website, this makes sense: 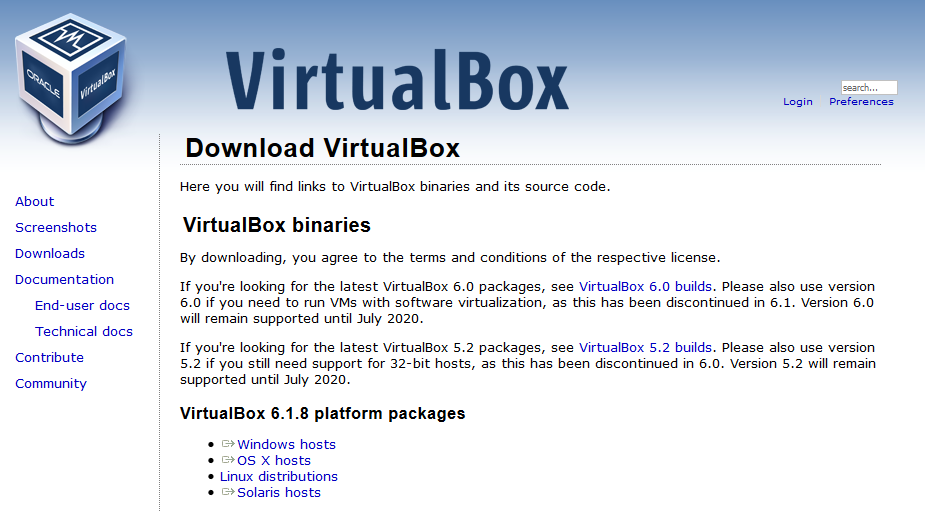 Above solutions do not work for me, so I have installed the Virtual Box separately from here.

I got the same error:

but in my case I was trying to install Docker Toolbox on Windows 8.1 64-bit.

Previously, I had virtualbox version 6.0 installed on my system, so I unchecked the docker toolbox installer option, install virtualbox.

For my scenario it worked to uninstall virtualbox 6.0 reboot the system and install VirtualBox-6.1.12-139181

Note: As uninstaller use this tool.

And ready docker in windows 8.1 running.

Not the answer you're looking for? Browse other questions tagged docker virtual-machine virtualbox docker-machine docker-toolbox or ask your own question.