I am using native base for making app in react-native. I am new to both things. When I run the app It gives me this error: 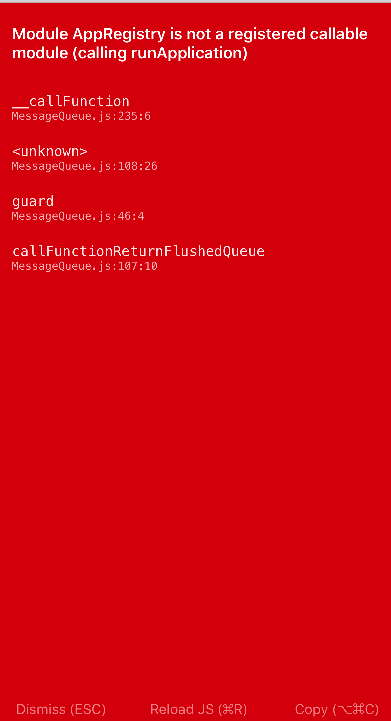 Here is the screenshot of my versions

Clear the cache with the following command:

You should have this at the bottom of the index.ios.js file AppRegistry.registerComponent('Point', () => Point); and also import AppRegistry from react-native

I had this issue - it was odd because I reset my repo to a time when the app was working. The issue was with my simulator (iOS).

For me the solution was to

Close the current Metro Bundler and restart by typing the comment:

I tend to get this error after I install a new package that has some native code that needs to be installed with it. Usually packages will say install npm module and then install native code via a pod install (ios specific) and after this my app usually throws this error.

In order to get rid of this error I delete and reinstall node_modules and pods since I am making an iOS app and then I also delete the build folder under ios. After that I run the packager with npm start -- --reset-cache and build my app again using the react-native run-ios command. This fixes the issue for me.

In my case, trying npm start -- --reset-cache and getting a bunch more errors, I deleted (uninstalled) the app from iOS and Android and yarn ios yarn android did the trick.

Worked for me for below version and on iOS:

and you can see there is no app registry like this

but i have to do this to run my app

Just closing the metro bundler and rebuilding the app done my job.

I ended up creating an entirely new react-native project after a computer restart and after the deletion/rebuild of the npm_modules folder, Pods folder, and my ios build folder did not work. (Quitting the Simulator, Quitting the Terminal app, Quitting XCode, cleaning the project folder in XCode, and running killall -9 node, npm start -- reset-cahce & npm start -- --reset-cache did not work, either). After installing all my packages, I copied and pasted my code from my old project to the new one. Same error. So then I started backtracking my most recent code changes, step by step. After reverting my most recent code changes, it worked. While adding new code little by little, I got an error telling me I forgot to import {StyleSheet} from 'react-native';. I imported that, then continued adding my code that had previously led to the error (which was simply a react-native-elements Button and a StyleSheet const styles). All went well.

So, in the end, my only theory is that I had added too much code at once, and instead of telling me I forgot to import {StyleSheet} like it should have, it instead threw me a vague and infuriating module AppRegistry error.

This happens for one of these reasons:-

For me, restarting my computer appears to be enough to clear this issue.

It's often required after I've switched between branches, or merged branches using git.

If you are using windows and running yarn open cmd on admin mode' terminate and Restart the node process by typing this command.

In my case, I didn't import a module in a component that I was using it in.

So, just check if you are importing the module you want to use...

One of the libraries has not been linked. To check, just comment out in the package.json one by one the latest libraries added.

Then run the app with xcode and puf !

If your are building a new npm module and this rely on some other dependencies already added in your project, you need to add those dependencies in the package.json of the npm package as peer dependency.

For me, the issue was starting the metro bundler when there was an error in one of my styles. I had an error in my code from last night, and then my computer did a restart overnight. Trying to start everything up today resulted in this error along with Invariant Violation: Invalid prop 'position' of value 'fixed' supplied to. Fixing the position value resolved both errors.

One single error but there might be multiple causes. Seeing a lot of diverse discussions in the community means this issue could be hard to find. Try to proceed with the following.

If you still cannot find the issue with the above, remove some imports or screens from your App.js. Going with this you can find what exactly caused this error. This is how I found my issue after a day of research.

closing your current metro bundle and run this :--

I was also suffering from the same error for windows OS. I resolved this by cleaning gradlew.

The solution is very simple just kill all the running nodes and restart your node server and rebuild your native application and it works.

Note: If that too doesn't work then just restart your computer, it'll definitely work then.

Not the answer you're looking for? Browse other questions tagged react-native native-base or ask your own question.